BACK TO ALL NEWS
Currently reading: Seat Alhambra revealed - official
UP NEXT
Britain's Best Driver's Car 2020: The main event

The new Seat Alhambra has been formally revealed.

Based on the New VW Sharan, which was unveiled last month, details of the Alhambra were released after the car was caught running undisguised by spy photographers.

Read our review of the Volkswagen Sharan

Like the Sharan, the Alhambra will be built on VW’s new flexible MQB platform. As a result, the Alhambra is 22cm longer and 9cm wider than the outgoing model, and weighs less.

The Alhambra will also keep rear sliding doors, while the third row of seats can be moved back and forth 160mm to accommodate both adults and children. Both the second and third row of seats will fold flat, extending the load area from 885 litres in five seat configuration to 2297 litres.

In line with the Sharan, new optional kit includes bi-xenon headlamps with adaptive control and automatic headlight dipping, park assist, which automatically parrallel parks the car, a rear viw camera and a sliding panormaic roof. The sliding door can also be fitted with electric motors.

Seat has yet to set a launch date for the Alhambra.

Follow us on FacebookSee all the latest Seat Alhambra reviews, news and video 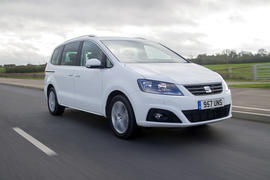 The Seat Alhambra refined and extremely competent seven seat MPV, but it is short on flair

Rover P6 3500S wrote:
But why would you spend £21,315 on a boggo Audi A4, with no kit at all, when a comparable and better-equipped Passat is about 18k and a Skoda Superb, with a plusher, better-equipped and more spacious cabin than either of its sisters

There are obviously better ways to spend your money, but park an Audi outside someones office and it says something a VW or Skoda doesn't. I don't know if that's just the UK (i guess not from the sales figures worldwide) but it tells you something about people.

Yeah, it tells you that they're badge snobs and total idiots with it. A Skoda Superb is a much better car than, dare I venture it, an Audi A5 Sportback? Yet it's thousands cheaper... I know which one I'd have. I've been a Rover/BMW/Jag/even Merc fan not because of the snob value of the badges (yes, Rover and Merc were once both above Jag and BMW in the prestige stakes, for younger readers who only remember the crap Rovers and rusty, unreliable Mercs, like the W210 E-class), but because of their looks or their engineering. I love the Rover SD1 in spite of its primitive engineering, because it sounds like a Corvette, goes like one with a bit of tuning, and looks like a Ferrari Daytona, while easily accomodating five plus luggage, and achieving a quite decent aerodynamic Cd (about 0.32, I seem to remember!). I love the P6 for the opposite reason: it was a remarkably innovative car, but didn't shout about it and had very functional, almost styleless looks. Same went for a lot of Mercs and BMWs. Thoroughly well-engineered without being the height of style. I couldn't give a damn what the snobs think of the badge on the car, and, if the BMW E39 had also been available for 4k less a model with a Rover badge on it, I'd have had the Rover. Not just because of my thing about RWD Rovers, either.

Sales of Audi's like the rest of the VAG group are continuing to go up. Audi is now selling on a line with Merc and BMW.

You are right that VAG is putting similar cars on shared platforms but they are finding different buyers.

It's been hugely successful and yet other companies have failed with a similar approach.

Lol , a bright orange cupra one