BACK TO ALL NEWS
Currently reading: Road test rewind: BMW 5 Series
UP NEXT
2022 Audi E-tron set for major upgrade

The E60-generation BMW 5 Series 535d wasn’t just a quick diesel saloon: in 2005, it was the quickest diesel we’d tested. Here's how it performed in the Autocar road test:

BMW has offered diesels for only 21 years whereas Mercedes has been selling them since 1936, but Munich’s first – the 524td – was 1983’s fastest and vaulted the company to the forefront of diesel technology. Last year, 54% of UK 5 Series saloons (and 74% of Tourings) were diesels.

Those numbers are likely to rise with the new 535d. It uses the 530d’s all-alloy 2993cc six-cylinder engine, but with an extra turbocharger, strengthened crankcase and modified common-rail injection system. The turbos blow sequentially, like the Porsche 959’s nearly two decades ago. By 2000rpm, the second, larger turbocharger is spinning, the two in tandem providing the 413lb ft peak. At higher revs, the second turbo works alone, yielding 272bhp at 4400rpm.

This is our first test of a Sport version of the 5 Series. The basic suspension layout of MacPherson front struts with a multi-link rear is unchanged, but the Sport gets stiffer springs, revised dampers and a 15mm-lower ride height.

The 535d offers the throttle response of a large, naturally aspirated petrol and the kind of instant torque delivery drivers of Volkswagen’s 5.0 V10 TDI enjoy. Performance is deceptive: only the flashing DSC stability control light hints at how hard the rear tyres are working to deliver that torque to a wet road. There’s no early let-up in power, either: usable power lasts right up to the 5000rpm redline. 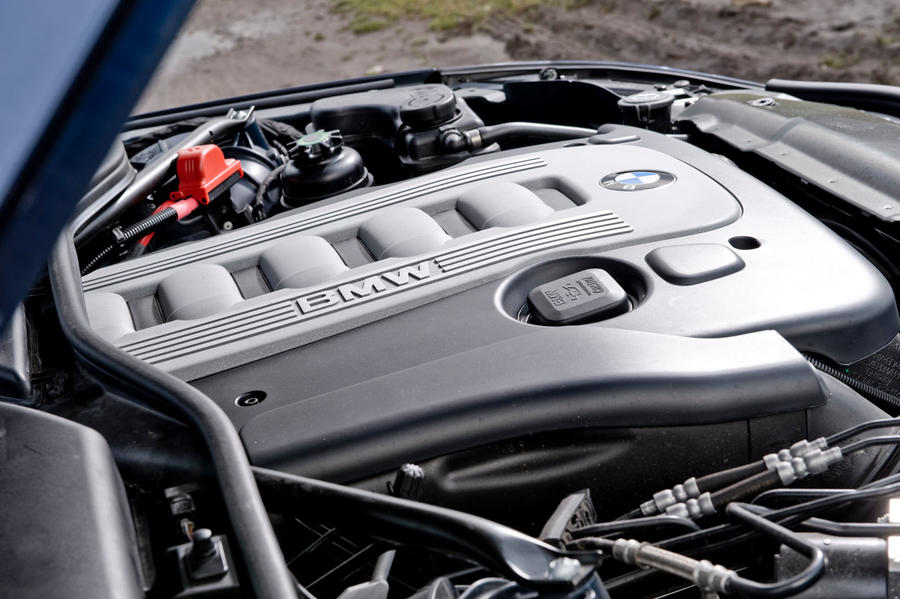 The heightened agility provided by the Sport suspension, pleasingly weighted, accurate and feelsome steering and excellent body control all make the 535d an excellent car to drive quickly. With so much torque available, tyre-smoking oversteer is just a DSC button push and throttle jab away.

BMW claims that the Sport shares a similar suspension set-up with the surprisingly supple M5, making the only explanation for the 535d’s harsh ride, once again, the run-flat tyres the M5 does without. At lower speeds, the Sport’s reaction to broken Tarmac is little short of appalling. It’s just not good enough, especially at this price. 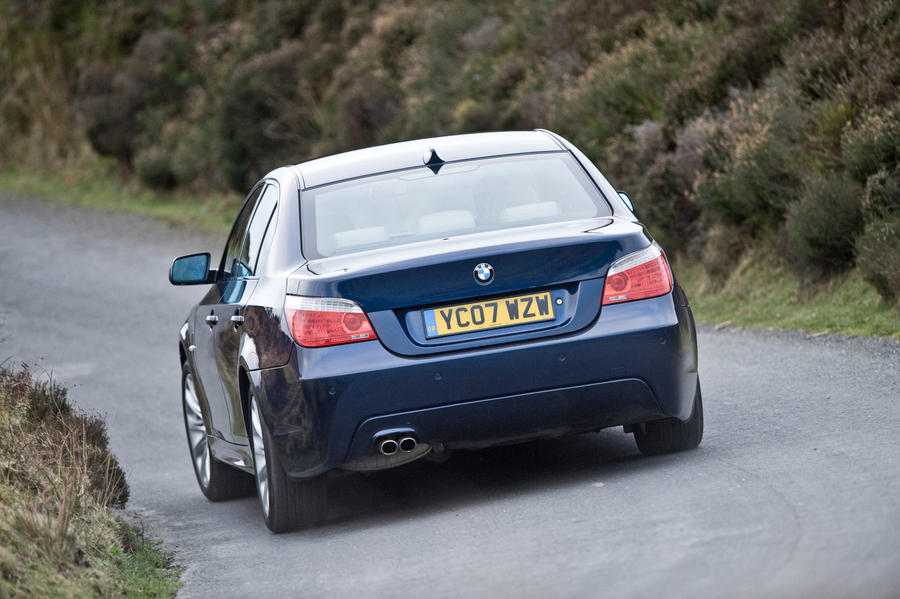 This is a diesel whose qualities need none of those ‘for a diesel’ qualifi cations, although we’d go for the smoother-riding SE rather than the harshly sprung Sport sampled here. Confi gured like this, the 535d makes one of the most complete and satisfying diesel saloons in the world – albeit at a price.

The diesel that could beat an M5?

The E60-gen BMW M5, launched in 2005, was a phenomenal piece of kit, with its sensational V10 engine and brutal SMG paddle-shift ’box. On a track, there was little with four doors and a boot that could touch it, but on the road, in real-world conditions, it might just have got a bit of a scare from one of its own.

The 535d is today such a ubiquitous sight as to be almost anonymous but, in January 2005, this diesel saloon was in many ways the most discreetly significant arrival of the year. Packing a twin-turbo 3.0-litre straight six, it was truly the first oil-burner to unite the pleasures of petrol and diesel in a monstrously torquey yet still free-revving – and sweet-sounding – 272bhp gem of a power unit.

Even in the wet, it was a breeze to better BMW’s 0-60mph claims, and given a dry track, I’m certain it would have cracked the 6sec barrier. And the acceleration just kept on coming, only starting to tail off past 120mph. It was the quickest diesel Autocar had tested. Chuck in the fact that it returned a 27.7mpg average, giving it a real-world range of more than double the M5’s, and you can see where the argument might be won over which would win a cross-Continental dash.

I'm not sure who was more insane - Bangle for producing such hideous designs, or the bosses at BMW for paying him lots of money to do so.

It grows on you..

...I think.  It seemed a bit shocking when it first appeared but now I agree with Marc above, it looks good, especially in estate car form.  Is this because BMWs have got even worse looking as time wore on???

Maybe, but whilst it's down

Maybe, but whilst it's down to personal opinion, I think it's more to do with good design It may challenge at first, and it should, that's what grabs attention, it then ages very well.
typos1 23 July 2020

...I think.  It seemed a bit shocking when it first appeared but now I agree with Marc above, it looks good, especially in estate car form.  Is this because BMWs have got even worse looking as time wore on???

Deffo agree about the saloon being great looking sadly I dont about the estate it had horrid Merc style rear lights intead of rear lights the same style as the saloons. And I say that as someone who prefers estates.

Regardless of engine, still

Regardless of engine, still the best looking family saloon of the past 20 years.

I had the 530i Petrol,and while it may have been a wee bit slower, it was an M Sport so it handled just like was mentioned.