BACK TO ALL NEWS
Currently reading: Renault unveils retro 4L-based electric convertible
UP NEXT
2025 Volkswagen ID 1 is Spanish-built, £17,000 entry EV

Renault has revealed a retro-styled electric convertible based on its first front-wheel-drive family car, the 4L.

The one-off e-Plein Air (French for ‘fresh air’) was unveiled at the 10th annual 4L International, an event dedicated to the iconic Citroën 2CV rival, and is the result of a collaboration between Renault Classic, Renault Design and parts supplier Melun Rétro Passion.

The companies say the 4L was chosen as a basis for the project because it remains Renault’s most popular model, with more than 8 million units sold globally, and its contemporary rivals, including the BMC Mini, Volkswagen Beetle and Citroën Méhari, have all been electrified at some point.

Built over a period of just six months, the doorless drop-top e-Plein Air shares a 17bhp electric motor and 6.1kWh lithium ion battery with the Renault Twizy Urban 80 quadricycle. At 580kg, it weighs roughly 130kg more than the Twizy.

Performance details remain undisclosed but are predicted to nearly match those of the Twizy, which has a top speed of 50mph. Early test drives of the e-Plein Air have reached speeds of 53mph. 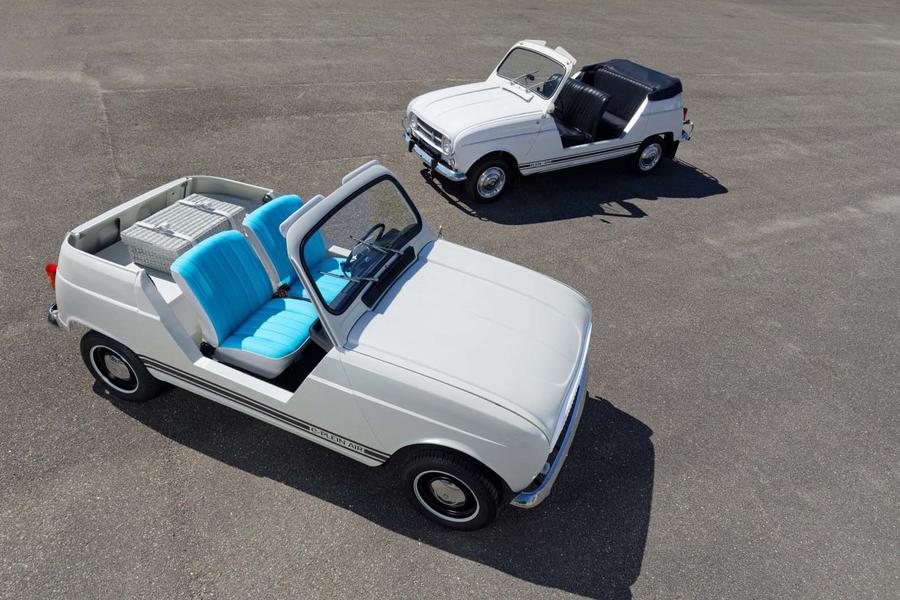 Styling changes over the original 4L include vivid blue seats, a blanked-off front grille, the addition of a bespoke luggage rack and the removal of the rear seats, presumably to make space for the drive unit.

The wheelbase has been shortened as a homage to the rugged, 4L-based JP4 off-roader of the 1980s, with larger wheels added for a beach buggy-style stance.

The e-Plein Air remains a concept for now, with Renault expressing no intent to bring it to production, although its creators say that they “will of course be attentive to the reactions of enthusiasts and potential customers”.

A convertible version of the 4L isn't a new concept: the original Plein Air was launched in 1968 as a rival to the beach-oriented, 2CV-based Méhari.

Originally developed with a four-wheel drive system to meet the needs of the French Army, the Plein Air concept was made front-wheel-drive-only for production. However, it was more expensive than the Mehari and axed in 1970 after just 563 examples had been sold.

The e-Plein Air is the latest in a flurry of electrified classic cars. UK-based firm Swindon Powertrain’s electric Mini is on sale now from £79,000, while Charge Automotive revealed its limited-run electric Ford Mustang at the recent Goodwood Festival of Speed.

Is the Renault 4 in fact better than the Citroën 2CV?​

Looks fun, but is it road legal?

Looks fun, but is it road legal?

Can you spot the seatbelts? Did you read the article?.

Try again.  It's a little play on the expression en plein air, literally meaning outdoors, or outside.  Here they've tweked it slightly.