Renault Sport has been putting distinctive cars on our roads for 20 years. We put three of its potentially best efforts to the test
Open gallery
Close

So often when older cars gather together for a drive like this, parting company at the end of the day is tinged with sadness. Not just because a good day driving borrowed cars has come to an end but also because the cars you’ve left behind have been replaced by a gnawing feeling that won’t go away.

The truth is that for all their technical excellence, modern cars are often just not as much fun to drive as their forebears.

How could they be? Customers have spoken and they’ve come down so hard on the side of the mass augmentation of safety systems and bottom-softening comfort features that a generational shift towards cars that happily trade driving pleasure for ease of use has emerged.

Yet through it all, two small voices have begged to differ. Two voices have said that whatever kind of car everyone else produces, even if that includes the same company whose badges we bear, we will be different. We will never lose our edge, never betray the values that made us great in the first place. We will defy convention, and while others are content to weigh anchor and go with the flow, we will remain chained to the core mission of making cars for those who simply love to drive. One of those voices belongs to Porsche, or, more specifically, the motorsport department that makes the 911 GT3s and Cayman GT4. The other voice is that of Renault Sport.

They may occupy very different slots in the market, but the philosophy is the same. So as hot Porsches of all eras make frequent appearances in the motoring press, we thought the unveiling of the extreme Clio RS16 made this a good time to celebrate the best – or at least, what we hoped to be the greatest – cars from Renault Sport.

The question is where to start. As an entity, Renault Sport has been around since the mid-1970s and sporting Renaults for even longer. It has mastered motor racing all the way from rallying and hillclimbing to touring cars and Formula 1, winning Le Mans along the way. But we’re going to start with the Spider, not just because it went into production a nice, neat 20 years ago, but also because it was the first road car to bear Renault Sport badging. At the other end of the time frame comes last year’s Mégane 275 Trophy-R. And in the middle? We find the Clio 182 Trophy, chosen because, well, we could. 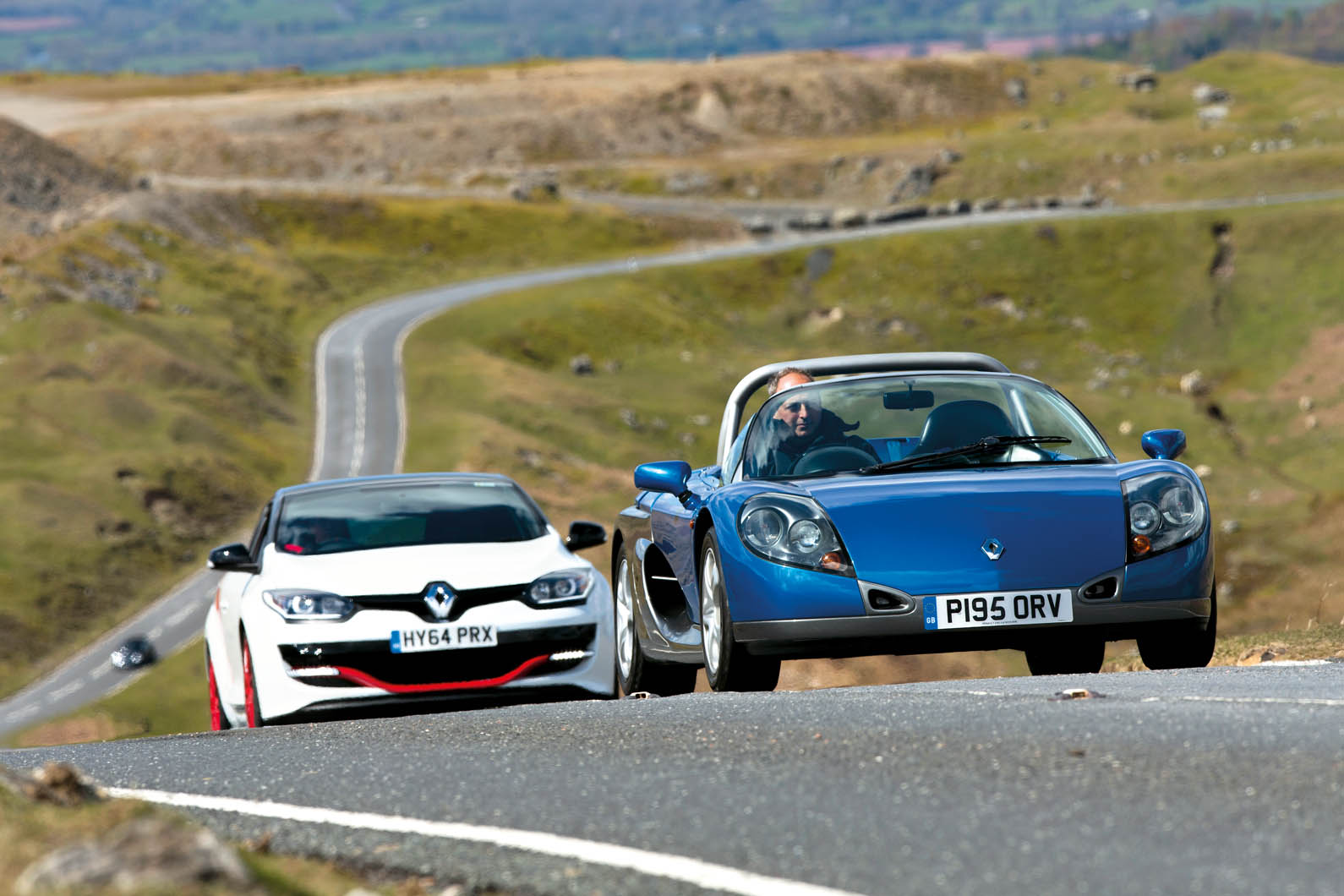 As a statement of intent for a new generation of Renault Sport-branded cars, the Spider could hardly have made it clearer. It looks like a giant insect from some dystopian future, a low-slung slice of post-apocalyptic automotive art, all curvy shapes and scissor doors and sod the practicality. There were road-going ones with and without windscreens and others in a one-make race series contested by the likes of Jason Plato and Andy Priaulx. It has been a while since I last drove one and it’s a joy to see it waiting on a Welsh hillside for me. I remember driving a Caterham all night to reach the Spider’s launch in the south of France and steaming straight into a twin test. I try not to recall just how badly the Renault lost. Besides, we’re not here for an on-limit analysis of ultimate abilities. We’re here to drive great cars on great roads, and what could be better for that?

As it happens, quite a lot. I’ve never figured out why some old cars are so much better than you remembered and others even worse, but I think it’s related to the fact that if the car was good when new, its talents become magnified over time, and if it wasn’t, you can say the same for its faults.

Sadly, the Spider falls into the demerits camp. You sit too high in the car, which is weird, seeing how low slung it is. The instruments are hard to see, the steering is too heavy and the driving position distinctly sub-optimal. The 2.0-litre engine has 148bhp but, slotted into a car weighing nearly a tonne before things like an optional windscreen are fitted, it doesn’t even provide stirring performance. It still corners flat and engagingly fast, but there’s not enough chassis feel, the gearshift is too clonky and the brakes too wooden in feel to make you want to really push it. And if you’re not going to drive it that way, you have to ask what you’re even doing in the car. The point is you need a bloody good reason to put up with all the privations such cars impose, and the sad truth is that the Spider is unable to provide them.

So we move on to the Clio 182 Trophy, a car that, to many, is the ultimate version of the purest hot Clio. Subsequent Renault Sport Clios based on third-generation platforms were heavier, more comfortable and less focused, even before gaining the turbocharger, paddle shifts and electric power steering of the current generation, but these second generation cars were near-perfect. 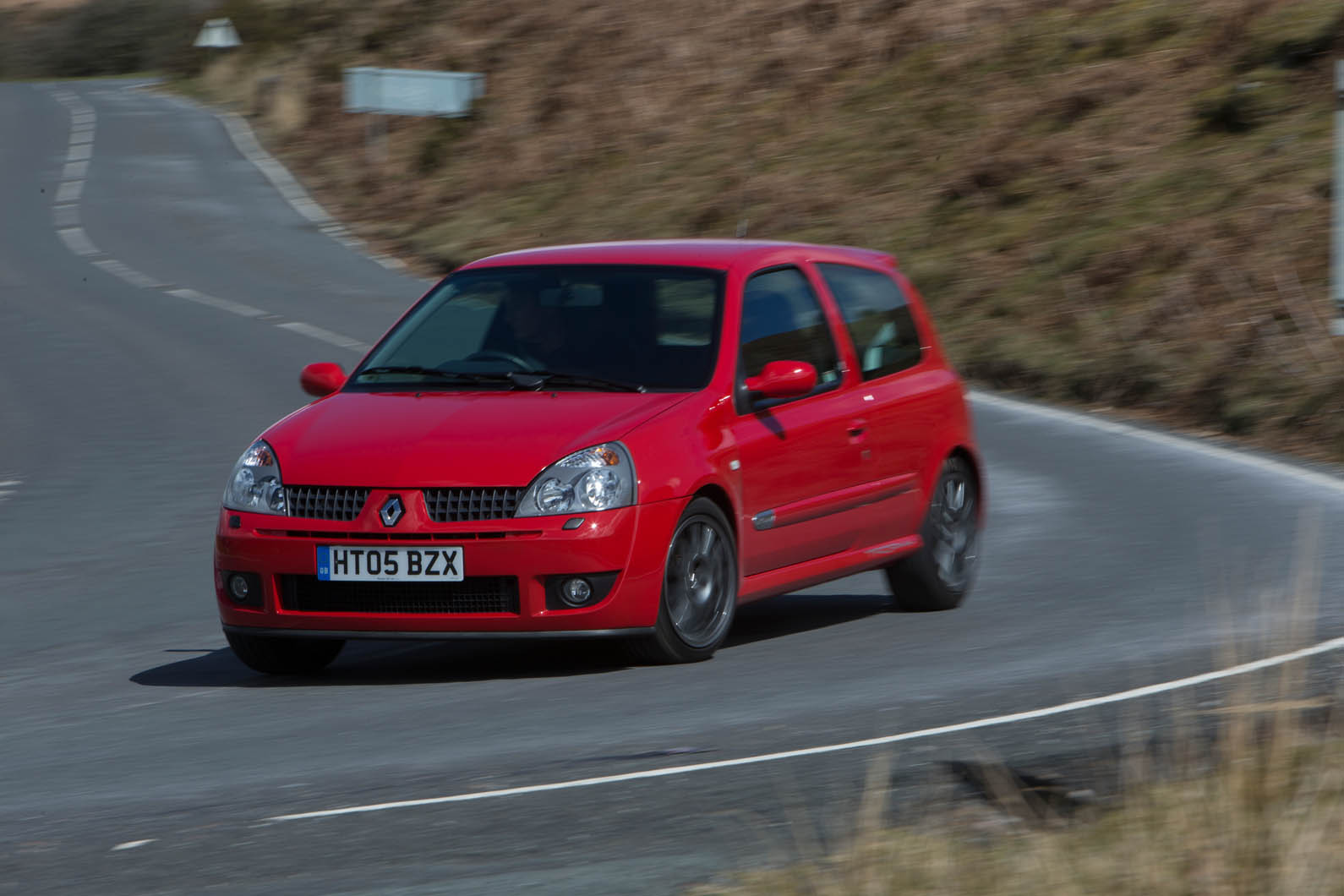 The 182, you may recall, was the first significant upgrade to the original hot Renault Sport Clio (as opposed to the Clio 16v and Williams of the pre-Renault Sport era). Introduced in 2004 to replace the still-excellent Clio 172, it received a 10bhp power hike and twin exhausts and could be had in Cup specification with lowered suspension and a distinctive bodykit. But Renault also produced 500 Trophy-spec cars especially for the UK, which was far and away its best market (and 25 for Switzerland). These featured even more hardcore suspension with, notably, super-trick Sachs dampers with competition-inspired remote reservoirs. They were all red and all carried Trophy logos. At the time, it was our favourite hot hatch on sale.

Unlike the Spider, time has not wearied it. At all. Actually, the car is quite shocking: shockingly capable and shockingly good fun. If you want to feel young again, forget a Harley Street facelift; this Trophy is far more effective, it’s probably cheaper and it will get people looking at you for all the right reasons.

First, you notice the engine and the way that, above 4800rpm, its cam profiles change its character completely, flinging you up to 7000rpm and beyond. Then you notice how crisp the gearchange is and, finally, the class of the chassis. This is a car that begs to be lobbed into a corner on a trailing throttle and steered through by foot alone. For a humble hatch, its agility is mesmeric, its feel other-worldly. Standard Cup cars are nearly as good but lack the cachet (and accompanying price).

The Mégane Trophy-R, however, is on another level. While the Clio is a toy, the Mégane is a pure weapon. 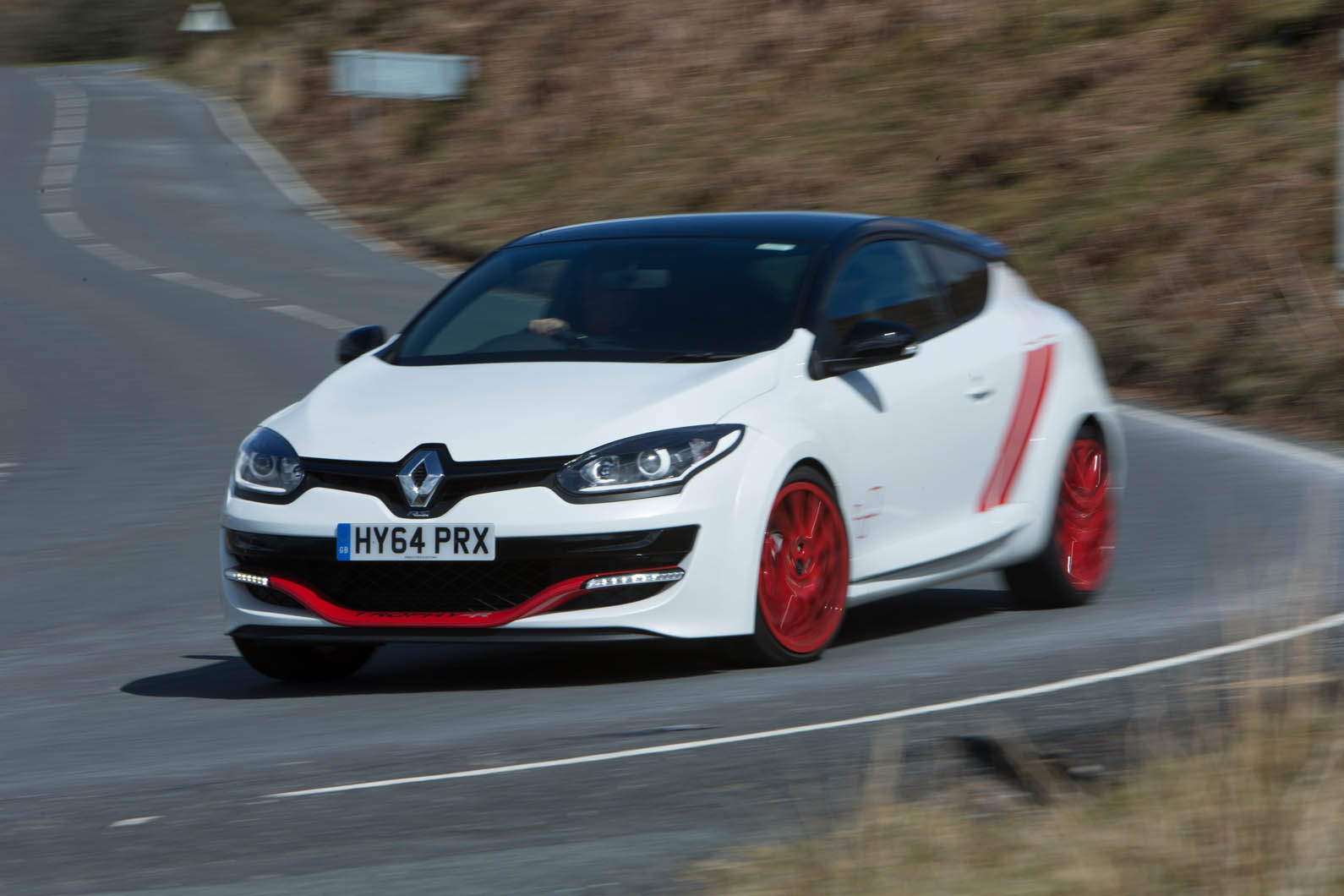 Anyone with common sense would avoid its immense additional cost and decimated practicality and stick to the 275 Cup-S, which at least has seats in the back. But if you want what, I’d argue, is the maddest genuine hot hatch yet sold – mad enough to make a Volkswagen Golf R look like a member of the pipe and slippers brigade – the Trophy-R is it. You can spend hours poring over its specification, including composite front springs, fully adjustable suspension with Öhlins dampers, its limited-slip differential, titanium Akrapovic exhaust and the absence inside of anything you might routinely categorise as ‘equipment’, but you can get a far better sense of what this all means within your first minute on the road.

No question, there are bona fide supercars that would not stay with this, its grip, compact dimensions and lizard-like agility making up in the real world whatever shortfall having ‘only’ 271bhp might bring. You’d need a truckload of amphetamines to carry more speed than this, a cosmetic surgeon of no repute to put a bigger smile on your face. Blasting up through the gears and hearing neat fuel detonate in that exhaust between every shift is fun in itself, but the way the dampers provide true track-car body control with still acceptable ride quality is what distinguishes this Mégane from any front-drive car wearing a numberplate I’ve driven. Given how humble its underpinnings are, including a torsion beam rear axle, the car is an engineering miracle.

This story was never meant to be the history of Renault Sport. There are plenty of others to consider, too. Instead, think of these three as snapshots, designed to show the scope of Renault Sport’s ambitions these past 20 years, from a purpose-built sportster, past an affordable, accessible pocket rocket, to probably the most focused hatch of all. I have to be honest and say I was disappointed by the Spider, but the Clio and Mégane were wondrous. It seems silly to select a winner between cars separated so much by time, concept and price, but if it is a winner you must have, the Mégane it must be. Why? Because it is indeed true that things ain’t what they used to be. In the world of Renault Sport, if not elsewhere, they’ve actually got better. Long may it stay that way.

I had 98 Laguna RTI 16v, yes I know it wasn't a Renault sport but the ride/ handling mix was perfect. Went well enough but had a drink problem (22mpg). Loved but the fuel economy, & spending more time fixing issues rather than driving it got too annoying. After a few other dalliance's with French car's and similar issues (mainly electronics) I won't have another, no matter how good they are. No I don't have German stuff either.
stumpys182 11 June 2016

Had one new back in 2004 and I can honestly say, without any hesitation, that it was THE most entertaining car I've ever owned....EVER! Like it was made from the outset to be ragged, late-braked and steered so hard that it would happily cock a rear wheel with all the deftness of Rudolf Nuryev in tights!
They really don't make them like this any more.....mores the pity!