BACK TO ALL NEWS
Currently reading: Rapid Intervention Vehicle unveiled as military jeep
UP NEXT
BMW opens door to M1-inspired electric supercar

Developed by British firm Horiba-MIRA, the RIV can sprint from 0-62mph in 10.5sec with a top speed of 100mph
Open gallery
Close

A military jeep that can do 100mph on desert sand and out-accelerate many family cars has been built by a UK test facility that provides development and consultancy services to vehicle manufacturers.

Called the RIV, which stands for Rapid Intervention Vehicle, it is the work of Horiba-MIRA. Without being based on any pre-existing vehicle, it took the Warwickshire-based company just 12 months to design and build it from scratch.

The RIV was commissioned by NIMR, a military vehicle manufacturer based in the United Arab Emirates, to a challenging brief: to design and build a high-performance vehicle for use in the desert by UAE special forces, for rapid insertion into dangerous areas via Chinook helicopter.

The RIV can carry four heavily armed soldiers each weighing around 120kg. Much of the body and structure is fabricated steel, but the wings and bonnet are composite. It has a spaceframe chassis, short entry and departure angles for 36-degree dune gradients and a flat floor to minimise the risk of becoming grounded on dunes. The independent, variable-height, long-travel suspension has a maximum 300mm ground clearance, but can be lowered to 120mm to make it easier to load the vehicle onto a Chinook. The suspension features Horstman hydrostruts. They’re filled with fluid and nitrogen which become firmer as they get hotter, in the process alerting the driver to potential overheating issues. To tune its wheels for different surface conditions the RIV has an onboard tyre inflation system. 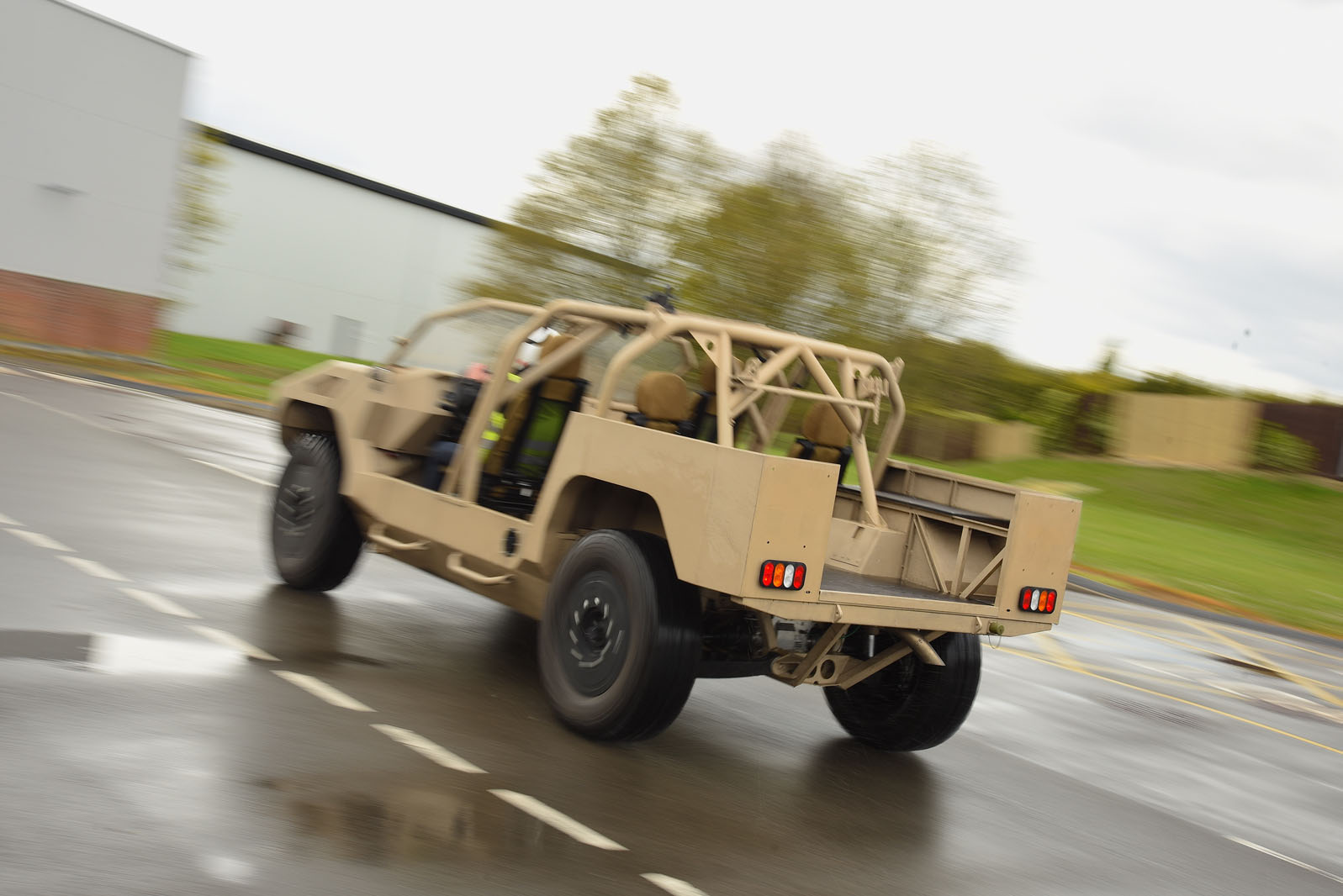 Power is provided by an uprated version of the 3.0-litre V6 diesel found in the Maserati Ghibli. It produces 296bhp and 443lb ft, and drives the RIV’s four wheels via a ZF eightspeed automatic gearbox, Torsen T2R torque-sensing differentials and a transfer ’box with a lockable diff. All can withstand desert temperatures of up to 55deg C.

Despite weighing 4000kg the RIV can do 0-62mph in 10.5sec on the way to a maximum speed of 100mph, with or without windscreen. As it accelerates, the RIV’s aerodynamically styled body guides sand over the top of the vehicle to avoid clogging the interior. Winglets at the front reduce drag around the wheels. At 62mph, it will cover about 600 miles on a tank of fuel.

“It’s the fastest vehicle across the desert,” said Jim Hopton, the project’s chief engineer. “Its secret is getting into and out of combat quickly, reliably and safely, going where few other vehicles can, so avoiding the Improvised Exposive Devices that cripple those using traditional routes.”

Horiba-Mira has built three development vehicles, two of which are currently undergoing evaluation by the UAE military. 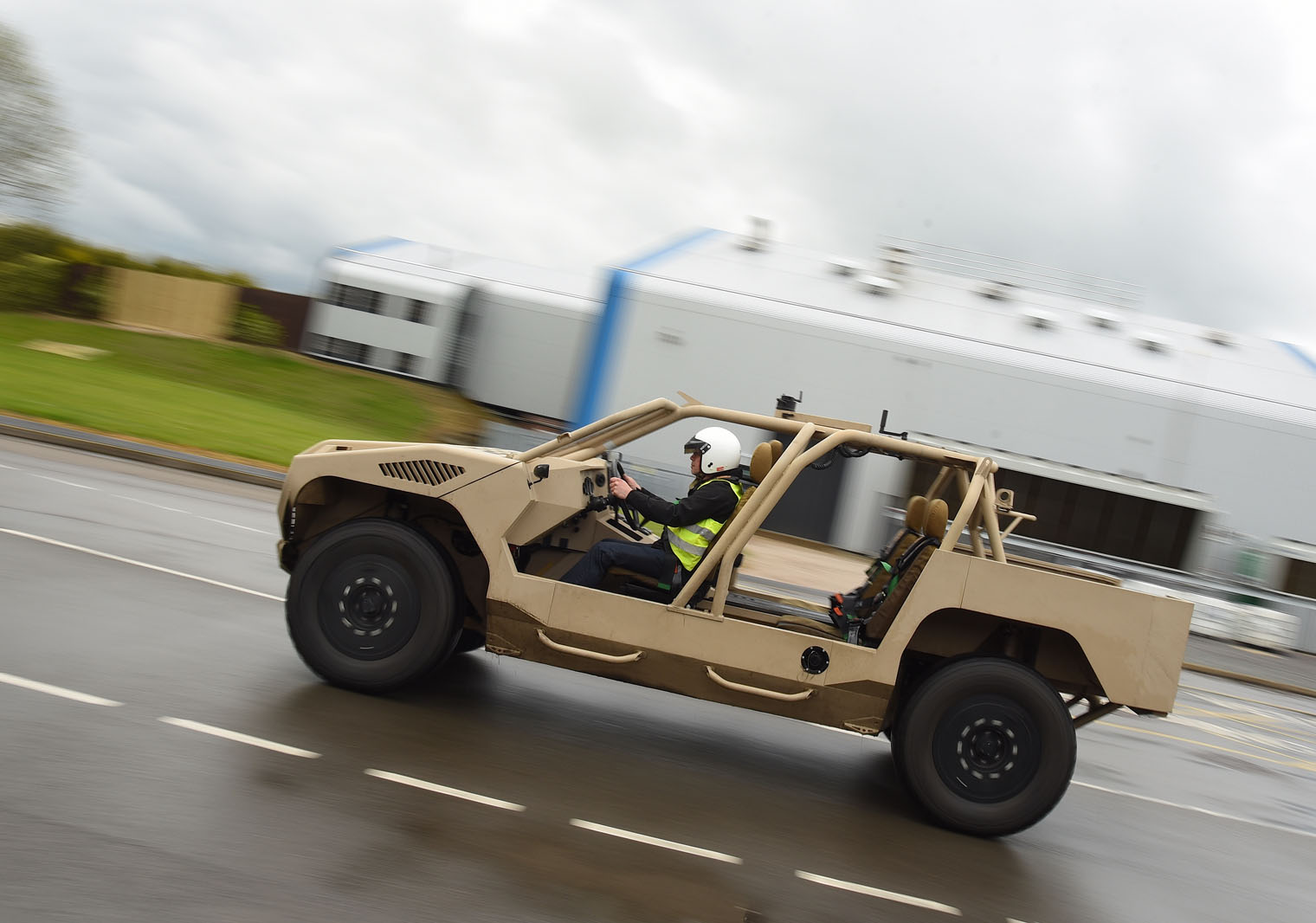 “A lesser vehicle lasts about six months in the hands of the military before it’s wrecked,” said Hopton. “Not one frame has broken during testing and we believe an RIV could last at least three years.”

To climb aboard the RIV you grab the rollcage, place a foot on the sidestep and swing up and into the deep bucket seat, before clipping yourself into the racing harness.

The functional design extends to the cockpit which, despite a wealth of dials and buttons and a large centre screen, wouldn’t impress EuroNCAP due to its unyielding bare metal construction. Still, at least the steering wheel adjusts for rake.

The dashboard is home to fuel, speed, revcounter and engine temperature gauges. At the top of the centre console is a multi-function screen showing the status of the RIV’s power distribution management system. Below that are the controls for the tyre inflation system and the RIV’s ride height. To their left is the stubby ZF shift lever. 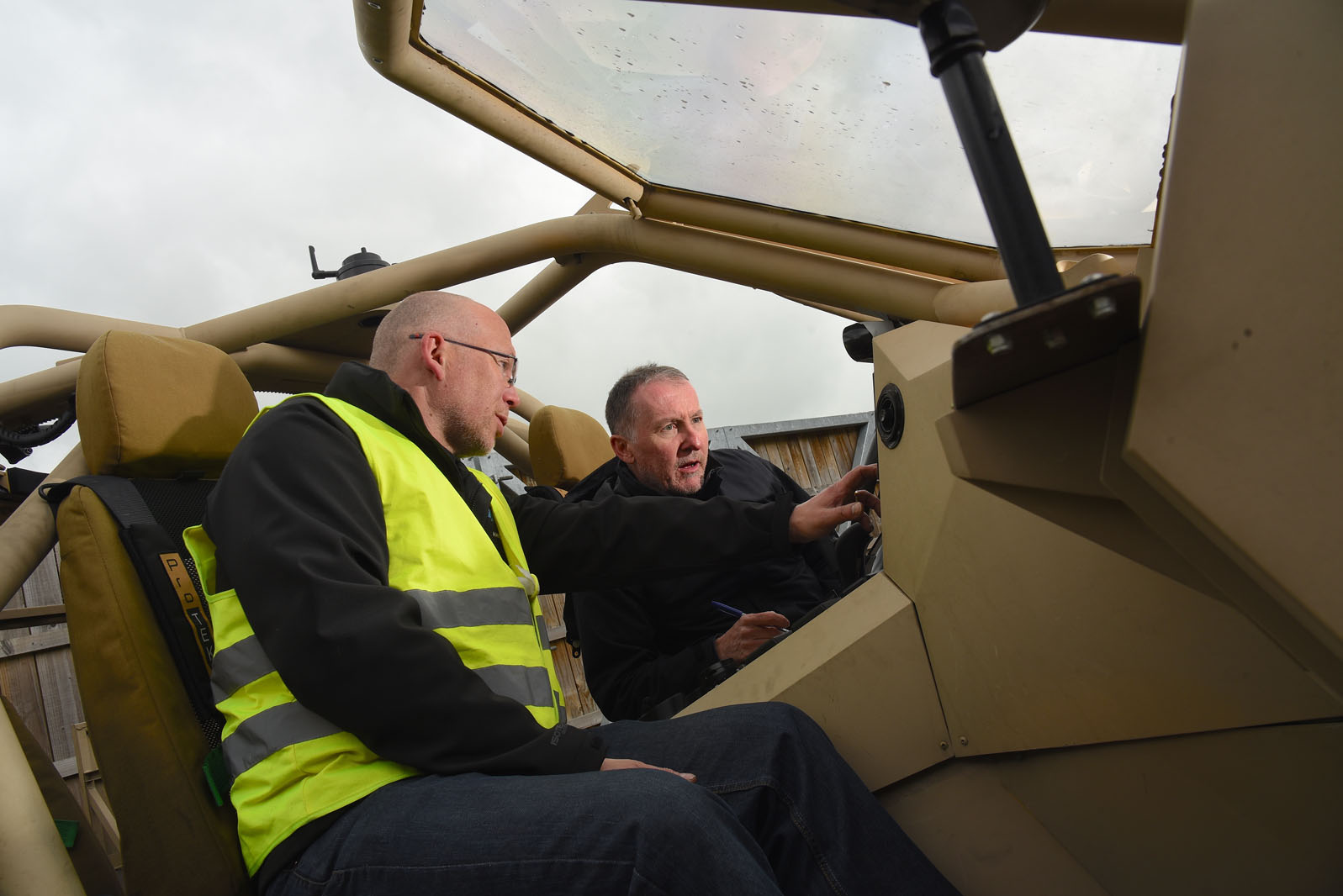 Turn the ignition key and press the Power button and the V6 engine settles to a diesely rumble, but it’s the steady hiss of compressed air produced by the turbocharger and escaping from the straight-through exhaust that is most noticeable at tickover.

Engage Drive (the lever moves smoothly and precisely) and pull away, and the ZF gearbox changes gear quickly and seamlessly as the revs build. This blend of ultrasophisticated mechanicals and battle-ready hardware is the most impressive thing about the RIV.

The jeep gathers speed remarkably quickly but without drama. At around 40mph, its ride on MIRA’s sinewy handling track is firm but not bouncy, ensuring the RIV is stable and secure in corners. However, while the Mercedes-sourced steering system is light, it lacks feel. A hefty shove on the brakes brings the 4000kg RIV up short without fuss.

Autocar wasn’t permitted to drive the RIV on MIRA’s outer test circuit, but with the company’s test driver at the wheel it certainly achieved its claimed 0-62mph sprint time of 10.5 seconds, on the way to an indicated and unflappable 100mph.

One would have to assume that the vehicle meets its design brief. Reading the article, the RIV does sound a little like a stripped down Bowler.
Mclaren1968 30 May 2017

Why all these fuss about doors for ? Surely the point why it hasn't got doors is simple ......Rapid intervention , the clue is in the title ......
Special forces don't wait for the driver to plip the doors unlocked / opened do they ?
D'oh ....forgot bullets can't go though doors can they ...
View all comments (11)