BACK TO ALL NEWS
Currently reading: Nissan Pulsar to cost from £15,995
UP NEXT
Omissions scandal: the cars we think should exist

Nissan has the Ford Focus and Volkswagen Golf in its sights with the new Pulsar hatchback, which goes on sale later this month
Share
Open gallery
Close
Share story

Nissan's Pulsar will be priced from £15,995 when it goes on sale later this month. The new model, which marks a return for Nissan to the competitive hatchback segment, is intended to rival the likes of the Volkswagen Golf and Ford Focus.

The Pulsar will be produced at Nissan’s plant in Barcelona. It will be the first time that Nissan has been in the segment since the Almera went off sale in 2006, to be indirectly replaced by the Qashqai.

Nissan says the C-segment hatchback has been “designed to meet the specific demands of European car buyers” and will feature “the same high-quality, high-innovation approach that has come to typify Nissan models”.

The Pulsar name first appeared in 1978 and was widely used for models in Asian and Australasian markets over the course of the past four decades, returning full-time to the Australian market last year. It also appeared in certain European markets in the early 1990s on the N14 model.

Although the new model’s design is related to that of the recent Qashqai and X-Trail SUVs and sits in the same class as them, its underpinnings come from elsewhere in the Nissan family.

The five-seat, 4385mm-long Pulsar hatchback sits on a lengthened version of the Juke’s platform. The Pulsar is 115mm longer than a five-door Golf, 69mm of the extra length coming in the wheelbase. Nissan claims best-in-class rear legroom and shoulder room compared with its rivals.

The engine range will include three turbocharged units — two petrols and one diesel. From launch, there will be a base 113bhp 1.2 DIG-T petrol and a 108bhp 1.5 dCi diesel with CO2 emissions estimated to be 95g/km. A range-topping 187bhp 1.6-litre petrol unit will join the line-up next year. A CVT automatic will be optional alongside a six-speed manual transmission.

Order books for the Pulsar open on 8 July, with first deliveries expected in September. Prices start from £15,995 for an entry-level 1.2-litre model in Visia trim, and rise to £21,945 for a top-spec diesel version in Tekna specification. 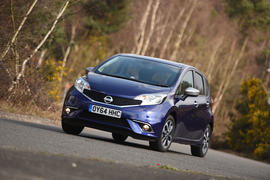 The second-generation Nissan Note is a spacious Fiesta alternative, despite dynamic dullness compared to the Ford

20 May 2014
Looks OK considering this segment is traditionally very reserved. Will be interesting to see how this model goes. Nissan traditionally traded on its core values of durability and reliability - still does in most places. The market (specifically the European market) changed and consumers started to view even everyday cars as fashionable items rather than practical devices (VW cleverly picked up on this - arguably the Focus has been a better car that the Golf on average since its introduction, but people still buy the volkswagen product because of the badge...bonkers!). Nissan was slow to realise this as were most Japanese producers, their products although of excellent engineering integrity, were shunned in favour of more stylish but arguably less reliable European offerings. Recognising a rather fickle buying public, Nissan knew no matter how good its products, the European market would not buy its dour model range.....cue Qashqai and Juke. Effectively continue to make soundly engineered products but style them differently and create segment changing architecture. Nissan appear to think the European buying public now value their brand again so are reverting back to more 'normal' product. With tried and proven powertrains and platforms and superior reliability, Nissan's timing might be spot on!

20 May 2014
[quote=geed] VW cleverly picked up on this - arguably the Focus has been a better car that the Golf on average since its introduction, but people still buy the volkswagen product because of the badge...bonkers!). Nquote]
That is a matter of conjecture of course. Personally, I would rather have solidity and design dependability over 'flash in the pan' design with a cheap interior. I would argue the only advantage the current Focus has over the Gold is better steering... I am clearly bonkers!

There is nothing that would make it stand out.....

20 May 2014
in its segment, but I'm sure it will be a whole lot better than Nissan's previous attempt, the Almera. That was a really dull white good type of car. "Good luck with this one Nissan".

Give it some pulsating engines

20 May 2014
Following the pulsating success of Qashqai and Juke, Nissan seems to be brimming full of confidence to take on this segment's big bad boys with the Pulsar. Give it some pulsating engines, make it sizzle. Unlike many here, I love competition. Always good for the buyer. Always! Just trust me on this one.

21 May 2014
bang on fadyady....competition is good. Keep bying those German products on marketing rather than merit and they become complacent - look at VW's fall from reliability grace.

20 May 2014
Doesn't set the Pulsar racing, raise my Pulsar rate etc etc. But maybe a few people who've gone shopping for a Juke or Qashqai will think "or shall we buy this generic but sensible offering instead?" Good luck with that Nissan!

20 May 2014
Is it me, or does this just look like a replacement for the Almera or Tiida? I really thought Nissan was going to pull something special out the bag. Since the demise of the Almera they have had nothing to offer in this competitive segment, instead going down a different route with the Qashqai, which has certainly paid off. Nissan has made a great success out of abandoning the traditional segments, so I was surprised to hear they were going to re-enter this sector of the market. However, I feel this is a missed opportunity as they should have been a lot braver and offered styling with the wow factor to shake things up just like they did with the Qashqai and Juke! What did they have to lose??

erly5 wrote:Is it me, or does

Is it me, or does this just look like a replacement for the Almera or Tiida?

Erm, that is exactly what it is! Not sure why people expect something special in this segment from them. That was what the Qashqai was all about. This is just giving them some representation in a class that is still a large market. It hits the nail exactly on the head in terms of styling (mundane) for it's intended target audience

superstevie, what I meant was.....

21 May 2014
.....because the Almera and Tiida were such nondescript designs in such a competitive market, the Pulsar looks exactly what you would expect their replacement to look like. After taking a risk with the design of the Juke, and seeing how successful that has been, I just expected more from Nissan.

20 May 2014
About three inches longer in the wheelbase than the Golf VII and five inches or so overall can be handy but how many road tests will slate it for being "unwieldy" versus said benchmark Golf as a result? Doesn't look exciting from the outside and certainly nothing that seems likely to tempt someone out of a Golf or Focus unless the economy of scale with the platform sharing means it is a good two-grand cheaper across the board with similar quality.. Perhaps they will do that by offering an OAP discount?