BACK TO ALL NEWS
Currently reading: Next Mazda MX-5 to maintain driver focus with petrol power
UP NEXT
Hope for Bloodhound LSR project as sponsor talks start again

Next Mazda MX-5 to maintain driver focus with petrol power

NE-generation roadster, due 2024, to be designed around innovative Skyactiv-X engine
Open gallery
Close

Mazda’s commitment to internal combustion will extend to the next-generation Mazda MX-5, which is set to receive the Japanese manufacturer’s newest and most advanced petrol-engine technology rather than a plug-in hybrid or battery-electric powertrain.

Last year, the firm launched its first BEV, the Mazda X-30 crossover, but just a year before that ushered in its innovative Skyactiv-X petrol engine technology, which uses spark-controlled compression ignition (SPCCI) to improve efficiency and performance.

This could enable some petrol-powered Mazdas to remain on sale as their respective rivals go electric. The MX-5 in particular is a likely candidate, given that its relatively low sales volumes have a negligible impact on Mazda’s European fleet- average CO2 emissions.

The manufacturer has previously confirmed that a Skyactiv-X engine will be used only in all-new models that have been designed around it and its associated mild-hybrid hardware.

The first cars to gain a Skyactiv-X engine were the3 family hatchback and its CX-30 sibling, and Mazda has previewed a new straight six that could appear in the next- generation 6 executive car.

Skyactiv-X technology is now offered in various European-market models without a turbocharger (the 3 is available in the US with a 2.5-litre turbo engine), making it highly likely that the MX-5 can stay trueto its naturally aspirated roots in its fifth generation. 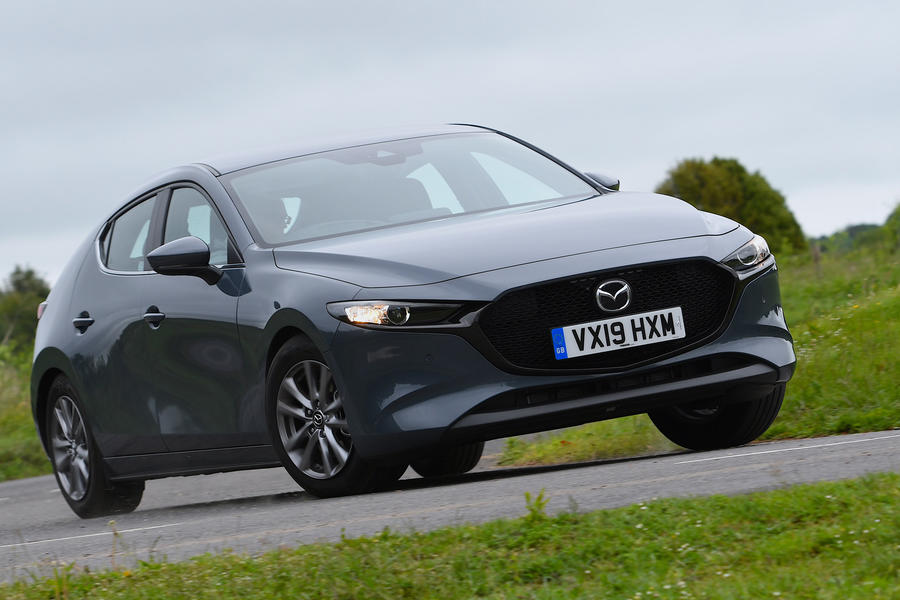 A small supercharger does feature as part of a Skyactiv-X engine, but only as a means of pressurising the air inside when it’s running on spark- controlled ignition (in so doing avoiding the accelerative lag caused by a turbocharger).

Upgrading to the latest iteration of Mazda’s petrol-burning technology could make the next-generation MX-5 a substantially more potent proposition, as the firm claims that the 2.0-litre four-cylinder Skyactiv-X engine produces some 30% more torque than the same-sized Skyactiv-G unit (used by the current, top-rung MX-5). This would take output from 151lb ft to nearer 200lb ft and most likely bring the 0-62mph time below 6.0sec.

The most recent version of the 3 packs only a touch more power with this unit (184bhp, compared with the 2.0-litre MX-5’s 181bhp), but a low kerb weight and usable performance have always been higher priorities than outright power for Mazda’s roadster.

Notably, Mazda has yet to create a Skyactiv-X engine with a capacity lower than 2.0 litres, raising questions over the future of the entry-level 1.5-litre MX-5.

Should the model be re-engineered from the ground up to accommodate Skyactiv-X tech, it is doubtful that Mazda would continue to offer any version of the Skyactiv-G engine. As such, it is likely that the next MX-5 will be offered with one powerplant in different states of tune.

A manual gearbox will no doubt remain an option, however, in line with the car’s enthusiast focus. 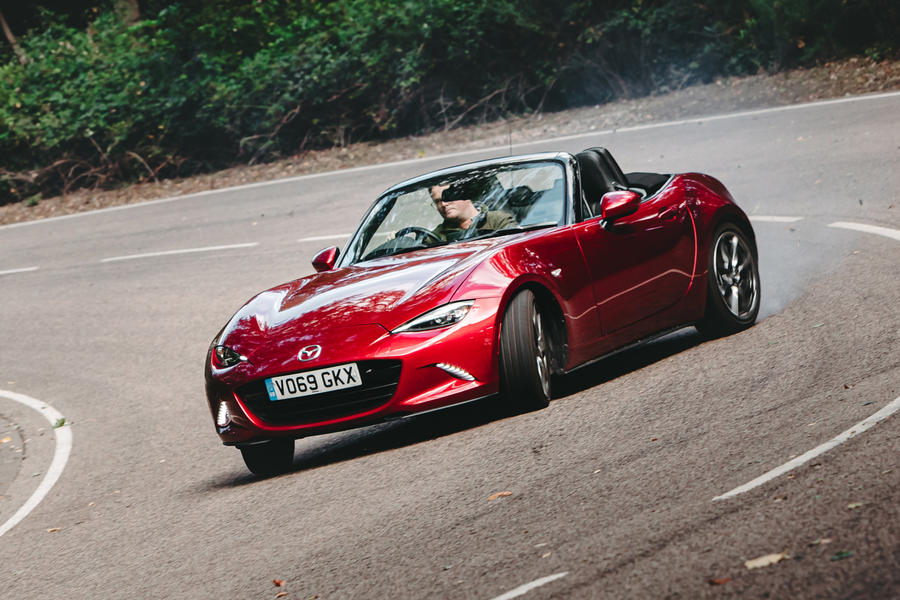 Although new, cleaner fuel-burning technology could extend the pure-petrol MX-5’s lifespan, the latest Skyactiv-X engines are equipped with a belt-driven mild-hybrid system, which slightly reduces CO2 emissions without incurring the weight penalty of a more cumbersome electric motor.

Mazda design boss Ikuo Maeda has previously outlined to Autocar the dilemma the firm faces in future-proofing the MX-5: “We want to look at the best powertrain to keep the vehicle lightweight, but because of the diversifying requirements and preference, we need to explore various options.”

Crucially, he added, the next MX-5 must be a car that “people can own without worrying that they aren’t being eco-friendly”.

The packaging constraints and lightweight focus of a diminutive sports car such as the MX-5 make extensive electrification largely unviable with the technology that’s on offer today.

Even according to Mazda’s philosophy of using exclusively small batteries for EVs in order to minimise emissions from production, an electric MX-5 adopting today’s battery-cell technology would still be a much heavier car than the current model. For context, the MX-30 employs a relatively tiny 35.5kWh battery pack yet still weighs some 500kg more than the current MX-5 convertible.

Outside the engine bay, the MX-5 is tipped to draw on the “less is more” design language previewed by Mazda’s striking Vision Coupé concept, which was revealed two years after today’s MX-5 was launched and has since influenced the looks of the 3, CX-30 and MX-30.

Therefore angular LED headlights and a new-shape front grille are on the cards, although Mazda will no doubt steer away from its overtly aggressive design cues so as not to confuse the MX-5’s accessible positioning.

The overhaul will be extended to the cabin, where the roadster will be brought into line with its newer contemporaries, benefiting from Mazda’s visibly more upmarket new-age dashboard design, complete with updated infotainment, digital dials and sleeker switchgear.

Official details will be released closer to the model’s unveiling. Mazda has given no official indication of a launch date. However, based on the lengthy life cycles of previous MX-5s, it can be expected to go on sale in 2024. 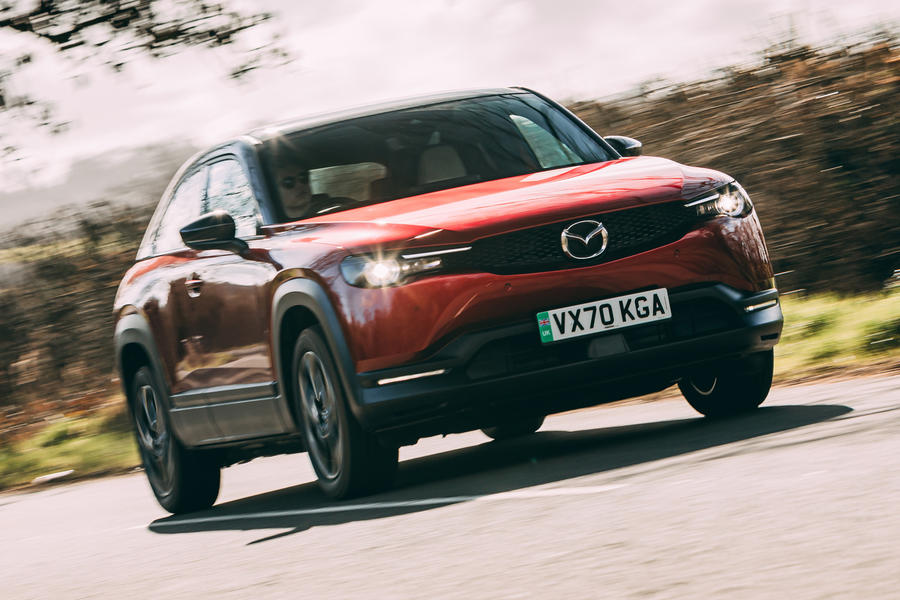 The MX-30 has one of the shortest ranges of any mainstream BEV, but Mazda has vowed to improve usability with the addition of an optional petrol engine to serve as a range extender, as BMW used to do with the i3.

Most notably, the petrol element of the MX-30 REx’s drivetrain will bring back rotary engine technology, which hasn’t been used by any production car since Mazda’s own RX-8 sports coupé, which bowed out in 2012.

Mazda will introduce the new petrol-electric drivetrain early next year, and it will technically be the first plug-in hybrid offered by the brand in Europe.

A more conventional petrol-engined PHEV powertrain will be offered by the all-new CX-60 crossover and CX-80 seven-seat SUV, which have been confirmed by Mazda for launch in Europe by 2024. This is likely to be based on the system used in strategic partner Toyota’s RAV4 PHEV.

The CX-60 and CX-80 will be among the first European-market Mazdas to offer the new Skyactiv-X petrol straight six (as well as a Skyactiv-D diesel).

"maintain driver focus with petrol power"  Speaks more about Autocar writers denial of an EV future. And that EV's cant be driver focused - of course they can. Once myths about weight, charging, grid and child mining are dismissed. The only bastion of foot dragging and probably climate deniers is the lack of manly 'brum-brum' noises. And for testers having to drop earned skills in matching peaky ICE engines to gears.

Driver focus is about handling. MX5 is about handling. An EV MX5 with same or lower weight would be brilliant. With a range of 120  miles between fast charges a lower weight is entirely feasible  - check out all the Ferrari, Lotus 'Elon' and 911 conversions, lighter, much faster, better balanced - all without 'look at me' loud exhausts.

"maintain driver focus with petrol power"  Speaks more about Autocar writers denial of an EV future. And that EV's cant be driver focused - of course they can. Once myths about weight, charging, grid and child mining are dismissed. The only bastion of foot dragging and probably climate deniers is the lack of manly 'brum-brum' noises. And for testers having to drop earned skills in matching peaky ICE engines to gears.

Driver focus is about handling. MX5 is about handling. An EV MX5 with same or lower weight would be brilliant. With a range of 120  miles between fast charges a lower weight is entirely feasible  - check out all the Ferrari, Lotus 'Elon' and 911 conversions, lighter, much faster, better balanced - all without 'look at me' loud exhausts.

I could not have said it any better. MX5 ICE car is a lost opportunity for Mazda to offer a BEV Electric hot sports car and increase revenue and stature of the brand name. Now, they will be stuck watching the Chinese brands come out with a MX5 BEV clone. Mazda get off the fence and release credible BEVs now.

Crazy.  They need to go EV asap or they are just going to lose sales.  This is going to be a Kodak or Nokia moment for Mazda if they don't change ther ways.  Porsche is going electric with the next Boxster and Cayman and that is the right decision.

I am delighted to hear the MX5 will survive at least until the ICE ban in the UK. I just hope they can afford to sell them here with the crazy average CO2 numbers getting tougher over the years. I hope they make it slightly bigger though, its just a bit too small for me to fit in comfortably.

As for making it EV, why give up all your sales in the rest of the world to pick up a few in Europe. Going EV is bound to add to its cost, which is surely one of the real plus points of the car. As for a comparison with Lotus and Alpine (where the sales are mainly in Europe) it will remain half the cost of them once electrified.