BACK TO ALL NEWS
Currently reading: New Vauxhall Corsa leaks online ahead of imminent debut
UP NEXT
UK EV charging network to improve after "horrible" summer

Vauxhall's best-seller will finally enter its next generation this year; it will be available in petrol, diesel and electric form
Open gallery
Close

Vauxhall is getting ready for one of its biggest launches in years, the all-new Comment: PSA plans for a better Vauxhall Corsa, but the unveiling appears to have been spoiled in advance.

The fifth-generation Ford Fiesta rival isn't due to be officially revealed for a couple of weeks, but what look to be official press images have reportedly been leaked online by a French automotive. The front end takes several cues from the Vauxhall Grandland X SUV, while the rear is clearly related to the Vauxhall Astra. 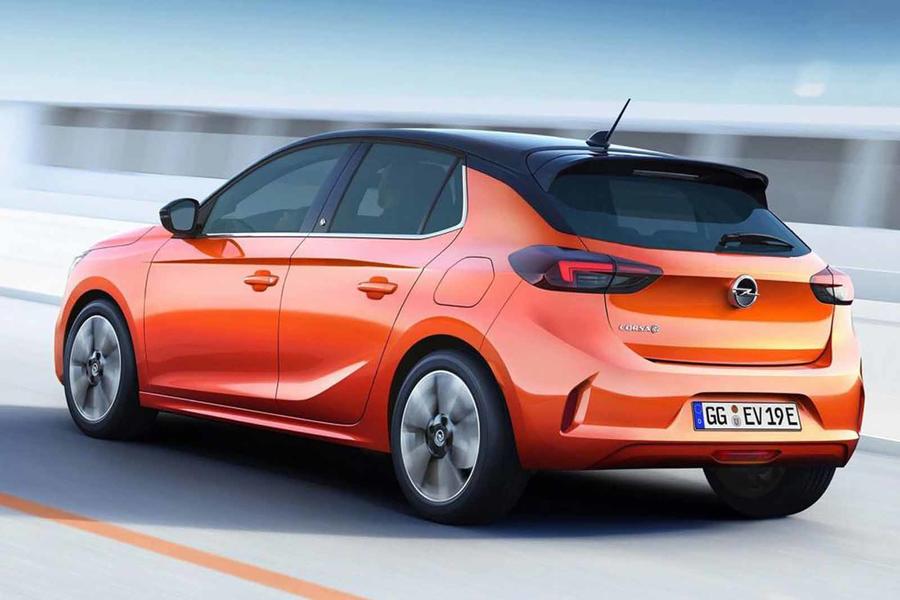 The shots are of the electric variant, which was expected to be revealed before the petrol and diesel variants. After an official launch next month, sales of the new Corsa in all three variations are expected to begin by the autumn.

Autocar understands that the EV will be sold as the Vauxhall Corsa-E in the UK, but the images appear to show that the Opel version sold elsewhere will be named the Corsae.

Camouflaged prototypes were previously shown being subjected to temperatures of -30deg celsius in Sweden, carrying out chassis tuning at a test circuit and being analysed by electrical engineers in a laboratory.

Vauxhall recently confirmed that the fifth-generation Corsa weighs up to 108kg less than the its predecessor.

According to Vauxhall, depending on specification, the new supermini can weigh as little as 980kg - roughly 130kg less than the lightest Ford Fiesta.

Like the range-topping variant of the current Vauxhall Insignia Grand Sport, the new Corsa will have an aluminium bonnet weighing 2.4kg less than the steel unit fitted to the current model, as shown in a breakdown of weight savings published by the manufacturer (below). 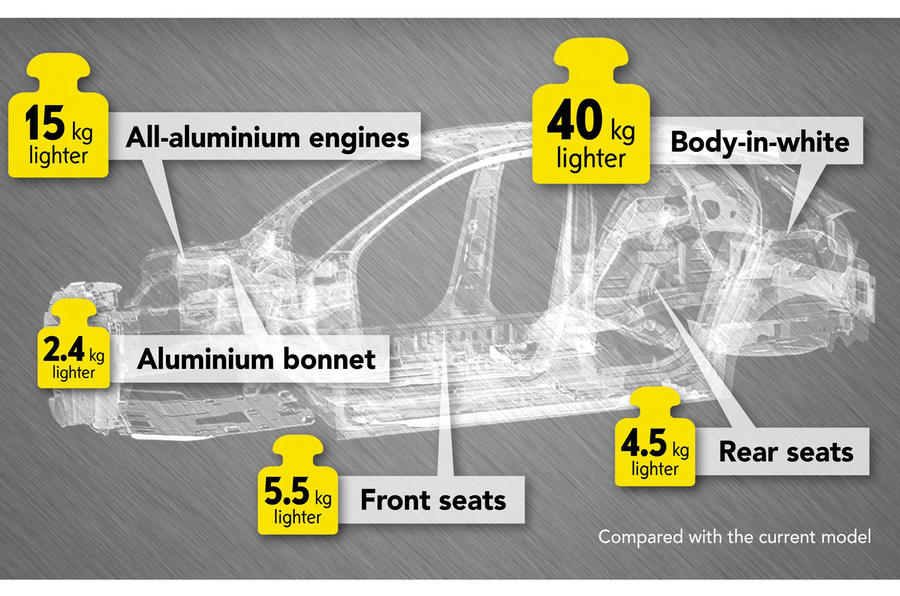 The new Corsa is the first mainstream Vauxhall produced entirely under the brand's new owner, the PSA Group, and is crucial to Vauxhall and Opel's success, given the model's historic popularity. It will also be both brands' first model to be sold with a purely battery-electric variant.

A preview image, released earlier this year, showed the Corsa's headlights will feature adaptive-beam full LED technology - claimed to be a segment first. Usually the preserve of premium models, the LEDs are able to continuously adapt the full beam pattern to stop it from causing glare to oncoming traffic.

The Corsa will set the tone for a new wave of Vauxhall-Opel models, each of which will be overhauled thanks to access to new platforms, engines and hardware that are also used across the group’s other car brands: Peugeot, Citroën and DS.

The new Corsa has been developed in an unusually fast time. Less than two years will have elapsed since work began, just as the deal to buy Vauxhall-Opel was being agreed between PSA and General Motors.

The quick turnaround is due to PSA reversing the original decision for the next Corsa to be based on GM’s architecture. Once PSA had taken over Vauxhall-Opel, it would have been required to pay a licensing fee to GM to use the platform, something boss Carlos Tavares is keen to avoid. 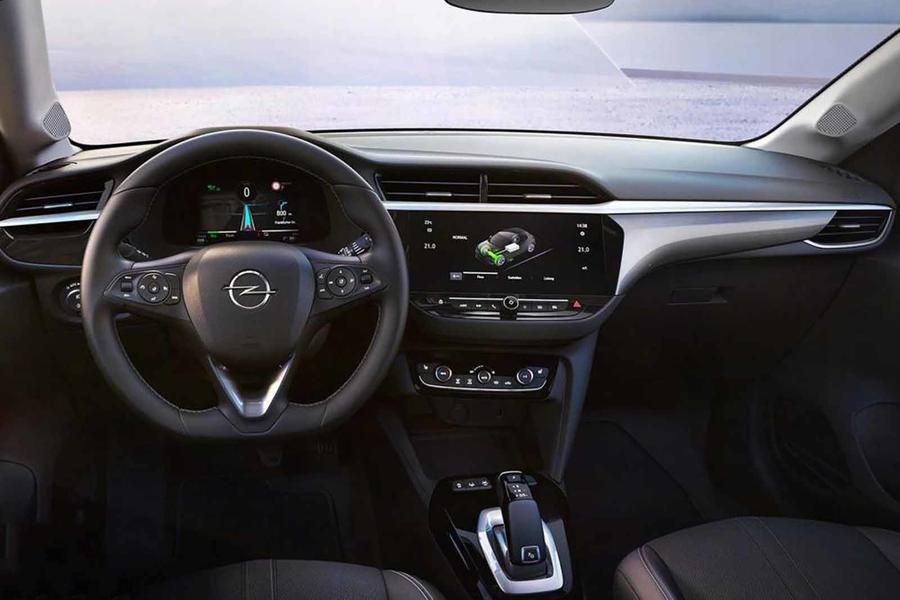 Vauxhall-Opel boss Michael Lohscheller has previously told Autocar that the new Corsa will not be compromised in any way.

"It’s true that we had a version ready to go, and you can’t just stretch a design to fit a new platform," he said, "but the teams have done a fantastic job in record time to ensure that the car is on schedule.”

The new Corsa is based on PSA’s Common Modular Platform (CMP), a front-wheel-drive architecture. The Corsa will also dip into PSA’s engine line-up and is likely to adopt the turbocharged 1.2-litre three-cylinder petrol unit in a variety of power outputs.

Despite the switch to a new platform, the Mk6 Corsa’s dimensions are understood to closely match the outgoing model’s. Vauxhall chose to launch the current Corsa in 2014 with near-identical dimensions to its predecessor, because the company felt it was the ideal size for customers. This strategy is expected to continue. The current Corsa is 4021mm long, 1736mm wide and 1479mm tall, dimensions that make it slightly longer and taller, but narrower, than the existing 208.

The design of the Corsa was set to be evolutionary before the plan for a GM-derived model was axed. Now, to mark a new era for the model under PSA ownership, it has been radically changed.

The three-door Corsa will be axed, reflecting an industry trend to discontinue such bodystyles, which are less popular with buyers. Producing only a five-door Corsa will also help Vauxhall-Opel’s drive for greater efficiency and increased profitability.

Inside, the Corsa looks set to receive PSA’s familiar touchscreen infotainment system, but the overall feel of the interior seems distinct from that of the 208.

Although the Peugeot 208 will get an electric variant first, it and the Corsa will be among the select few in the supermini segment to adopt electrified powertrains. Key rivals such as the Ford Fiesta are not expected to go electric for many years yet. The electric range of the eCorsa is likely to be about 210 miles, in line with zero-emissions rivals such as the Renault Zoe and Nissan Leaf.

The current Corsa was once the UK’s second-best-selling car but is currently fifth in the sales charts, selling less than half of the Fiesta’s sales total each month. The new model will be built at Vauxhall-Opel's plant in Zaragoza, Spain.

The price of the new Corsa is expected to rise slightly over today’s £13,575 starting point for the five-door model but still undercut the 208.

You can assume being based on a PSA platform it should be okay to drive, grey porridge Corsa finally gets some honey and cinnamon.

I think it looks great

I disagree. I think the Citroen interiors are clean and tidy, the Peugeot interiors are stylish and classy certainly not nasty or horrid.

I think this new Corsa in stylish. The interior the only part you got right is a bit bland but it works for VW with there dreary boring cars inside and out.  So why not Opel/Vauxhall too?   At least the outside of a Corsa , Astra and an Insignia is stylish.

Really worried the new Vauxhall Corsa was going to be bland, this certainly isn't. It almost looks ike a mini Volvo, strong features and character, also impressed with the weight reducing measures. Even the interior is simple and attractive. Don't believe I'd say this, but I'd own one.

And how refreshing to see weight reduction

rather than the ongoing trend for bigger and heavier vehicles.