BACK TO ALL NEWS
Currently reading: New Skoda Rapid Spaceback ScoutLine revealed
UP NEXT
Nissan will build batteries in UK to sustain Sunderland plant

Skoda has revealed a more rugged version of its Rapid Spaceback, dubbed the ScoutLine.

Set to go on sale in Europe this July, although already confirmed as not coming to the UK, the ScoutLine features more rugged styling than that of the standard car and is designed, according to Skoda, to help the Czech brand forge a more emotional connetion with its customers.

New styling elements on the ScoutLine include redesigned front and rear bumpers, which have been styled to give the car an off-road look, as well as new side skirts. The car can be ordered with either 16in or 17in alloy wheels.

Power will come from engines already featuring as part of the Rapid Spaceback range, although they do not include the brand's frugal Greenline line-up. The three petrol options range from 89bhp to 123bhp, with two diesels offering 89bhp and 114bhp.

Although the new model isn't coming to the UK, we already get a Scout-badged version of the Octavia in this country. 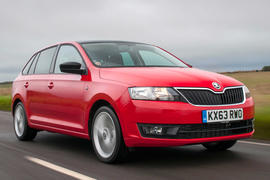 Having driven one, I was very

Having driven one, I was very disappointed, it managed to wallow a bit, while also thumping noisily into potholes (I know drive around them, but sometimes you miss one)was if they had made it poor on purpose to get you into a Polo, have also thought the same after driving an Ibiza ST which suffered excessive road noise.
The Spaceback is a nice looking car though.
abkq 8 July 2015

Maybe I need to see a real

Maybe I need to see a real one. Pictures can be deceptive. And looking at a real one means walking past it or around it so the perspective is always changing. That's the test of whether a design works or not.
Daniel Joseph 8 July 2015

Maybe I need to see a real one. Pictures can be deceptive. And looking at a real one means walking past it or around it so the perspective is always changing. That's the test of whether a design works or not.

Definitely agree with that. I walked around a couple of Spacebacks on display outside our local supermarket. The basic model on smaller wheels actually looked ok, if a little "round shouldered" from the rear three-quarter view. The high specification model with the glass roof big alloys and low profile tyres just looked slightly odd, to my eye at least. The new Fabia Estate, which I saw more recently, actually looked better proportioned and more "planted" on the road.