BACK TO ALL NEWS
Currently reading: New Peugeot RCZ R versus used Jaguar XKR - comparison
UP NEXT
Nissan will build batteries in UK to sustain Sunderland plant

Can Peugeot's 266bhp sports coupé fend off a 500bhp Jaguar? When cost is factored in, it's more of a fair contest than you might think
Share
Open gallery
Close
Share story

Oh for heaven’s sake, at least make it a fair contest.

Sure, the Peugeot RCZ is an attractive car and at its best in the 266bhp R form you see here. It has a fizzy turbocharged 1.6-litre engine, keen front-wheel drive handling and a real limited-slip differential and it costs not much more than £30k. All of which is competitive. All of its numbers are consistent with those of its peers in the new car market.

But, er, well. If you want to see an example of how unfair on new metal the used car market can be, take a look at the other £30k-ish car above. It’s also an attractive 2+2 coupé with hopeless rear seats, but the similarities just about finish there.

It’s a four-year-old Jaguar XKR, a rear-wheel-drive coupé with a 5.0-litre supercharged V8 that would usually make 503bhp. Usually, that is, had owner Edward Boyden not had its induction and exhausts breathed on to help it make about 600bhp.

So what more do you want to know? That seems to about wrap things up, to me. I like the RCZ R quite a lot. Latest 208 GTi aside, I think it’s the best car the company has made for an extremely long time. But which car enthusiast at which car website is going to recommend a 1.6-litre front-driver over one with rear-wheel drive, a supercharged 5.0-litre V8 and the staggering shortage of traction for which Jaguars are known?

Still, let’s have a go, eh? The Peugeot deserves that much at least, because it is, let’s face it, pretty. It’s pleasing enough inside, too, with decent, supportive seats and a wide range of steering column adjustment, compensating to an extent for some slightly awkward pedal and gearshift actions.

Where it’s better than most other Peugeots in general, and RCZs in particular, is in the way that it drives. Its ride is firmish but far from harsh, and it’s impressively composed. It steers pretty fluently, too. There’s some torque steer, of course, because the engine is boosty and the limited-slip diff amplifies that sort of thing. But the benefit is traction beyond that expected of a 250bhp-plus front-driver and a degree of mid-corner throttle adjustability. It’s a good car.

Slide into the Jaguar and you’re not greeted with a gulf in terms of perceived interior quality. This generation of XK went on sale in 2006, and although Boyden’s XKR is a 2011 car and does feel classier than the RCZ, the gap isn’t as vast as you might think, given the price difference when the XKR was new. This was an £80k car, don’t forget.

The Jaguar’s seats are flatter than the Peugeot’s and the wheel doesn’t reach as far, but that’s the limit of the RCZ’s ergonomic advantage. The Jaguar’s control weights are all better – there’s no clutch, of course, because this is an auto only – and the Jaguar is a more comfortable place to spend long periods of time.

And you’ll want to, because it’s rather pleasant to drive. It steers smoothly and rides in that signature way that Jaguars do, with great body control but enough compliance to breathe over bumps.

When the XK was new, we said we probably preferred the softer way that the standard, non-supercharged XK drove – it had a lighter engine in its nose, too, so it felt more agile – but it’s hard to argue with the way that Boyden’s XKR sends itself down the road or lights up its rear tyres.

We wouldn’t usually do that with an owner’s used car, but Boyden, who had a new set of rears waiting at home, made us. We liked him. The ’zorst he had fitted makes a pretty sensational sound, too. An XKR always sounds good. This one has about 35% extra Nascar.

I know what you’re thinking, though. If you buy a new car and you buy it on finance, you might not own it outright yet but you don’t own any of its problems, either. So if it goes wrong, it’s frustrating, but you hand it back and they lend you something else until it’s fixed. All true. 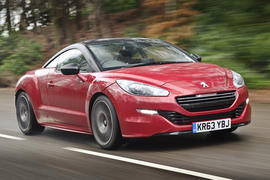 And a 1.6-litre car with a combined fuel economy figure of 44.8mpg – even though you’re not going to get that – will be vastly more frugal than one with a four-year-old supercharged V8 that has since been turned up by 20%. True, too.

But if you buy a four-year-old Jaguar through the firm’s approved used scheme, they’ll throw in a two-year warranty. You’ll also find that there’s a large support network for cars like the XK, including the Jaguar Enthusiasts’ Club, through which we found Boyden. Not that they should need support too often; Jaguar was scoring highly in JD Power customer satisfaction surveys at the time and owners report XKRs are pretty trustworthy.

Check that any potential purchase has decent service history and that every single electrical system works, but the things that go wrong seem to be niggles, not biggies. Boyden’s car seems to be in good fettle; call him on 07904 028763 and he might even sell it to you.

Really, though, what we’re comparing here isn’t just two cars, but two ways of life. One’s a buy-it-new-and-forget-about-it daily driver. I can understand why people do that. But the used car represents an investment of time and interest. That’s more up my street and would be whether it came attached to a supercharged 5.0-litre V8 or not. That it does in this case is a heck of a bonus.

New versus used cars  - which is better?

Some posters do write

Some posters do write bollocks. Having taken care of all my practical needs, I am currently looking to spend $25-$30K on a car purely for fun to replace a Mini Cooper S. I am seriously considering a new GTI, a new MX5, a used Audi S5 and, if I decide to wimp out and get an automatic, a used 550SL. So people do cross-shop used and new. You have to stretch your brain and imagine that not everyone has the same constraints on their purchase as you might do.
gigglebug 21 September 2015

Some posters do write bollocks. Having taken care of all my practical needs, I am currently looking to spend $25-$30K on a car purely for fun to replace a Mini Cooper S. I am seriously considering a new GTI, a new MX5, a used Audi S5 and, if I decide to wimp out and get an automatic, a used 550SL. So people do cross-shop used and new. You have to stretch your brain and imagine that not everyone has the same constraints on their purchase as you might do.

Well you'll obviously look forward to the GTI vs MX5 vs S5 vs 550SL comparison that's coming up soon then! 2 days to come up with that waste of a riposte!! No one was actually grumbling about an old vs new comparison just in the manner it was done and the cars compared and personally I thought it was just another Autocar excuse for promoting JLR again (I might of thought differently if I'd have know it was going to be part of a series of comparisons) Maybe it's you that needs to stretch your brain and read what posters have actually written??

Should have recorded some lap

Should have recorded some lap-times or a set of real-world acceleration figures.
MrCommentsSection 20 September 2015

These old vs new features would be both worthwhile and interesting if they had any legitimacy.

As as already mentioned, the old car costs more to buy than the new one, will cost more to tax/fuel/service/repair and to insure. The depreciation figures have to be factored in.

There is no comparison to be made here. Please put some actual thought
into your articles. Do the basic sums required and come up with costs that match up. Then you have a real comparison and an article worth writing.

Until then, please go back to journalism school.