BACK TO ALL NEWS
Currently reading: New Land Rover Defender V8 gets 518bhp and bespoke styling
UP NEXT
Lamborghini confirms LMDh entry for 2024

The long-awaited V8 version of the new Land Rover Defender brings "a new layer of driver appeal" to the reborn 4x4 alongside a series of updates for the model range.

The 5.0-litre supercharged 'AJ' V8 engine - familiar from performance-focused models including the Range Rover Sport and Jaguar F-Type and now produced in-house by JLR - endows the 4x4 with 518bhp and 461lb ft, making it the most powerful Defender yet to reach series-production.

It's also comfortably the fastest, hitting 62mph from rest in just 5.2sec and topping out at 149mph in short-wheelbase, three-door 90 guise.

Priced from £98,505 for the 90 and £101,150 for the larger, five-door 110, the new addition to the range is marked out visually by its quad-exit exhaust, grey 22in alloy wheels and blue front brake callipers, while a bespoke tune for the induction and exhaust systems should help to tell the V8 apart from its quieter four- and six-cylinder range-mates.

There are nods to the car's performance capabilities inside, too, where the standard leather steering wheel is swapped for an Alcantara-wrapped item and the gearshift paddles are uniquely finished in chrome.

A contrasting black roof is available for cars specified primarily in grey or white, while the special Carpathian Edition gains a contrasting bonnet and tailgate, along with a matt-effect body wrap that protects against scratches and chips. 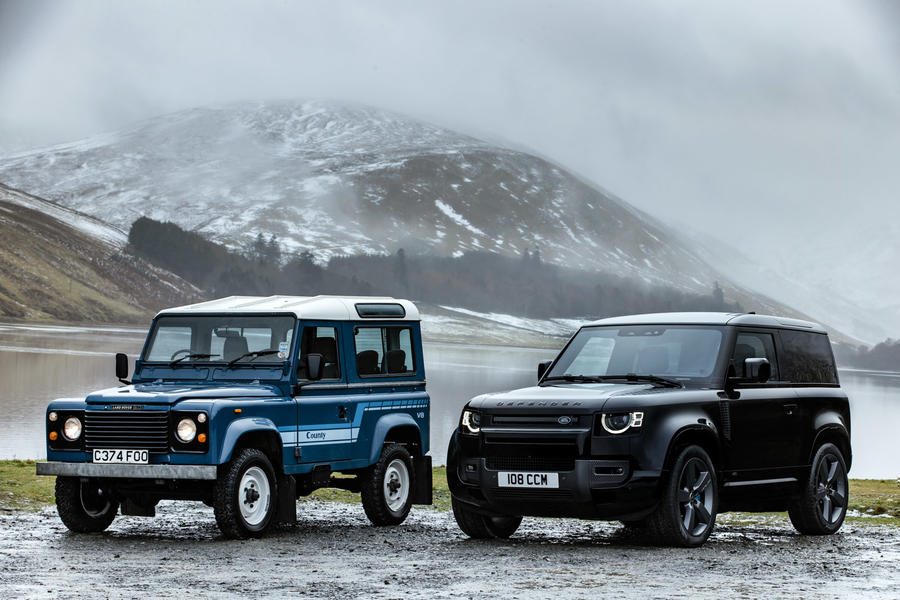 As suggested by previous sightings of Defender V8 prototypes aggressively lapping the Nürburgring, Land Rover has also focused on the range-topper's handling, ushering in a raft of chassis tweaks with the aim of delivering "unrivalled agility and driver appeal" alongside the improved straight-line pace.

In addition to the off-road driving modes offered by the standard Defender's Terrain Response system, the V8 gains a new Dynamic setting, which sharpens throttle response and firms up the continuously variable dampers for a more "playful" dynamic character, both on and off the road.

The V8 also features stiffer suspension bushes and thicker anti-roll bars for flatter cornering, plus a yaw controller in the rear differential that varies torque across the rear axle for maximum grip.

Alongside the introduction of the new performance model, the Defender can now be specified with a larger 11.4in touchscreen - with a 60% larger interface than standard - for the Pivi Pro infotainment system, as well as wireless phone charging and a signal booster.

The V8 Defender is an indulgence that should sell

Video: Land Rover Defender V8 heard for the first time at the Nurburgring

Looks really good, you got to give that to LR. Quality wise, well, I guess it will be as always - patchy to really bad.

It is amusing how the model has gone from farmers workhorse to Cheshire premier league toy, that said, would I like to rag it round some countryside like a crazy guy? hell yeah!!!Fortunately those footballers spreads will have enough grounds they can do that within without killing any ramblers on open land. So, good luck to them, have fun lads!