BACK TO ALL NEWS
Currently reading: New Genesis G90 to rival BMW 7 Series in 2022
UP NEXT
Toyota bZ4X deliveries still on hold after wheel detachment concerns

Genesis has revealed the exterior of its new G90 luxury saloon, which will rival the Audi A8, BMW 7 Series and Mercedes-Benz S-Class globally when it goes on sale next year.

The second generation of the nascent premium marque's flagship has been previously spotted testing in Germany, prompting speculation that it would get a European launch, unlike its predecessor. Genesis says it "plans to expand its presence in the luxury sedan [saloon] market not only in Korea, but across the globe," but Autocar understands there are currently no plans for the model to be sold in Europe.

In terms of its design, the G90 closely resembles the mid-sized G80, but with noticeably more space between its wheels – in line with its luxury billing – and a raft of bespoke design cues.

Genesis describes the G90 as "the most elegant interpretation of the brand's design philosophy of Athletic Elegance yet". 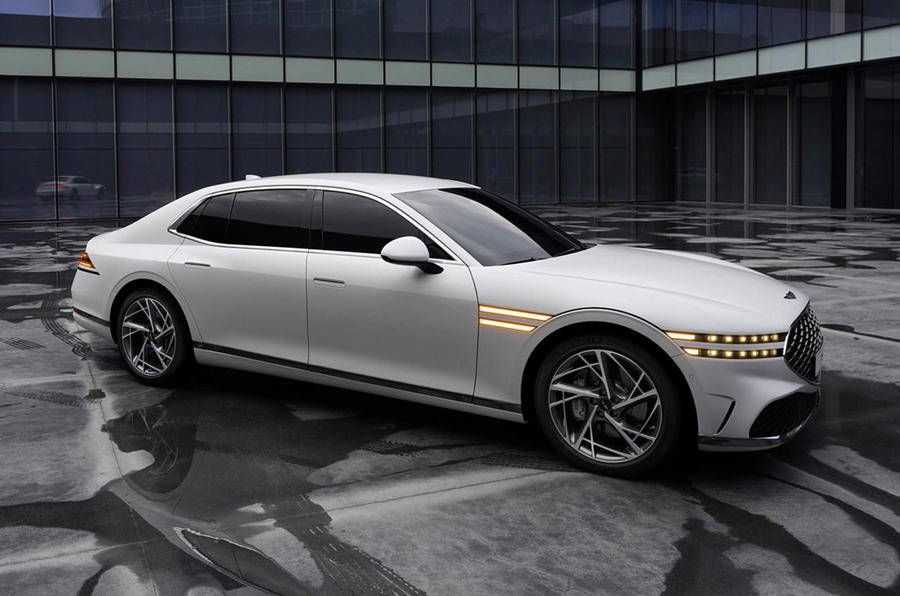 It features the now-familiar dual-line LED headlights that adorn the front end of its sibling models, as well as a sizeable shield-shaped grille – but Genesis highlights that the grille has a "layered architecture" finish, with two "G-matrix" patterns stacked for a three-dimensional effect.

Unlike other Genesis models, the G90 also features a clamshell bonnet "in order to eliminate panel gaps and create a sleek impression".

At the rear, the Mk2 G90 is brought into line with newer models courtesy of its distinctive twin light bars, and to draw focus to that element, the reversing lights, sensors and numberplate have been moved to the bottom of the car.

Like the A8, 7 Series and S-Class, the G90 will be available in long-wheelbase form with 190mm of added space in the wheelbase, although this has yet to be confirmed for a global roll-out.

Genesis has also not yet confirmed which powertrains will be offered in the G90. The current G80 and GV80 range-toppers are available with a 207bhp 2.2-litre four-cylinder petrol or a 300bhp 2.5-litre turbocharged four-cylinder diesel. Both would likely be deemed potent enough for a large luxury saloon, but Genesis models in the US are offered with a 375bhp turbo V6 petrol, which could find its way into the G90.

Log in or register to post comments
MaxTorque 2 December 2021
I think it's a great design - an original and refreshing take on the 3 box luxobarge shape.

It has the look of a Limo from the side view,especially in the dark colour,it looks huge too,I can't think the paying Public will want a car this size.