BACK TO ALL NEWS
Currently reading: New Genesis Electrified G80: EV saloon arrives with luxury focus
UP NEXT
Ford backs call for European ban on new ICE cars from 2035

Shown at the Shanghai motor show ahead of a global launch later this year, the Electrified G80 is the brand's first EV. It will go on sale alongside the conventionally fuelled G80, the GV70 crossover and the GV80 large SUV.

It's yet to be confirmed whether the Electrified G80 will be among the models that Genesis will initially offer when it launches in Europe, but further details of the brand's global line-up are expected in the coming months.

The saloon is visually identical to the standard G80, revealed a year ago, save for the addition of a closed-off grille and bespoke front bumper. It maintains the same premium focus inside, too, with a widescreen infotainment display dominating the dashboard, minimalistic control panel and heavy use of leather.

The twin-motor, four-wheel-drive powertrain offers performance on a par with the new bespoke EVs from Genesis' sibling brands, the Hyundai Ioniq 5 and Kia EV6.

Headline features include an 800V charging system allowing for charge speeds of up to 350kW, a 'vehicle to load' (V2L) external device-charging function and a disconnecting actuator system that switches between two- and four-wheel-drive as needed for maximum efficiency. 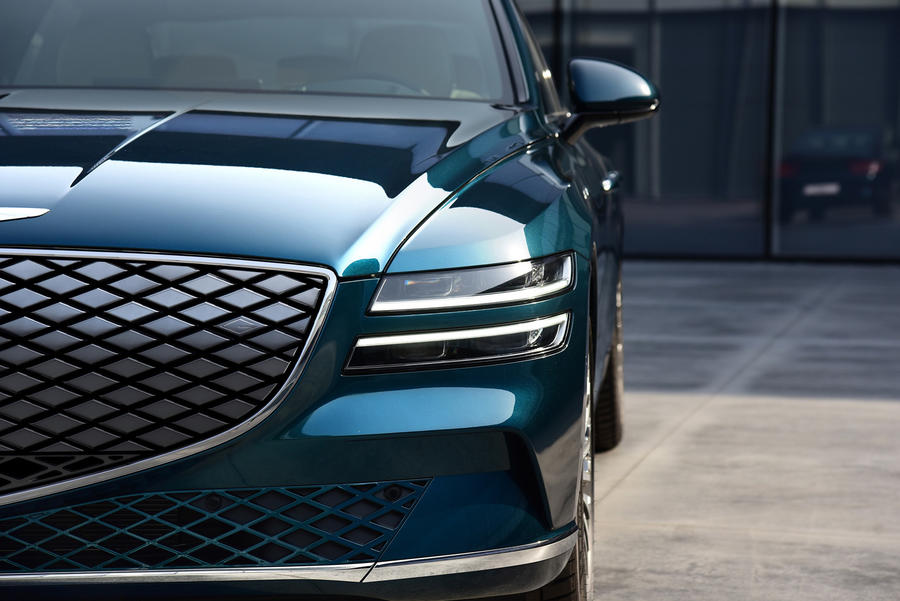 The battery size hasn't yet been confirmed, but the Electrified G80 is said to be capable of more than 311 miles of range on China's NEDC test cycle.

The Electrified G80 also has an Active Noise Control-Road (ANC-R) system that uses an array of sensors and microphones to analyse road noise in the cabin and create "sounds at opposite phase" to cancel it out.

In addition, the suspension system adjusts to suit the road surface using a front camera in combination with the sat-nav to give the "optimum driving experience".

Various sustainability measures including a solar panel in the roof and recycled interior materials are expected to become hallmarks of Genesis's EV line-up.

Speaking at the model's unveiling, Markus Henne, CEO of Genesis Motor China, said: "The world premiere of the first ever electric vehicle of Genesis here in Shanghai shows our strong dedication and commitment to the Chinese market.

"It takes confidence to create something new. In China, we see this spirit everywhere. Genesis will strive to build authentic relationships with Chinese customers through a new China-tailored business model."

The brand's unique retail model in China will use "an omnichannel approach based on direct sales" to appeal specifically to customers in the region.

When Genesis launches in Europe, it will likely operate from established Hyundai and Kia outlets to start with, similar to the relationship between Citroën and DS.

My 2015 Genesis has been a joy to own and I can't wait to get my new EV G80. It looks nothing like an Audi. Are you guys Audi salesmen? If so, start to panic as Genesis swing-in with better reliability, more technology and much less than the German rip-off prices.

Knock off Audi A7. At least they chose one of the less offensive Audis to parody.