BACK TO ALL NEWS
Currently reading: New entry-level RWD Porsche Taycan launches in China
UP NEXT
Sorry, wrong number: the forgotten problem of car clocking

Porsche has introduced a rear-driven entry-level model of its Taycan electric saloon, describing it as “a perfect entry point into the fully electrified Porsche world”.

Badged simply ‘Taycan’, the newcomer is the fourth available version of Stuttgart’s Tesla Model S rival so far, joining the 4S, Turbo and Turbo S. It’s destined exclusively for the Chinese market for the time being, but could come to Europe as Porsche caters to growing demand for electric models. A Porsche spokesperson told Autocar: "There is no confirmed timetable for its launch in other markets."

It’s the first model in the line-up to send its power to just the rear axle. A single Permanent Synchronous Motor at the rear produces 402bhp when paired with the standard-specification 79.2kWh battery, but can be upgraded to 469bhp with the 93.4kWh Performance Battery Plus.

Despite the 67bhp gap, both versions are claimed to accelerate from 0-62mph in 5.4sec with launch control and reach a top speed of 143mph. That compares with the 4.0sec 0-62mph time and 155mph top speed of the 4S, currently the cheapest Taycan available in Europe. 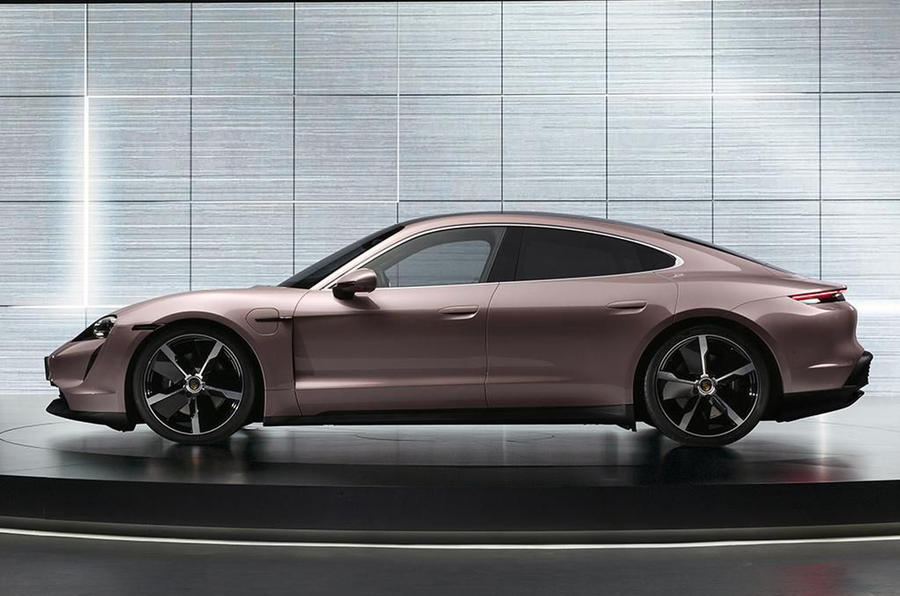 The 79.2kWh unit offers a range of 257 miles on China’s NEDC cycle, while the larger pack takes that figure to 304 miles - the longest-range Taycan yet. However, the NEDC figures are notoriously unrealistic, so it remains to be seen how the new model fares on Europe’s stricter WLTP procedure.

Porsche says the Taycan’s 265kW regenerative braking capacity means “the majority of braking operations in everyday use are performed by the electric motor alone, without the brakes needing to do anything”.

Aside from the badge, there’s little visual indication of the model’s entry-level positioning. Subtle differences include black brake calipers and a set of bespoke 19in ‘Taycan Aero’ wheels.

As standard, the Taycan sits on conventional steel-spring suspension, though the adaptive air suspension system from higher-spec cars is available as an option. Both are equipped with Porsche Active Suspension Management (PASM).

Porsche CEO Oliver Blume told Autocar last year that variable battery configurations allow the sports car maker to introduce market-specific versions of electric models. “In future, you will recognise Porsche all over the world - the same design, the same engineering and quality," he said.

"But we will do special models for certain countries depending on legislation or, on the software side, we will create special solutions for the different needs of customers.”

He added: “We are able to build an entry-level car for China, for example. But [bespoke high-end] models are also possible. It depends on the market. [The US and China are two markets] where there will be a demand for more expensive or more powerful cars.”

Not that acceleration is the be all and end all. It'll still be a lovely thing to sit in and drive.

And all the better for it.