BACK TO ALL NEWS
Currently reading: New DS 9 saloon on sale from £40,615 with up to 355bhp
UP NEXT
Ford backs call for European ban on new ICE cars from 2035

This is the new 9 saloon, DS's range-topping executive flagship, which is based on the PSA Group’s EMP2 platform and is closely related to the Peugeot 508.

Available to order from tomorrow (8 April), the 9 is the third new-era model for the PSA Group’s premium arm following the 3 Crossback and 7 Crossback SUVs - and preceding the recently revealed 4. It will be built exclusively in China, where the majority of sales are expected, and exported around the world from there, with UK deliveries beginning towards the end of the year.

The range of powertrains includes two plug-in hybrids. The range-topper is a four-wheel-drive E-Tense model that mixes a 1.6-litre turbo petrol engine with an electric motor in the eight-speed automatic gearbox to drive the front wheels, and it uses a further electric motor on the rear axle for a combined 355bhp. This is carried over from the new 508 Peugeot Sport Engineered, which brings a more overt performance focus.

A front-wheel-drive plug-in hybrid option new to DS is also offered in the 9. This does without the electric motor on the rear axle to offer a combined 222bhp from the engine and electric motor, both driving the front wheels.

An electric-only range of up to 34 miles is available on this model through the car’s 11.9kWh battery pack. It can be driven on purely electric power at speeds of up to 84mph or left in its standard hybrid mode, which allows the car to decide when best to deploy the electric range. There is also a 222bhp 1.6-litre petrol model without hybrid assistance, but no diesel will be offered.

The two-trim line-up opens up with the DS 9 Performance Line+, priced from £40,615 with the pure-petrol engine or £46,100 with the front-driven hybrid, while top-rung Rivoli trim bumps the price up to £44,715 and £49,200 respectively. Prices for the top-rung PHEV car will be announced later this year, although it is expected to arrive in dealerships at the same time. 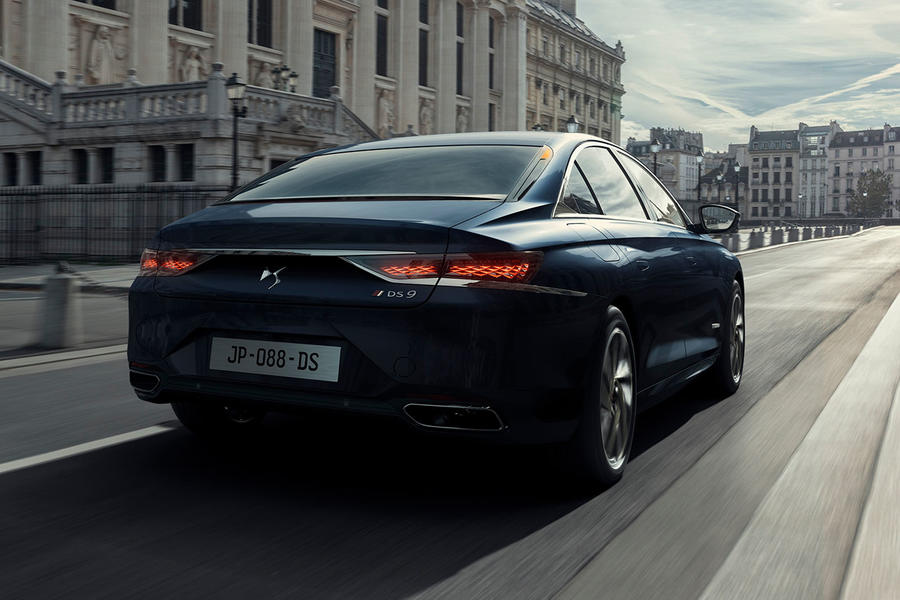 The design of the 9 builds on that seen on the 7 Crossback, which kicked off a new era of independence from Citroën for the DS brand. The saloon is 4.93m long and 1.85m wide, and it has a 2.9m long wheelbase. This makes it more than 200mm longer than its Audi rival, 80mm of which is in the wheelbase, and a similar width.

DS is talking up the rear cabin space of the new car, as well as the high quality trim materials. These include a Nappa leather dashboard, watchstrap-style leather seats, leather door handles and an Alcantara headlining. The rear seats are fitted with heating, ventilation and massaging functions, while the fold-down central armrest doubles as a device-charging bay and control panel.

In a nod to the original Citroën DS model from which the premium brand takes its name, the 9 features unique 'cornet'-style indicators at the top of the C-pillars, while various design flourishes pay homage to the company's Parisian hometown and French car making history.

Dynamically, the 9 comes with MacPherson strut front suspension on all models and double wishbone rear suspension on the plug-in hybrid models. A torsion beam is fitted to the rear of the petrol-only car.

While the 508 is offered in estate form, the DS 9 will remain exclusively a saloon, although a full-electric version is likely to launch in the coming years as DS's Stellantis parent group continues with its landmark electrification drive.

DS boss vows to “do better” in UK with new model​

From the side and rear  it sure looks like a lexus. Not sure how a massive Saloon would sell in this day and age.. For big saloons it has to be a Merc S class or tesla S, anythng else falls by the wayside., total waste of money this car, it brings nothing new to the table

The car has been made for CHINA, end of, thats where, if those that just commented instead of reading it, was intened for ONLY originally, but if they can sell a few elsewhere, fine and dandy.

And for those harping on about ooooooo a French car made in China, ok, what about the South African BMW's, or the US Mercedes, Indian Range Rovers, Slovakian Toyota's, Austrian Jaguars, and thousands of other combinations, they make the cars where they sell, and what is the point of making 95% of them in France just to spend a fortune exporting them to China when they can just make them there. But hey, thats clearly to complicated for some to understand.

Can you just imagine if this was a British manufacturer who set up a factory in China and then sold cars back to us? The Remoaners would be having a field day with " told you so ".

Meanwhile, back in the big world where remoaners dismiss the term 'global forces',  life carries on. A large EU maufacturer like Citroen, a manufacturer who opitimises what French design flair is, are building their cars in China and importing them back to France. This EU lark was never cracked up to be what the remoaners believed it was.

I'd also refer back to an article in Autocar a few days ago about how DS increase their market share in the UK some bloke going on about the need to improve the customer experience. Good luck getting those customers in to your showrooms if this is what DS believe the UK punter will buy. Perhaps their sales teams drunk a wee bit too much cognac when making that decision. Or was it too much Tsingtao?