BACK TO ALL NEWS
Currently reading: New Chevrolet Corvette Convertible gets folding hard-top
UP NEXT
Lamborghini confirms LMDh entry for 2024

Two months after Chevrolet revealed its new 'C8' Corvette Stingray coupé, the brand has pulled the covers off the convertible version.

Continuing the theme of going against tradition with the latest model, not only is it the first mid-engined Corvette drop-top, but it's also the first to use a solid folding roof.

Said to have been engineered “first and foremost” as a drop-top, the new Corvette variant features a two-piece roof powered by six electric motors. It can be activated at vehicle speeds of up to 30mph and retract in 16sec. Chevrolet claims the use of electric motors instead of a hydraulic system improves reliability. 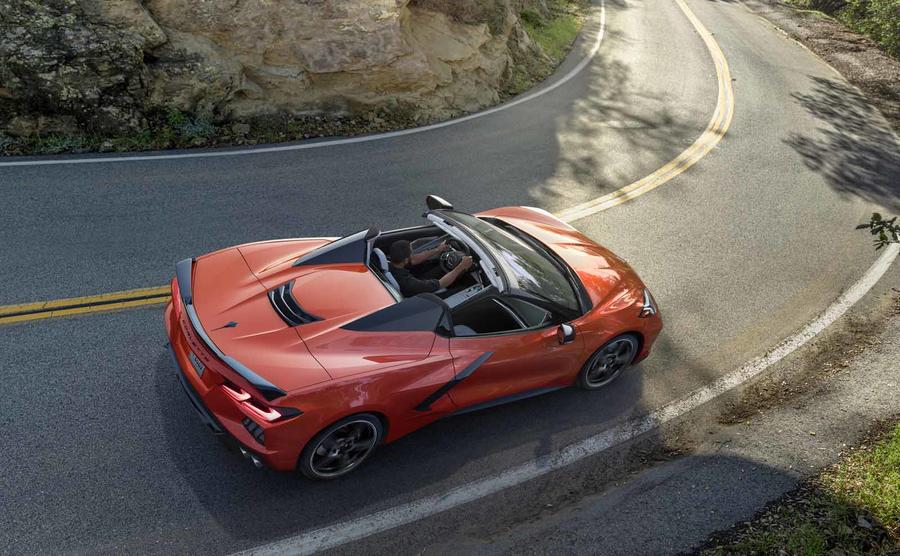 The roof itself, made of composite panels, is said to provide “a quieter cabin, increased security and a cleaner look” than previous soft-tops. It also avoids the usual practicality compromises of a roof of this type, meaning that the car is still able to accommodate two sets of golf clubs in the boot and keeps its front storage compartment.

The roof also features an electric rear window, which Chevrolet claims to have optimised to reduce air recirculation and wind noise. The convertible deploys the same rear spoiler available as part of the coupé’s Z51 Performance Package, with the firm claiming an identical drag coefficient as the coupé.

The 6.2-litre small-blog ‘LT2’ naturally aspirated V8 is unchanged, putting out 495bhp and 470lb ft of torque. No official stats have been provided, but reports from the US claim the performance figures are broadly the same as the coupé's.

Autocar understands that there is a plan to bring the Corvette to the UK in right-hand-drive form next year and it’s likely that the convertible will come, too. It commands a premium of £6000 over the coupé, putting its US price at $67,495 (around £55,000).

The long and winding road to the mid-engined Corvette

This Corvette is not American

This Corvette is not American anymore. It just looks like another mundane European piece of crap.

This Corvette is not American anymore. It just looks like another mundane European piece of crap.

Is it just me?

You are out of excuses

. I don't think that's the attitude to have, if you don't like it, don't read it, it's what the rest of us do.

Out of excuses? For what?

In its proportions maybe, being mid engined as well, but I don't see it, I quite like it though.

I try to avoid a nationalistic bias for or against cars. Indeed, I love American cars in the right environment. Previously that had been North America only, but the Mustang has shrunk and European cars more corpulent and the gap has closed. The current Camera is a sharp-handling car that would surprise many, although it is a little too pricey in its home market.

The worry is that the new Vette will be exported with the old GM attitude that they can premium price. Every time GM tried relaunching Caddy in Europe they assumed that there was a demand and willingness to pay above the class norms. I'm hoping this new Vetta isn't blighted the same way in Europe and it becomes a bargain - it looks way nicer as a convertible than a coupe. I hope that it's 911-competitive and well priced, it would be nice to see the car break through in Europe.