BACK TO ALL NEWS
Currently reading: New Audi S6 Avant - spy pics
UP NEXT
Audi A9 E-tron: electric luxury saloon due in 2024

The new Audi S6 Avant has been spied undisguised ahead of its official launch later this year.

Sources in Germany have indicated to Autocar that new Audi S6 Avant will be a more civilised and refined car than its predecessor. Just as the A6 has become more luxurious in its latest guise, so the S6 will capture much of that refinement and mix it with the smooth yet punchy delivery of a new 4.0-litre turbocharged V8.

The Audi S6 Avant is tipped to get the single-turbo version of the new engine, with an output around 440bhp. A twin-turbo version with around 555bhp is believed to be reserved for the RS6 version but will be seen first in a new entry-point Bentley Continental GT V8.

The new S6 will have just 5bhp more than the 435bhp V10-powered old-gen model, but its performance and economy are expected to better its predecessor’s. New lightweight construction and more compact dimensions mean it will be lighter.

The S6 Avant is expected to feature a seven-speed, dual-clutch transmission, which should be smooth and quick-shifting, as well as having a Sports programme for rapid shifts.

Read Autocar's road test of the new Audi A6 2.0 TDI

Audi’s plans include both saloon and estate versions of the S6. The Avant has generally outsold the saloon in the UK by a ratio of three to two. Sales will kick off in the UK in early 2012, followed in the spring by two further S model variations: the S7 and S8.

Audi is currently mulling over whether to reveal the S7 and S8 alongside the S6 at Frankfurt this September as a major corporate push to blunt the impact of the new BMW M5.

Both the S7 and S8 will feature versions of the new 4.0-litre V8, although it’s unclear whether they will have the twin-turbo 555bhp version or the 440bhp single-turbo variant.

See all the latest Audi A6 reviews, news and video 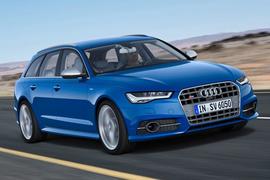