BACK TO ALL NEWS
Currently reading: New Audi E-tron S and E-tron S Sportback arrive as hot electric SUVs
UP NEXT
Tesla to expand select UK Superchargers to other electric vehicles

Priced from £87,000 for the standard SUV and £88,700 for the Sportback, the two range-topping variants are claimed to be the first volume-production cars to use three electric motors. Two are mounted on the rear axle and one sits at the front.

The result is 496bhp and a stout 718lb ft of torque, although these peak figures are available for only 8sec boost periods. The cars dispatch 0-62mph in 4.5sec and have a 130mph top speed.

The trio of motors don’t just improve straight-line pace but are also used to provide an electric torque-vectoring function. In normal driving modes, just the rear motors operate and torque is sent to each wheel via a single-speed transmission. 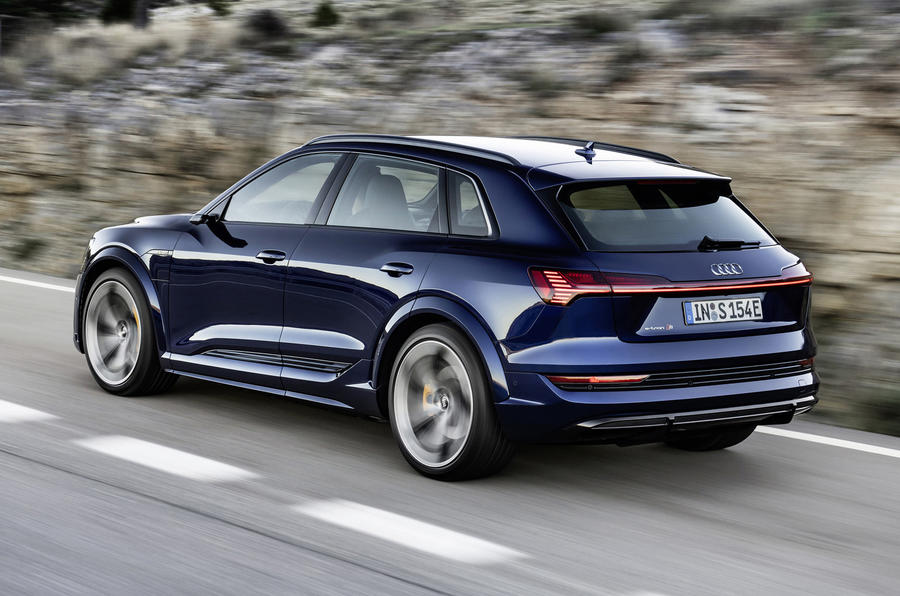 In dynamic driving modes or when full power is requested, the front motor activates. It can also predictively activate when slip is detected and decelerate the inside front wheel on a bend to prevent traction losses. Audi claims the S models can perform “controlled drifts” due to a more rear-biased power delivery than the standard car.

The E-tron S and E-tron S Sportback are powered by a 95kWh battery, with respective claimed ranges of 223 miles and 226 miles on the WLTP cycle. That's around 50 miles less than the most range-efficient E-tron 55 models.

Audi has also tuned the models’ adaptive air suspension specifically for the S variants. The ride height can be varied by up to 76mm depending on driving situation or mode, and progressive steering can increase directness. The brakes are also uprated to six-piston calipers at the front.

Aerodynamic revisions for the S variants include airflow-optimised wheel-arch extensions, which contribute to a drag coefficient of just 0.26 on the Sportback. There’s also a controllable air inlet to cool the brakes that only opens when necessary.

The new wheel-arch extensions add 5cm to the width of both cars, while unique front and rear bumpers aim to boost the sporty look. Silver detailing and aluminium mirrors housing, along with 21in or 22in wheel options, mark the models out as the S variants. The interior brings electrically adjustable sports seats trimmed in fine nappa leather, with the option of carbon trim inserts throughout.

Customers who place an order for either new model before the end of 2020 will receive a free 12-month subscription to Audi’s bespoke charging service, which links 18 different charge point providers with one RFID payment card and one monthly invoice for all transactions. A total of £150 worth of electricity will be provided and Audi will also install a 7kW home wallbox free of charge for these customers.

I reckon Audi are dishing up more new models than all manufacturers added together!
Wonder what's coming next week?
The all new Audi carplane..?
They should focus their attention on a business model that stops a world wide recession would be a start!!
scrap 2 July 2020

The efficiency of this Audi

The efficiency of this Audi is woeful. Massive battery yet it will only do 150 miles or so before anxiety kicks in. Hmm, relaxing!

The point of these cars is to cover long distance effortlessly is it not?

I have to say yes, Tesla are doing it better, maybe not as well made as an Audi, but, most other areas Tesla has the lead.