BACK TO ALL NEWS
Currently reading: New Aston DBS gets 550bhp
UP NEXT
BMW M3 and M4 get radical new look, more power and 4WD

Aston Martin’s new 550bhp DBS is undergoing final testing at the Nürburgring ahead of its launch later this year.

The new model — a huge revamp of today’s five-year-old, £185k two-seater — will get more aggressive styling, a higher-quality interior and more power in an effort to maintain its appeal against the new Ferrari F12 Berlinetta.

This Aston mule is disguised with thin plastic panels, but their relatively tight fit gives clues to the sharper look of the new DBS, inspired by the One-77 supercar. In particular, the new model will feature broader rear haunches with a crisper crease over each rear wheel arch and more pronounced side detailing.

Many of the gentle curves that make the DB9 such a timeless shape have been hardened up on the new DBS, features that will attempt to give it a more distinct identity to better bridge the wide gap between the £150k Virage and the limited-run One-77.

In line with this more aggressive styling theme, the front end of the new DBS gets sportier detailing, with a wider grille and a distinctive airdam chin spoiler that protrudes forward of the front valance.Under-the-skin changes include a power boost of around 40bhp for the DBS’s 6.0-litre V12 to take peak output to 550bhp.

Also improved is the DBS’s ZF automatic transmission, according to sources. It has been described as “new” — understood to possibly be a reference to the latest eight-speed version. And Aston Martin is also said to be ready to drop the option of a conventional manual.

The DBS’s interior will get a dramatic makeover, Autocar understands. Although this prototype is running an existing design, the new DBS will feature significant changes to the driving position and a One-77-inspired instrument pack and centre console.

Exact launch dates have yet to be confirmed, although the summer is being talked about ahead of production in the autumn. That could mean the car will be revealed at Pebble Beach in August. 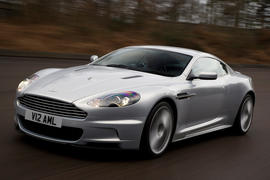 [quote The Special One]

[/quote]
You don't know what the new Aston looks like as it's disguised under fake panels. I'd hardly consider them rivals anyway. People who buy an Aston want an Aston, not a Ferrari and vice versa. Everyone knows the Ferrari will be faster and more hardcore. But yes, 550bhp is rather pathetic isn't it. I'm not sure how they cope with that small amount.

I agree that they are different animals for different owners, but I do get worried that Aston are struggling to move their own game on for the next decade. The "people who buy an Aston (and) want an Aston" don't have any massive incentive to buy the latest one when it looks the same as the one from 2005 that's now available for about £40K.

It worries me where Aston are going- variations on the same thing, do they have the finances for the next generation of DB10 etc....lovely cars but they are going to be left behind soon

They would be stuped to get rid of the manual, it may be a big factor in people choosing it over the Ferrari.

About the same power as a Jag XKR-S then but for £90K more.

[quote The Special One]

Thankfully I don't think Aston have any wish to be as tacky, neuvo riche or charmless as Ferrari.

Aston Martin is ready to drop the option of a conventional manual. Epic Fail!

Love Astons, always have. Many fond memories of driving/riding in them. Best drive of my life was in a DB4, and second best was a twin supercharged Vantage. Loved the old school feel of the current DBS when I had a go............but Customers will buy what they like, Aston or Ferrari, but they are a fickle bunch. If all they see are rehashed models with different names dragged form the past in a seemingly 'pick a name, any name' approach, then they will go elsewhere....I think gone are the days of single brand buyers, certainly as new money comes on the scene. I really fear for Aston, they need to be bought by a larger company. Go on BMW, why not, you dont have a mega sports brand, and the engineering side would be a perfect fit. Also with the environmentally friendly i3 and i8 the co2 output would be factored in and they could get rid of the awful awful cygnet.....

"And Aston Martin is also said to be ready to drop the option of a conventional manual."

NO! That would be a tragic loss. I absolutely loved driving the manual version of the DBS (although a gear link snapped on me once!). That's half the joy of owning this car, that wonderfully huge ally gear knob, heal & toeing up and down a mountain pass, V12 singing all the way like Tom Jones with a hangover. (Probably a Clarkson quote, for which I apologise). But really, that V12 sounds sublime, especially when it's you shifting the metal.

Chasing the numbers isn't an Aston trait. 550 HP in the DBS will be fine. It's more of a gentleman's GT, a California competitor rather that a direct competitor to the F12.

IMO - The best looking Aston ever made. Really looking forward to a drive.