BACK TO ALL NEWS
Currently reading: New 2022 Volkswagen ID Buzz shows off production design
UP NEXT
Hidden gems: A peak behind the scenes at Beaulieu

Volkswagen's retro-styled ID Buzz electric van is being readied for a launch in 2022, and we've had our first look at its production styling, courtesy of a minimally camouflaged prototype.

Previous test mules have worn modified Transporter body shells, but as the reveal date nears, a prototype has been spotted wearing a design that's more faithful to the original concept shown in 2017.

The ID Buzz is the first commercial vehicle to use Volkswagen's modular MEB architecture. It will also gain a passenger-carrying 'Microbus' variant, which will serve as a replacement to the 11-year-old Touran MPV and as an electric alternative to the new Multivan.

The prototype seen here goes without some of the concept's more overtly heritage-inspired design cues, with its steel wheels and all-white paint scheme, but it's expected that passenger versions will be available with two-tone liveries and design cues that nod to the old Type 1 Microbus.

Volkswagen designer Frank Welsch told Autocar last year: “MPVs aren't over, although demand is going down a little bit. They need better design now. This is why the ID Buzz is quite emotional in design.”

Some of the concept's more outlandish styling elements, it appears, have been toned down. The crescent-shaped LED headlights have evolved into more conventional clusters and the windowline is less dramatically curved, for example. But the overall silhouette remains familiar and is substantially differentiated from the conventionally fuelled Multivan. 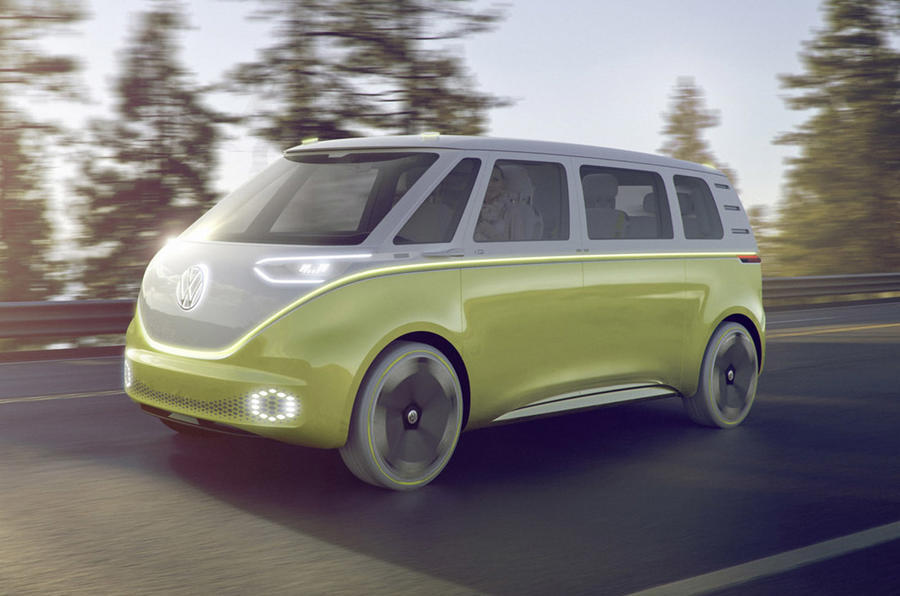 The ID Buzz is like to offer the same array of batteries and drivetrain configurations as the related ID 4 SUV, ranging in output from 148bhp to 201bhp, with the potential for a sportier 295bhp four-wheel-drive variant at the top end.

Notably, the ID Buzz will play a crucial role in bringing Volkswagen's self-driving technology - supplied by Argo AI - to market. From launch, it's set to be equipped with an array of Level 3 autonomous functions, but Volkswagen plans to roll out Level 4 capability shortly after.

Volkswagen Group subsidiary Moia has already confirmed that it will be the first company to make use of the self-driving ID Buzz as part of its ride-pooling service in 2025.

the chrome strip is fake, you see it runs over the cut out of the headlight fitting.

It needs someone with photo shop skills to paint out the fake bits and look at the actual shut lines to get an idea of what it will look like.

Most of it is camouflage. Bit misleading of Autocar to say that it is "showing off its production bodywork" because really it's hiding most of it with tape and visual trickery. Look beneath and lots of the concept seems to be intact. I do hope that chrome strip leading from the badge to the lights is fake, too - because the Buzz doesn't need that. Intriguing to see only one set of conventional side door handles.