The new Volkswagen Multivan has been revealed, marking one of the most significant reinventions for the company's largest MPV in its 71-year history.

Volkswagen has ditched the Caravelle name to reflect the MPV's comprehensive reinvention and the fact that it no longer shares its underpinnings with the Transporter commercial van. It is effectively now a standalone model, with the commercially focused Transporter model soon to be replaced by a Ford-built successor, twinned with the Transit.

Instead, the seven-seater has made the switch over to an extended version of the Volkswagen Group's MQB platform, which is also used by the Seat Tarraco, Skoda Kodiaq and Volkswagen Tiguan.

That switch paves the way for a raft of landmark technological, stylistic and ergonomic enhancements, while also allowing the MPV to adopt its first ever plug-in hybrid powertrain.

The Multivan eHybrid pairs a 148bhp turbocharged 1.4-litre petrol engine with a 114bhp electric motor on the front axle for a combined output of 215bhp, while a 13kWh battery under the floor allows for electric-only running on "short urban trips" - Volkswagen has suggested a maximum EV range of around 31 miles.

Also available are 1.5-litre and 2.0-litre turbocharged petrol engines, plus a 201bhp diesel will join the line-up next year.

While the PHEV gets its own six-speed dual-clutch (DSG) gearbox, the conventional petrol variants use a familiar eight-speed item. 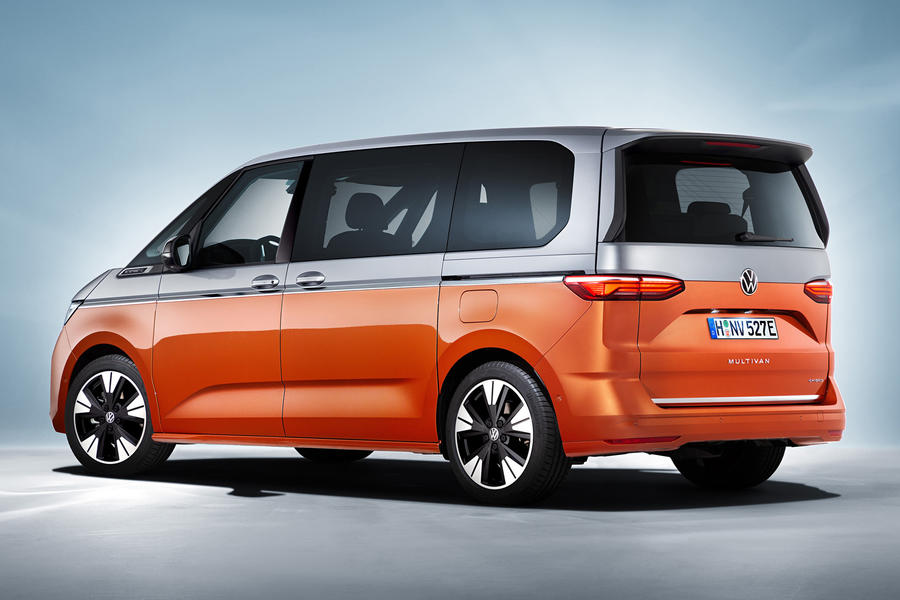 Along with the mechanical revisions, the seven-seater has been completely redesigned, with stylistic nods to the 1985 T3-generation Transporter among its defining features.

In typical fashion, it's available in a horizontally split two-tone livery, but a full-width grille and sharp LED lights set it clearly apart from the outgoing Caravelle.

As standard, the Multivan measures 1941mm wide, 4973mm long and 1903mm high (a 5173mm-long extended-wheelbase option is also available), making it slightly larger overall than the T6-generation model. Improved aerodynamics are claimed to improve efficiency, too.

Volkswagen claims the Multivan is "more flexible and spacious than ever" inside, highlighting a new modular seating system and multifunction table. The five rear seats can be removed entirely, while the second row can be spun around to create a social seating arrangement.

Crucially, Volkswagen says, the removal of the centre console - made possible by the removal of the conventional handbrake and gear selector – has allowed for a flat floor throughout the entire cabin, giving the base version 469 litres of boot space, extending to 1844 litres with the rearmost seats removed. 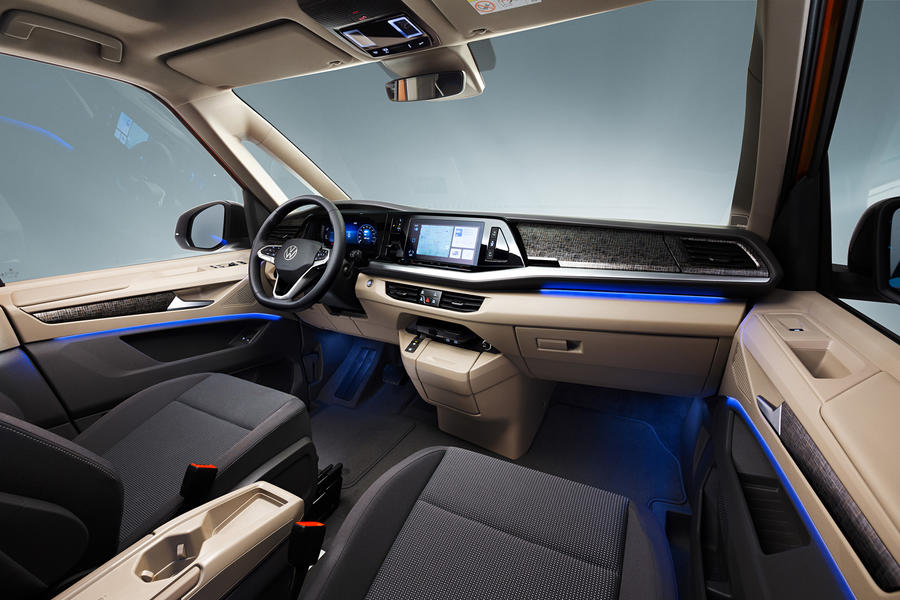 The driver's area has also been subject to radical revisions to bring the Multivan more closely in line with Volkswagen's latest cars. A new multifunction steering wheel, a 10.25in digital instrument display and a 10.0in infotainment touchscreen are standard features, while optional upgrades include a head-up display and a wireless smartphone charger.

The Multivan is Volkswagen's first commercial vehicle to get the new IQ.Drive system, which uses the adaptive cruise control and lane-keeping assistance functions to enable what it calls "semi-autonomous driving" on long-distance journeys.

Volkswagen has yet to confirm pricing for the Multivan, but prices for the outgoing model start at around £50,000, and a slight premium over that can be expected.

Log in or register to post comments
Commenter 15 June 2021
There has been multivan that is placed above the caravelle in price as a true luxury van for at least the past two generation. If the caravelle is dropped from market by range simplification, not because of replacement. Multivan is what audi would sell if it follow Lexus's lead in china which rebranded Toyota's alphard van. They lack the quirk of ssangyong which offered the rodius with hinged rear doors rather than sliding ones.
jag150 11 June 2021
Never understood why the Caravelle was just 7 seats.
Must have missed out on lots of sales.
gavsmit 11 June 2021

The other day I thought I'd look into the possibility of buying a van because cars have become so obscenely expensive.

I needn't have bothered.