BACK TO ALL NEWS
Currently reading: New 2022 Toyota Corolla Cross confirmed for UK
UP NEXT
Fisker goes radical with Pear EV SUV

It has now been confirmed that the new Toyota Corolla Cross will go on sale in Europe and UK deliveries will start next autumn.

It completes the Toyota SUV line-up, sitting between the Toyota C-HR and Toyota RAV4, as a mid-sized SUV aimed at active families.

The European-spec car is almost identical to the US-market version, which was launched last year, but the car revealed today gets a unique headlight and tail-light cluster design, double trapezoid front grille and flared wings as a means of differentiation.

The Nissan Qashqai rival sits on the TNGA-C mid-sized platform, which it shares with the Toyota Prius, C-HR and Corolla, and measures 4460mm long, 1825mm wide and 1620mm tall.

It receives Toyota’s fifth-generation hybrid powertrain, which promises greater efficiency and more torque. The updated system, in front-wheel-drive form, uses a four-cylinder 2.0-litre petrol and electric motor for a combined output of 196bhp, and a 0-62mph sprint time of 8.1sec. The four-wheel-drive version adds a second, 41bhp EV motor on the rear axle, but Toyota is yet to confirm performance figures. 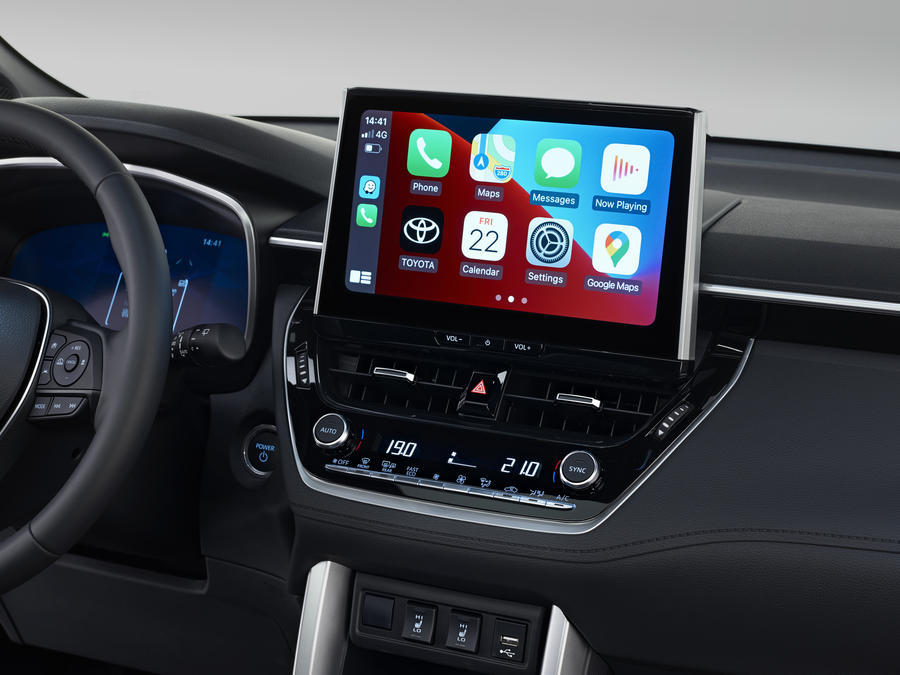 Improved efficiency is achieved by reduced friction, improved lubrication and an uprated motor. Using the latest lithium ion batteries, the battery pack is more powerful and 40% lighter than before.

Referring to its drivability, Toyota claims the system is more linear and controllable under acceleration while vehicle speed better matches engine revolutions to “provide a more intuitive and natural driving experience”.

The model gets a Europe-specific dashboard layout, including a new 12.3in digital cockpit and 10.5in touchscreen infotainment system, which features wireless Apple CarPlay and Android Auto connectivity.

It also has the maker’s latest Toyota Safety Sense package, which offers a host of driver assistance systems such as a pre-collision system that slows acceleration at low speeds and cut-in traffic assist. Over-the-air updates will keep existing functions up to date and add new ones over the car’s life.

The Corolla Cross goes on sale in spring 2022, ahead of deliveries in the autumn. Pricing has not yet been announced but is likely to be just under £30,000 to position it between C-HR and RAV4 pricing.

Electrified, Toyota desperatley trying to make us think it's a electirc car, it's a plug-in hybrid with all the inherent inefficientencies, Toyota have fallen behind on the BEV front due to wasting money on hydrogen and are now playing on words

Have Toyota been getting it's press releases out early before Christmas? there's six news items on Toyota or Lexus in the Autocar today much more than usual. So what is the Corolla Cross? yep it's another SUV to fill inthe supposed gap between the C-HR and the RAV4 and aimed at "active families" Well a little research would have shown that already both the cars overlap in the Toyota range the upper range of C-HR is in the same price range of entry level RAV4's. So Toyota have solved the problem if a small stylish SUV is what is required buy a C-HR,if something bigger is required then the RAV4 is the go to choice. I'd think that these "Active Families" wouldn't be seen dead in Corolla Cross given the choice of the other two. The press release is full of marketing guff such as"Provides a more intuitive and natural driving experience" mean? surely to achieve that couldn't all the  driver assistance aids be pulled out and a manual gearbox be offered instead? Actually the Corolla Cross shares a lot with the forthcoming Mazda CX-50 being built in the new joint Toyota/Mazda facility in Alabama. so is it likely to sell? there's nothing special about it,it's expensive there's better vehicles already in the Toyota range,so I suspect that like the Camry it won't last long here

martin_66 2 December 2021
How Extraordinary. I'm still looking at it and I have already forgotten what it looks like.

This would be the perfect car to commit a crime in. Absolutely nobody would be able to pick it out in a line-up.