BACK TO ALL NEWS
Currently reading: New 2022 Subaru WRX previewed ahead of reveal this year
UP NEXT
New 2023 Audi A4 Avant undergoes tests in the Alps

New 2022 Subaru WRX previewed ahead of reveal this year

Subaru is bringing back the hallowed WRX nameplate once again for a four-wheel-drive performance saloon based on its mass-market Impreza.

Previewed for the first time in a darkened image, the new model will revive characteristic WRX styling cues including a gaping bonnet scoop, while retaining its four-door, three-box silhouette. Wider fenders and a prominent rear wing are almost certain to appear, too, as part of a more aggressive stance inspired by 2017's Viziv Performance concept.

The Japanese manufacturer is not divulging further details, save for promising that it "will be here so fast, it will take your breath away". It will also, Subaru said, be "powerful, agile and completely redesigned". 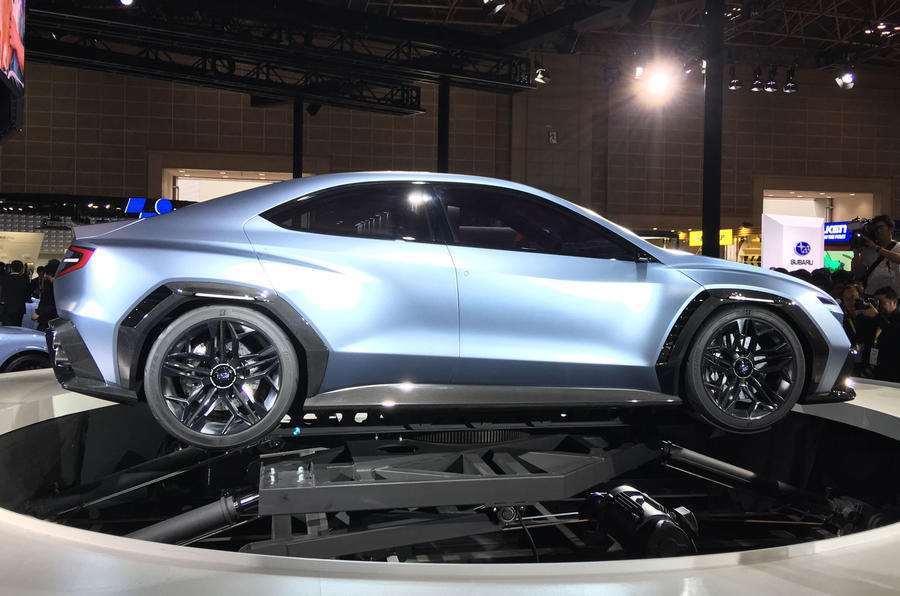 The previous-generation WRX - in top-rung STi form - was taken off sale in the UK in 2018 for two reasons: having ended its World Rally Championship campaign, Subaru had no need to market a homologated road car based on its rally car, and its 396bhp 2.5-litre flat-four engine fell foul of increasingly stringent emissions regulations.

It is highly likely that these same emissions regulations will prevent Subaru from marketing the BMW M2 rival in Europe, given it is widely reported to adopt the same 2.4-litre naturally aspirated boxer engine used by Subaru's new BRZ, which is a US-only car.

Subaru's UK line-up has evolved into an SUV-focused offering, comprising the Outback, XV and Forester, and will expand next year with the arrival of the new, electric Solterra - a four-wheel-drive family SUV based on the new e-TNGA platform co-developed with Toyota.

Farewell to a classic: driving the last Subaru WRX STi

Log in or register to post comments
MarkII 30 June 2021
Here's a left field idea; If Subaru's own flat four won't pass European emission regs, why not do a deal with Porsche for the 718's 2.5 flat four - No prospective Porsche owner really wants one in their Boxster/Cayman ;)

PS: Not a real suggestion, just a bit of fun...

We have to remember what Subaru UK did to undermine their own sales.

Decided they wanted to move up market to compete with VW so they stopped importing their biggest successes and increased the price of their other models.   And because nobody was fooled by it, then had to sell stock at massive discount.

Except if you looked on other Subaru websites from around the world you could get all the different combinations that customers were asking for.   Strange that one.

However, I was going to buy the hatchback STi until I tried it.   It hung on like a leach when you were going for a white knuckle ride, but was terrible for just pottering about with the light steering.   And you had to put up with a handbrake leaver sticking in to your thigh.   And the extra £2k for decent looking wheels.

Then I made a mistake and bought a BMW...   Great when they work, but I went from a very reliable Subaru to something that spent a lot of visits to the service centre.   Not all the problems were engine, but many of them.   And there was many problems.

Full disclosure - The only problem with the Subaru was drop links for the anti-roll bars knockng and they were quickly replaced under warranty just before the three years was up.   I kept it for longer, of course, and it served me very well.