BACK TO ALL NEWS
Currently reading: New 2022 Mercedes-AMG SL to be revealed today
UP NEXT
First drive: 2022 BMW XM prototype

AMG-engineered Porsche 911 rival will break cover this afternoon, showing off total overhaul inside and out
Open gallery
Close

The new Mercedes-AMG SL roadster will be fully revealed later today, following the model’s official interior preview back in July.

Mercedes-AMG has also confirmed the model will be equipped with all-wheel drive for the first time. The firm revealed the model’s interior less than a month after a partially disguised prototype was spotted testing ahead of the car’s launch later this year.

The interior design takes its inspiration from the Mercedes-AMG GT and Mercedes-AMG GT 4-Door Coupé, according to Mercedes, but here the centre console is dominated by an 11.9in touchscreen. The company said the portrait orientation is better for navigation, and the entire screen can be tilted electronically to give drivers the best possible view.

Running the brand’s MBUX infotainment system, the 12.3in instrument display is fully digital, and drivers can customise the menus to suit their individual preferences. Mercedes claimed the screen “is not designed to be free-standing but integrated into a high-tech visor” that prevents glare caused by sunlight.

There is also an optional head-up display that can show the car’s surroundings in 3D. 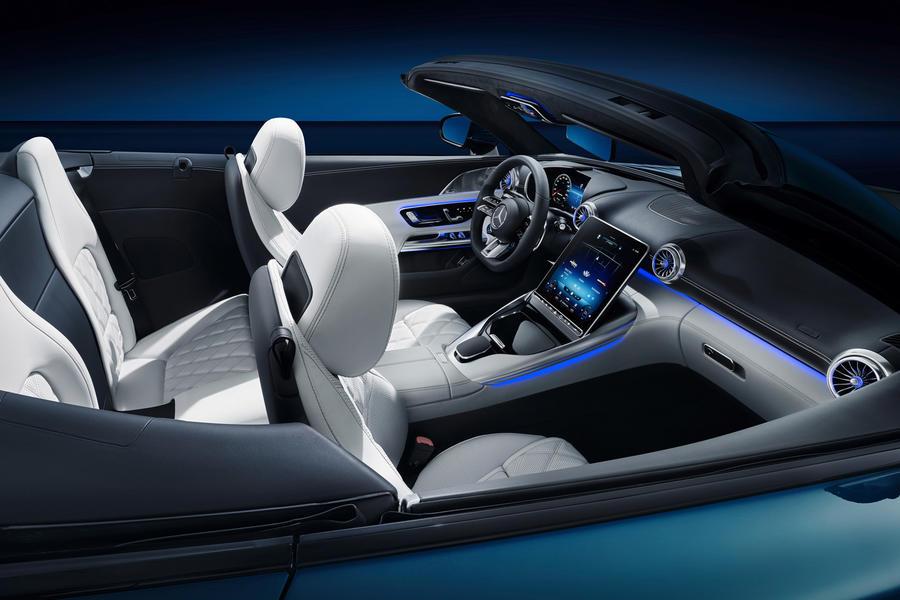 The AMG SL adopts a 2+2 seating layout for the first time since the Mercedes SL R129 model from 1989. The rear seats are suitable for children, and when they are not in use, Mercedes says a draught stopper can prevent unwanted airflow around the driver and front passenger.

In keeping with the car’s sporty yet comfortable brief, Mercedes has paid close attention to the interior finish. Buyers can choose from single- or two-tone nappa leather, which can be combined with a variety of stitching colours. Burmester speakers are integrated into the doors, and 64-colour ambient lighting allows drivers to adjust the mood of the cabin.

"The interior of the new Mercedes-AMG SL pampers driver and passengers with sophisticated luxury,” said Philipp Schiemer, Mercedes’ chairman of the board of management. “The new SL combines the highest levels of comfort and quality in its interior, coupled with just the right amount of sportiness. The high-quality combination of analogue world and state-of-the-art digital equipment makes one thing clear: the new SL is the rebirth of an icon for the modern era.” 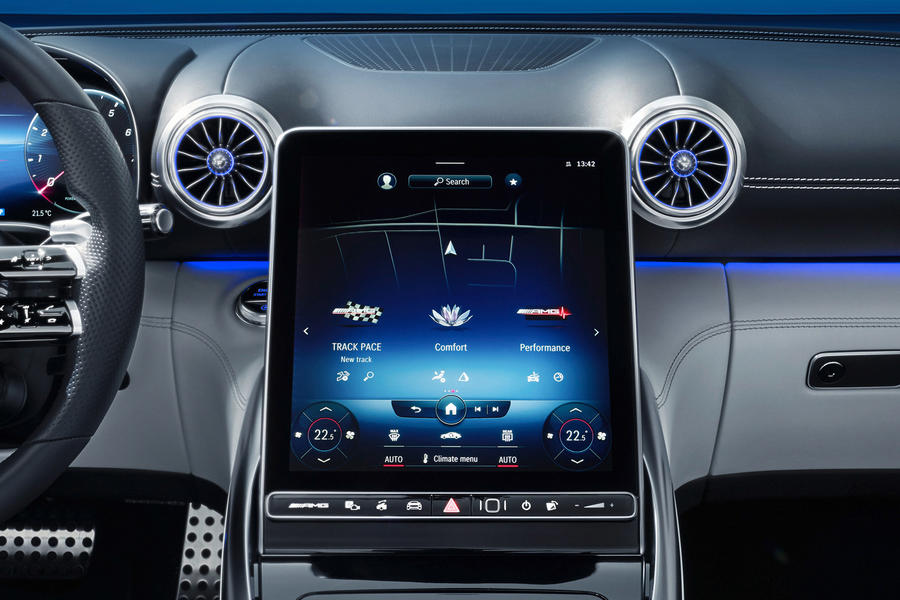 Last month, Mercedes revealed details of the new AMG SL in the build-up to an anticipated launch later this year. The new model uses an aluminium spaceframe with a “self-supporting structure”, and a wider range of powertrain choices will be offered.

A mix of aluminium, steel, magnesium and fibre composites result in an 18% increase in stiffness over the old model, and the main shell of the car – without the doors, bonnet or bootlid – weighs 270kg. The new SL will be offered with a fabric roof, and 4Matic+ all-wheel drive is expected, too.

Is there such a thing as too much?, would you use all the tech built into this over designed interior?, because I think it doesn't look the money,and, why bother with backseats?, they'll hardly be used, if your a Family of four you'll have an SUV or something large enough to suit,and that goes for all 2+2 cars like this.

QuestionEverything 15 July 2021
Mercedes get tackier & tackier with every new model or model refresh. Their cars are aimed at the shallow, dimwitted Instagram generation who go to Dubai at every selfie opportunity. There's a line between luxury & bad taste and Daimler Benz have well and truly crossed it. Also, as an ergonomist I'm shocked at how so many basic ergonomic principles have been utterly ignored with the heavy dependence on the touchscreen. It's incredibly bad & dangerous. BMW and Mazda (& to a lesser extent Jaguar) seem to be the remaining manufacturers who actually consider ergonomics in their cabin design these days. Tesla are the absolute worst. It's almost as if they've gone out of their way to flout every single piece of good design principle. Manufacturers need to remember that a car is not a smartphone on wheels.
Parabolic 14 July 2021

The Mercedes bling theme that is prevails in all models is why after many years of Merc ownership I switched to an Audi S6. I just couldn't stand living with a Merc interior.