BACK TO ALL NEWS
Currently reading: Mystery Ferrari LaFerrari prototype spotted with new bodywork
UP NEXT
EV start-up Aehra to launch “ultra-premium” SUV and saloons

Seven years after Ferrari's landmark hybrid hypercar was launched, a new LaFerrari-based prototype has been spotted testing on Italian roads.

Wearing only light camouflage, the mule makes no attempt to hide its LaFerrari-derived bodywork, and the blue triangular sticker on the side confirms that it, too, is driven by a hybrid powertrain.

There is little chance that this is a development chassis left over from the testing programme for Maranello's hyper-hybrid, though. Firstly because the camouflage looks to have been freshly applied and bears a pattern different from that sported by the original LaFerrari mules, and secondly because there are a number of subtle but important visual differences.

The wheels, for example, are attached to the hubs by five conventional studs, whereas the production-spec LaFerrari used a centre-locking device. The front end looks to have been reshaped, too, with the lower bumper losing its central divider and gaining a pair of prominent air-channelling winglets at the side. 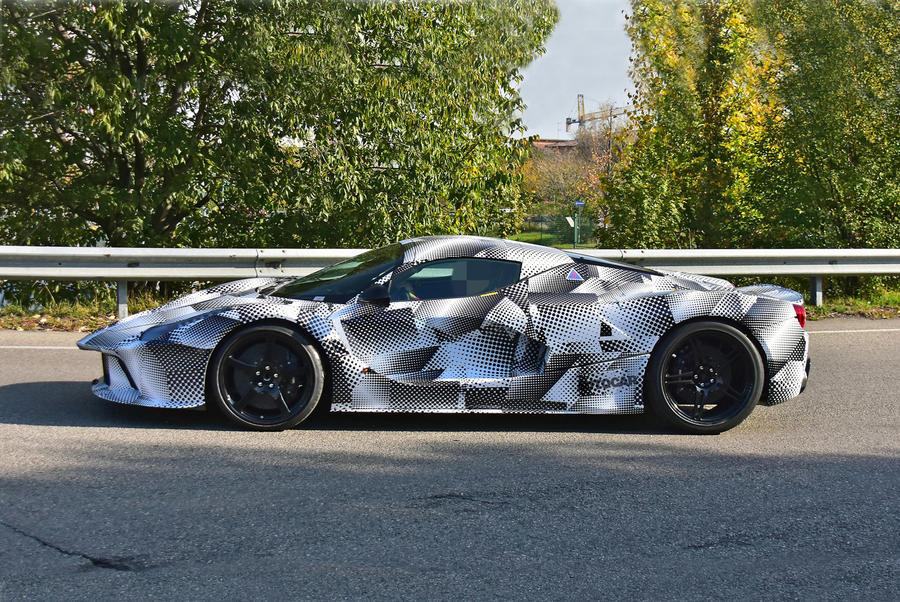 More significantly, the roofline seems to have been reshaped and a new engine cover installed, hinting at a different-shaped powerplant from the electrified, mid-mountred 6.3-litre V12 that motivated the LaFerrari.

A Ferrari spokesperson declined to comment on the images and it remains unclear whether or not this is a simply a LaFerrari bodyshell being used to conduct testing of new mechanicals for other models.

However, Ferrari tends to launch a new hypercar every 10 years and it's nearly eight since the covers first came off the LaFerrari. Ferrari's chief technology officer, Michael Leiters, told Autocar last year: “It is true that almost every 10 years we bring one out. It’s also true that Ferrari only does one when new technology is available. So we have to understand what is the technology we want to be on new supercars.”

The brand's second hybrid, the SF90 Stradale PHEV, packs more power than the LaFerrari, but is unlimited in its production and costs about a third of the price of the older limited-run car, so it does not serve as a direct replacement. If Ferrari is developing a true hypercar, it will likely be designed to compete with the Aston Martin Valkyrie, Lamborghini Sián and McLaren Speedtail.