This is the new VW Scirocco R, the first in a new generation of lighter, simpler performance cars from Volkswagen with smaller engines, lower fuel consumption and improved emissions.

The new Scirocco R has a 2.0-litre, four-cylinder engine, which will effectively replace the six-cylinder engines used by the last R-badged Golf, the R32. It’s part of a strategy to cut the fuel consumption and emissions of performance VWs and increase the social acceptance of the cars.

The new range-topping Scirocco’s engine is a modified version of the last Golf GTI’s EA113 2.0-litre with direct injection; the latest GTI uses the EA888 2.0-litre. It has a higher compression ratio than the GTI’s engine and was chosen because it’s easier (and cheaper) to modify than the newer powerplant.

The R’s engine gets a new head, uprated pistons and conrods, and higher-pressure injectors. The turbo produces more boost, and there’s a new intercooler to deal with the extra heat.

Combined, these changes give the new engine 261bhp and 258lb ft — and all of the torque is available from 2500rpm through to 5000rpm, one of the advantages of using direct injection on a petrol engine. A six-speed manual transmission is standard, while a six-speed, twin-clutch DSG is optional.

The car isn’t four-wheel drive either, unlike previous R models. Volkswagen is confident it has produced a front-drive sports hatch that will handle as well as a Golf GTI, despite having more power.

Dumping four-wheel drive also helps keep the weight down; the R has a 1333kg kerb weight for the manual car and 1353kg for the DSG-equipped car — considerably less than the old Golf R32, or indeed the new Ford Focus RS. Combine those figures with the power output and the R turns in a 0-62mph time of 6.4 sec, faster than the R32. Fuel consumption has improved, too. The R returns 34.4mpg and emits 192g/km of CO2, a big leap forward from the R32. Removing four-wheel drive has helped to reduce the weight, but so has not fitting electric seats.

The Scirocco R’s chassis has also been significantly upgraded. Lowered suspension, different dampers and new springs will help the Scirocco’s handling, along with a reworked version of Volkswagen’s Adaptive Chassis Control (ACC). And the GTI’s electronic XDS differential has been reworked to suit the R engine’s power and torque delivery.

The car’s exterior has new front and rear bumpers, with big air intakes at the front, new side sill covers and a new grille. At the back there’s a new roof spoiler and smoked light lenses.

The R goes on sale in September, with the first deliveries in October. Volkswagen isn’t revealing official prices until later this year, but expect the car to cost in the region of £25,000 – making it a direct competitor for the likes of the Focus RS. 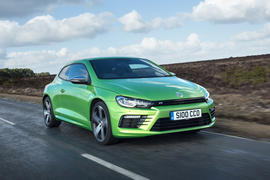 Is the Volkswagen Scirocco R more engaging than a very competitive array of hot hatch and small coupé rivals?