Mitsubishi is working at top speed on an all-new range of plug-in hybrid and electric SUVs, aiming to establish itself as  the world leader in a niche  for environmentally friendly soft-roaders and lift its image and prices towards the premium bracket.

The plan, outlined exclusively to Autocar by Mitsubishi chairman and CEO Osamu Masuko during a visit to London, follows the impressive sales performance of the Outlander PHEV, launched last year. UK sales to the end of June 2015 totalled 7255 units, more than double those of the Nissan Leaf. Last year it topped sales of electric cars and PHEVs in the UK and Europe.

Masuko said that between now and 2020, Mitsubishi will build a five-tier line-up of SUVs, four of which are likely to be plug-in hybrids or EVs.

The line-up will start just above the B-segment with a downsized ASX and reach as  far as the Shogun.

Masuko said the next ASX is likely to be the world’s smallest SUV with pure battery-electric power, although the company has still to reach an final decision on that. It might still  be a PHEV. However, hints of an all-electric ASX could come with the unveiling of the eX concept at this month's Tokyo motor show. The eX features an electric all-wheel drive powertrain.

There will also be an all-new SUV between the ASX and Outlander (the latter will grow  a little to make space for the new model), and between  the Outlander and regular Shogun the company will add  a ‘Shogun Sport’, described as “a conventionally powered pure off-roader”.

Both the proposed all-new model and the Outlander will be PHEVs. The Shogun flagship is also likely to be a plug-in, although again the final decision has yet to be taken.

Masuko said that although Mitsubishi never expected the Outlander PHEV’s success to be as dramatic as it has been, he was pleased if it encouraged other manufacturers to move more quickly into the sector.

“It is true that at first we didn’t have to fight other competitors and that in future we will face fierce competition,” he said. “However, the signs that PHEV technology is spreading are positive. That means it will become a major technology for the future.

“We must look very carefully at where society is going, and at the progress of battery technology, before taking these decisions,” he added. “If we were to make the wrong decision, a small company like ours would not be able to compete. But we must reach our decisions quite soon.

“We see our future role as being to offer specialised technologies others don’t have; not a huge number of them but several that are very special. My own view is that the ultimate form for the vehicles of the future is the pure EV.”

Mitsubishi is Japan’s sixth-largest car company, selling around 1.2 million cars and commercial vehicles each year. Masuko said its future emphasis would not be on chasing volume, “which could be dangerous”, but on improving its brand image and setting “appropriate prices”.

If you could write a car plan tailor-made for the predicted market conditions of the near to medium future, the odds are it would look quite a lot like the scheme Mitsubishi chairman Osamu Masuko laid out for us in his exclusive briefing.

It makes enormous sense to major on SUVs. Such models in the small and medium sectors are booming across the world, and sales of electric and PHEV vehicles - led by Mitsubishi - have quadrupled here.

What’s more, those dealers who sell the super-successful Outlander PHEV say customers have previously owned premium models, indicating that they have very little problem with the positioning of Mitsubishi. 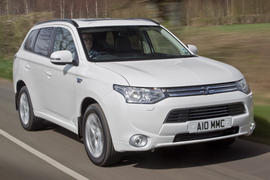 This will surely help Masuko’s ambition to improve his firm’s brand image and increase its profit per unit.

The chairman insists his major aim is not to chase extra sales volume, but it may be coming his way if his predictions come good - whether he wants it or not.

Read our review on the Mitsubishi ASX crossover

PHEV success has nothing to do with brand

And all to do with tax. There's nothing wrong with that, but interpreting people's moves from premium brands to Mitsubishi any other way would be a dangerous mistake for Mitsu. They'll have to up their perceived build quality a hell of a lot to get people to switch for any other reason.