The warranty lasts seven years, is transferable between subsequent owners if the car is sold and has an 80,000-mile maximum mileage; 20% down on Kia's.

Kia’s seven-year warranty was introduced to UK customers in 2010, meaning the first of them issued only come to an end this year. It’s likely that MG is employing the strategy to emulate Kia’s foothold on UK sales, which was aided by the first scrappage schemes in 2009.

MG already offers a six-year anti-perforation corrosion warranty, although this is optional.

The seven-year warranty covers everything on the car for the first year and the usual restrictions to wear-and-tear, serviceable items and upkeep apply.

It’ll only be available on the ZS, and MG doesn’t know if or when it’ll extend the offer to its other models; the move is at present fairly experimental and its success will spell the future of the scheme across the brand, according to MG's head of sales and marketing, Matthew Cheyne. The brand does, however, already offer a five-year warranty on its larger GS SUV.

The six-year warranty could help to attract new customers - people whose radars MG has fallen from in recent years. A scrappage scheme was also announced recently with a similar intention. Cheyne estimates that around a third of MG's sales are from customers taking advantage of the scrappage scheme, which offers £1500 off the 3 supermini.

Should the scheme be deemed successful at MG, it could spread with the introduction of each new model; the second-generation 3 is due next year, as is the new 6 saloon, with a facelifted version of the GS SUV appearing at some time after that. 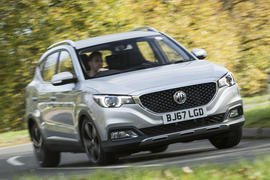 That looks like either BMW or Honda styled it.  Either way, that's ugly enough to frighten small children. 7-year warranty is great, though, and should be one very car.

Of offering such a long warranty on a car that nobody in their right mind would buy.

I hope its with a 3rd party

I hope its with a 3rd party insurer, they probably won't be around for 5 years of the warranty.

I'd rather have an original MG ZS with a K-Series engine and a three year warranty. This ugly looking SUV may as well have a SAIC badge on the front.

How is MG managing to survive in the UK?

Current MG owners could be up in arms because under scrappage, those trading in a high mileage old banger will probably get more for their part-ex than those trading in an A1 condition 2 year old low mileage Chinese MG.

I wonder how much it would

I wonder how much it would cost to buy back the MG marque?  For Cliff's sake we've got to do something to stop these abominations from besmirching the Morris Garages name.  What about a crowd-funding campaign?  I'm serious; just imagine if Alfa Romeo had been bought by a bunch of philistine Chinese people and they started afflicting the word with designs like this?

Good move but SAIC have made

Good move but SAIC have made some major mistakes with MG. Had they taken the approach Geely took with Volvo and invested in the UK workforce then they would have a vast dealer network and much better looking cars. As it is this look rubbish, which is insulting to rubbish really and I'm an MG fan!

Good move but SAIC have made some major mistakes with MG. Had they taken the approach Geely took with Volvo and invested in the UK workforce then they would have a vast dealer network and much better looking cars. As it is this look rubbish, which is insulting to rubbish really and I'm an MG fan!

Quite agree, has anyone looked at what the MG3's are going for on Autotrader. Circa £4k for a 2yr old example. Nobody is interested in them. This just looks awful. Probably would've been better just to carry on building the old Rover based cars for a while.

Stating that you are a fan of this brand and then calling this car rubbish are not in any way linked. Do you mean we should take your view more seriously because of that?.

Anyone can have a view, positive or otherwise and that is called a subjective personal opinion and NOTHING else.

What insight do you have to SAIC future plans that the rest of the car buying public do not?. How do you know that SAIC even wish to emulate Geely?.

Gather your thoughts and think them through, before you inflict them on others, or you will be rebuked for your own stupidity, yet again.