From £90,4908
Mercedes-AMG's monstrous, all-paw estate car displays all the brawn and poise of a challenger destined to dethrone the Audi RS6 - but can it?
Open gallery
Close
by Dan Prosser
8 September 2017
Share

The Mercedes-AMG E63 S Estate might well be the car to dethrone the Audi RS6 as the quintessential modern-day super-wagon.

The Audi’s appeal lies in its handsome styling, massive grip, faultless stability and enormous straight-line performance. If the AMG can add some level of agility and on-the-limit precision to that set of attributes, it’ll swiftly unseat the Ingolstadt charger and assume the role of king of the super-estates.

The booted Merc uses the same drivetrain and underpinnings as the E63 S Saloon, which is probably, all things considered, the fastest and most dynamically competent four-door there has ever been. The engine is basically the same 4-litre twin-turbo ‘hot-vee’ V8 that powers great swathes of the AMG line-up these days - although not the dry-sump unit that’s found in the AMG GT sports car - offered here in 604bhp and 627lb ft guise. Mercedes quotes a frankly absurd 0-62mph time of 3.5sec.

The E63 is four-wheel drive now, of course, but it’ll still bonfire its rear boots in three-and-a-half seconds flat if you activate Drift mode, which simply decouples the front axle and disables the driver aids. The gearbox is a nine-speed automatic, rather than a twin-clutch, but the gearshifts are every bit as quick as you need them to be, given that this is a fast estate and not a dedicated sports car. The advantage of the E63’s transmission over a twin-clutch item is that it’s smoother in auto mode and much lighter too. 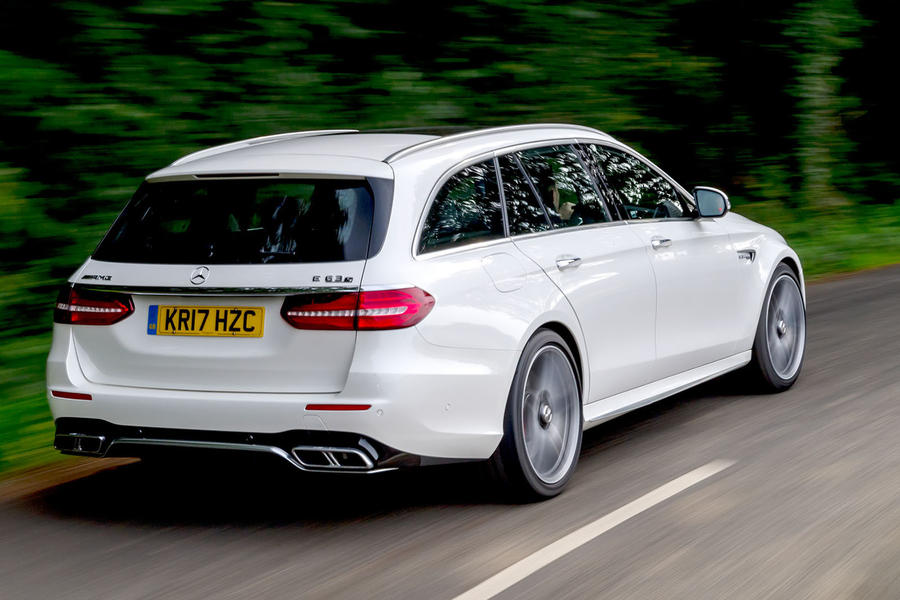 With the rear seats folded flat, the E63 S Estate presents a ballroom-like 1820 litres of storage space, but it doesn't come for free; all of that extra metal and glass add more than 100kg to the kerb weight. You have to punt the car especially hard down a narrow, winding road to identify the extra flab, but in the way the Estate takes a split second longer to haul itself from full roll in one direction to full roll the other, you can sense a degree of laziness that you don’t get in the Saloon.

But even so, high-performance estates haven't ever been as agile or as downright fast along a twisting road as this before. There’s enough sheer grip, body control, steering precision and traction that you really can cover ground at sports car baiting speeds in the E63 S Estate, but crucially it also has a level of poise and even adjustability that the RS6 doesn’t offer.

Despite its standard-fit air suspension, the AMG never rides calmly or fluidly, though. There’s a constant secondary jiggle, a busy patter than never settles. Perhaps that’s just the inevitable trade-off on a car that weighs more than two tonnes and handles as capably as this one does. It isn’t the fidgety ride that raises doubts over the Mercedes’ long-distance comfort, however, but the unyielding seats. Winged and bolstered, they look as though they’ve been lifted directly out of the GT. They’re very supportive, but they’re also very firm and, after a couple of hours, your back will almost certainly start to complain.

Those are just about the only criticisms you can level at the E63 S Estate, though. At very high speeds on a sodden German autobahn, it was indomitable and utterly sure-footed, which makes its poise and agility on a back road all the more impressive. The engine, too, is responsive, enormously powerful and eager to rev out, while the £1000 sports exhaust teases some welcome character out of the V8. 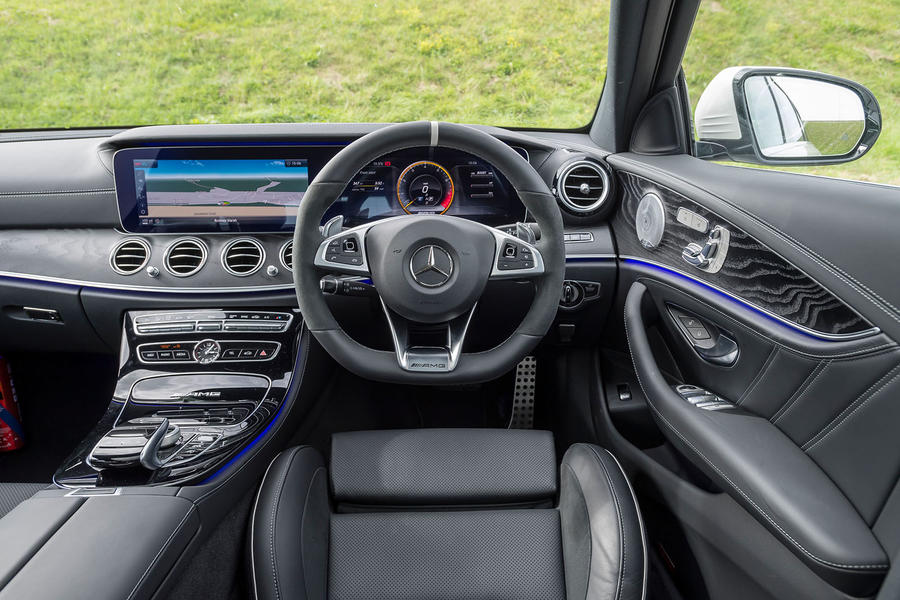 With the £2595 premium package - which includes keyless-go, a glass roof, uprated stereo and ‘intelligent’ LED lights - and a handful of other goodies, our test car came in at a little under £100,000. Which, regardless of the performance and handling ability the car has, is a staggering sum of money.

Amazingly, though, it’s par for the course in this sector these days. The Mercedes-AMG E63 S Estate might well be the king of the high-performance load luggers, but you’ll need to be somewhere in line to the throne to afford one. 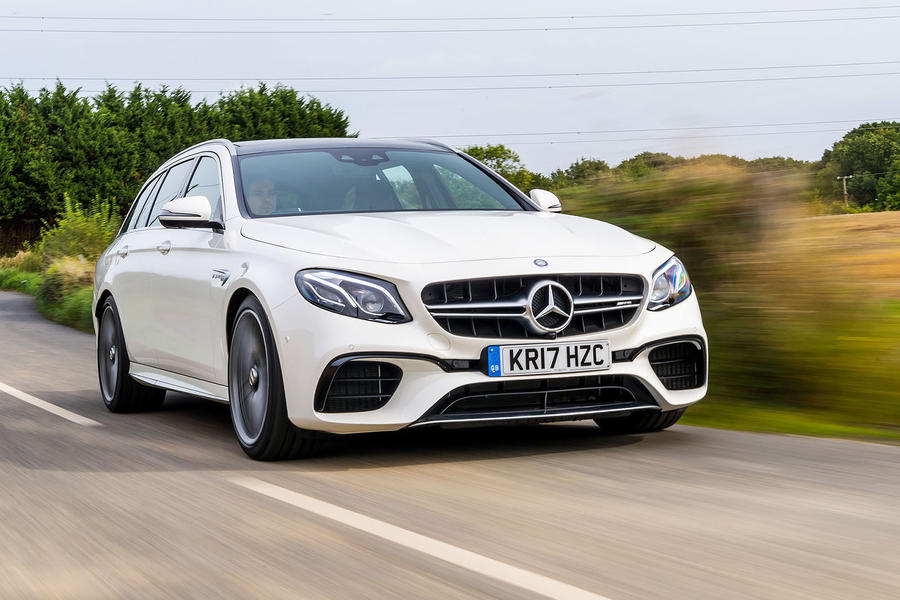 At some point reviewers and buyers will realise that the latest C and E class 63s have lazy LHD central console controls....

The older generation 212 and 204 had handed centre console switches so it's clear that they've just cost thrifted the newer versions.  Not a problem you say but with the new "mouse" in the centre it means the driver now can't see the mode, gearbox and suspension switches from the driving position but your passenger can.  Meanwhile the driver gets easy access to the start stop switch and exhaust noise selector.  Vital.

Mucho money. But only earning

Mucho money. But only earning half the price of one of these, i'm obviously not their target market. I do like a quick estate, but i feel MB are going backwards with their interiors..it's all over the place. Too many vents, lots of different textures fighting for attention, a huge wide centre console, and that boxy screen stuck on the top of the dash. It's not a pretty sight.

Can't beat a Merc V8 for the

Can't beat a Merc V8 for the sense of occasion and to put a smile on your face. Sure it's not a traditional 5/5.5/6.3 but they are full of character. It is a lot of money and I couldn't afford one but really glad this sort of car still exists!