BACK TO ALL NEWS
Currently reading: McLaren hyper-GT to be more powerful than P1
UP NEXT
Supercars to e-bikes: the story of Romans International

McLaren hyper-GT to be more powerful than P1

McLaren boss Mike Flewitt has said the firm’s upcoming hyper-GT, a three-seater homage to the F1 road car, will be a completely different proposition from the P1, its immediate predecessor in McLaren’s Ultimate Series range.

The model, codenamed BP23, will use a hybrid powertrain and be the most powerful McLaren yet when it arrives in 2019. Production will be limited to 106 units, the same number as the original F1. All 106 examples have already been sold to customers hand-picked by McLaren for their loyalty to the brand and how they use their cars.

Whereas the P1 was pitched as being the ultimate sports car, the BP23 will be all about supreme levels of on-road performance and usability, and being an “incredible road car”, according to Flewitt, rather than being designed to lap a circuit quickly. This means the suspension and aerodynamics can be optimised for covering long distances quickly and in comfort.

Talking about the differences between the P1 and the BP23, Flewitt said each Ultimate Series model would have its own unique positioning and purpose.

Despite being a three-seater, the BP23 should not be seen as a replacement for the three-seat F1, but more a homage to it. On that three-seat layout, Flewitt said lots of work had been done to make access for the driver as easy as possible. The driver’s seat will be a full-sized one and the ones either side of it will be slightly smaller but still capable of accommodating adult passengers of a certain size. 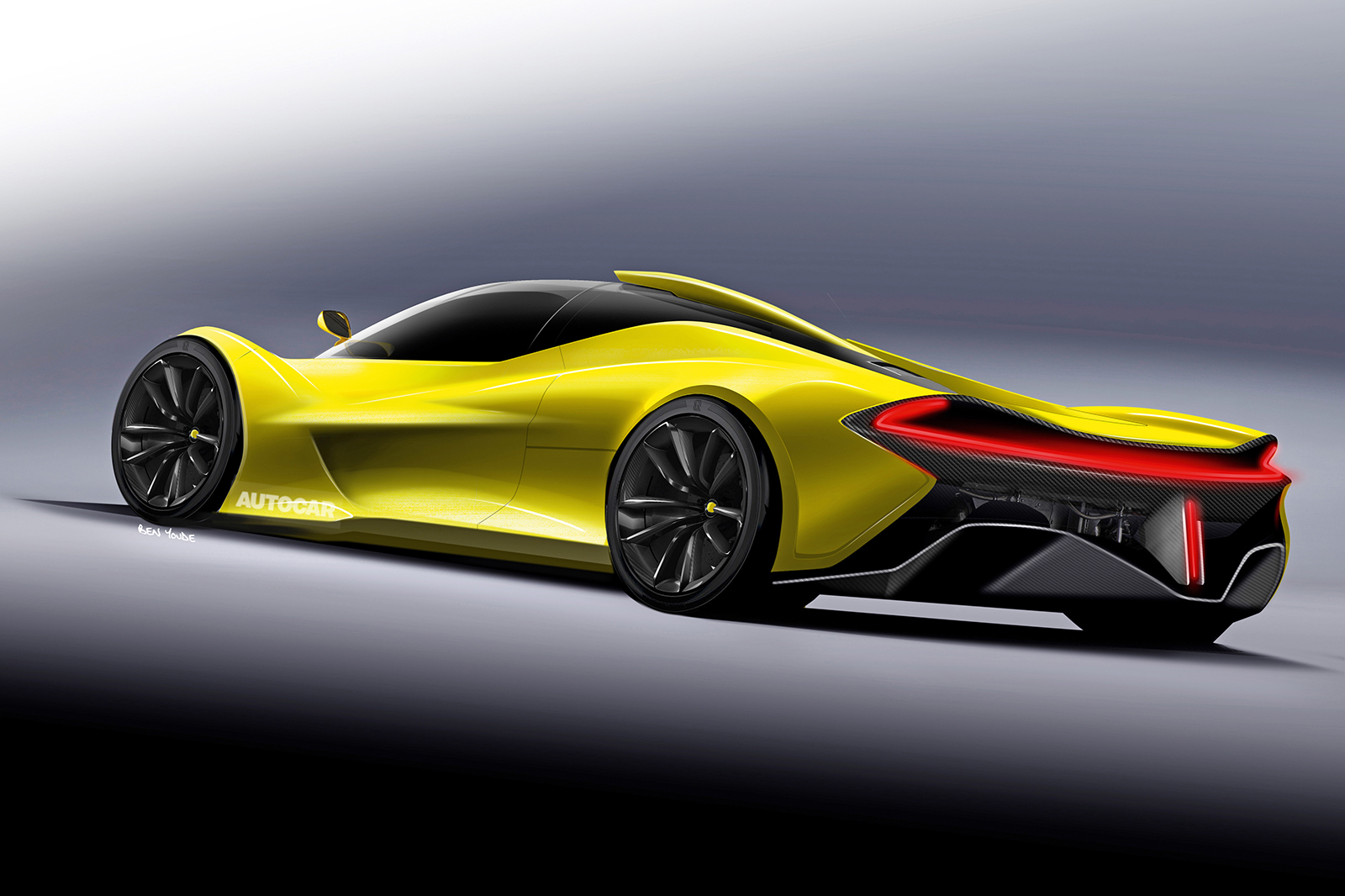 The car's carbonfibre structure will incorporate elements of the new one being developed for  production in 2020 in McLaren's new Sheffield manufacturing facility and the existing design.

McLaren has previously said the BP23 is “a car designed for long journeys but with the high levels of performance and driver engagement expected of any McLaren”.

The model is the work of the McLaren Special Operations (MSO) division, headed by  former Caterham and Zenos boss Ansar Ali. The ‘BP2’ in the codename signifies that this is the second bespoke product to come from MSO and the ‘3’ refers to its three seats.

McLaren has previously revealed a sole image of the model, an abstract bird’s-eye preview sketch. A close look at it reveals the car’s most significant feature: a three-seat layout, with a central driving position and a seat on each side of it, just as in the F1.

Owners have been told that the model will be produced as a coupé only, with no open-top or track-focused GTR variants planned. This is in keeping with McLaren’s brief to make a hyper-GT. The firm reckons a fixed roof is most befitting of an ultimate grand tourer.

McLaren has given little away about the as yet unnamed model’s powertrain, save for the fact that it is a hybrid. A version of the twin-turbo 4.0-litre V8 engine will be at its heart, but this time it will be hooked up to an electric motor and battery pack, as with the P1.

McLaren’s Track22 business plan, announced last March by Flewitt, confirmed more hybrid models as part of the 15 new cars – both regular production and limited run – it plans to launch by 2022. This F1 homage is one of those cars. 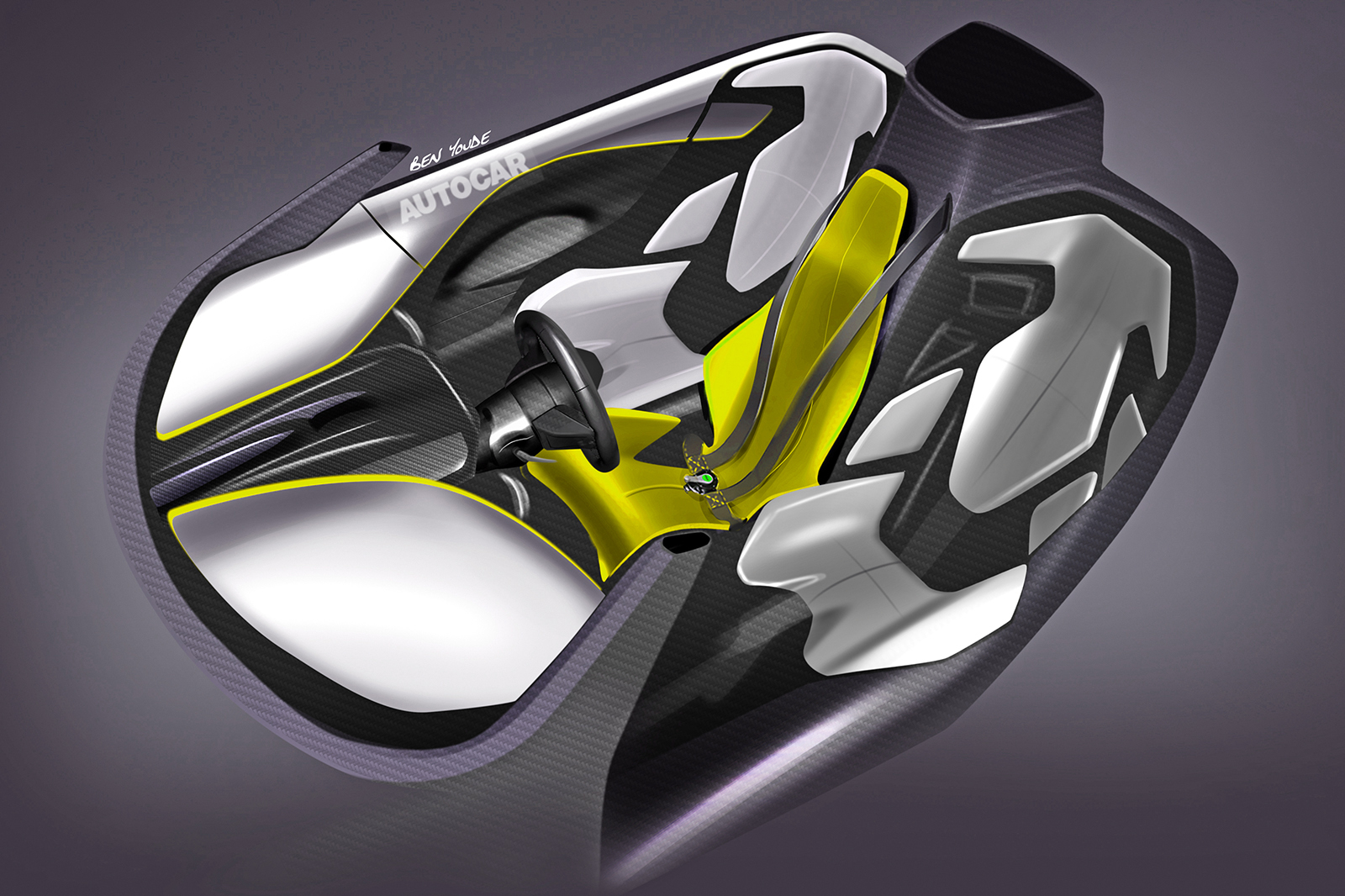 The car recognises and promotes the increasing influence of the MSO division, which offers McLaren owners anything from individual paint finishes and trims to full-blown one-off creations. It has made one bespoke product before: the X-1 of 2012.

This new F1 homage will showcase MSO’s ability to develop its own models, with insiders promising a “streamlined” exterior “shrink-wrapped in a carbonfibre body of great elegance” and an exquisitely finished interior with bespoke switchgear. Each of the 106 owners will work with MSO to create bespoke colour, trim and personalisation combinations for their individual cars.

McLaren has given little away about the styling of the car, but it has revealed that its dihedral doors, a feature of all McLaren Automotive models to date, will be powered for the first time and extend into the roof, as on the F1. Sources have revealed that there will be other nods to the F1 in the styling, with a roof-mounted air scoop among the features.

Performance will be explosive, but McLaren will also focus on making the F1 homage its most refined car yet. A McLaren statement read: “The car will deliver the highest levels of refinement, enabling significant journeys to be undertaken with up to three people aboard.”

McLaren has not yet confirmed pricing, but sources have indicated that the new car will cost around £2 million when it arrives in early 2019.

Another investment item that some car reporters will fawn over with banal words like "wow, it's so fast", "oh my god it goes around corners so well", maybe do a few useless drifts. It's so predictable and boring.
jmd67 8 March 2017

If the lights in the new 720 looked as good as these there wouldn't be anywhere near as much moaning...
scrap 16 November 2016

Wow, the cats are out tonight

Wow, the cats are out tonight. Taking time off from slut shaming some celebrity because a photographer snapped a slight wardrobe malfunction? Honestly, it's silly. The Autocar rendering is just a sketch and hasn't been updated since McLaren released their image - and there's not much to go on anyhow. We will see the real thing soon enough.
View all comments (8)