BACK TO ALL NEWS
Currently reading: McLaren P14: 650S replacement spotted with 3.8-litre V8
UP NEXT
Hidden gems: A peak behind the scenes at Beaulieu

Known internally as the P14, McLaren's 650S successor will arrive next year with even more extreme styling than that of the P1 hypercar
Open gallery
Close

A McLaren P14 development car has been spotted by YouTube user Petrol Ped (video below).

The P14, as it is known internally by McLaren, will eventually replace the 650S. It is due for arrival at the 2017 Geneva motor show.

Insurance database information for this latest development car suggests the production model will retain a 3.8-litre V8 engine like that its predecessor. At 2min 55sec into the video the car's distinctive exhaust note can be heard.

This latest sighting, near Chichester, follows an earlier sighting made by our spy photographer in southern Europe and another by Dutch website Auto Wereld.

Despite the camouflage, the design of the P14 clearly takes influence from the P1 hypercar, but the brand's McLaren logo-inspired headlights seem to be gone in favour of more conventional units fitted with ultra-powerful LEDs.

The new car forms part of the British manufacturer’s commitment to launch a new model every year, including hybrid models.

The P14 will use McLaren’s carbonfibre tub - albeit in its latest form - and its power output will be extended beyond the 641bhp of the 650S. 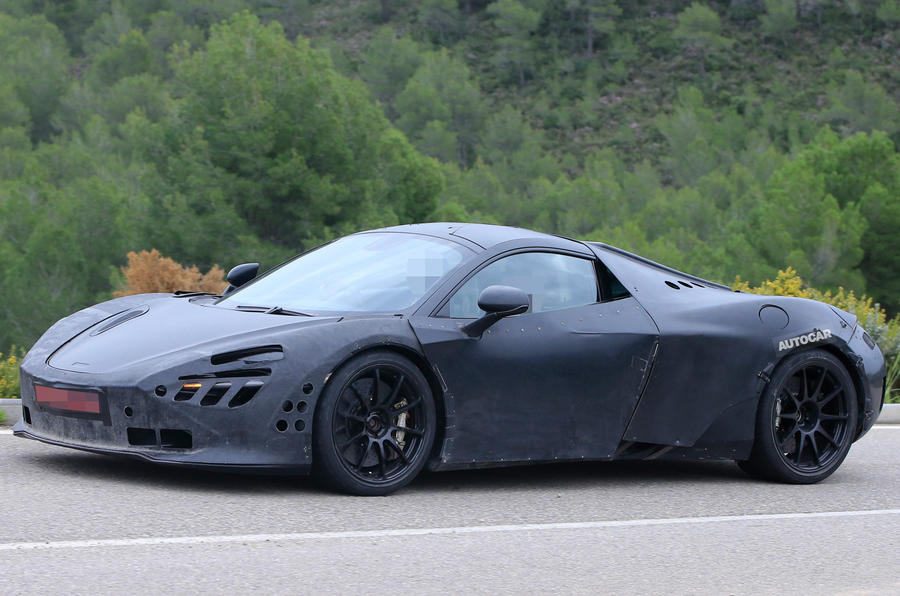 Peak power of 660bhp would that of the match the P14’s closest current rival, the Ferrari 488 GTB, and still allow the 675LT to top McLaren’s Super Series range. However, because the 675LT is limited to just 500 units, McLaren may also choose to surpass that car’s 666bhp output.

To beat the Ferrari, McLaren will have to ensure the P14 can reach 62mph from rest in less than three seconds and hit a top speed in excess of 205mph.

While the P14’s styling has similarities to other McLaren models, it represents a big shift from the company's recent products and will set the design template for its next batch of models.

Autocar has previously contacted McLaren for comment on the sightings, and the Woking firm denied it was a P14, instead saying: "This is a prototype mule that’s being used for the testing and development of new technology."

However, our sources remain convinced this is a P14 prototype.

McLaren design director Frank Stephenson has already said the P14 will be “even crazier” than the P1 hypercar. The company’s established hallmarks, such as the distinctive side-mounted air intakes and front bumper design, look to have been ditched for a new design.

An open-top variant is also planned and, like today’s 650S Spider, it will feature a folding hard-top roof. Although the 650S Spider was launched at the Geneva motor show in 2014 alongside the 650S coupé, McLaren’s current launch strategy means the convertible P14 is likely to be seen around a year after the coupé goes on sale.

So do we assume someone else

So do we assume someone else was driving him around in the Mini while he was recording the movie and taking photos?!

I can't believe it has been

I can't believe it has been spotted running a 3.8 litre engine. Who would have thought!?!
Bob Cholmondeley 31 October 2016

So many "knowing" comments,

So many "knowing" comments, so little knowledge. I'm sure both McLaren and the people who buy their cars, couldn't care less what you think they should be building.
Bullfinch 1 November 2016

So many "knowing" comments, so little knowledge. I'm sure both McLaren and the people who buy their cars, couldn't care less what you think they should be building.

How can you be sure of that, or is this another of those 'knowing' comment based on very little knowledge that one finds on the internet?