BACK TO ALL NEWS
Currently reading: Maserati confirms 13 new models as part of bold brand relaunch
UP NEXT
Tesla to expand select UK Superchargers to other electric vehicles

Maserati has outlined its bold revival plan, with 13 new models - including battery electric variants of each -  due by the end of 2024 as the firm seeks to re-establish itself as a luxury sports car brand.

The revival plan began with the launch of the new MC20 supercar, which will serve as a halo model for the long-running Italian brand. Launched with a 621bhp twin-turbo V6 engine, the model will also gain a full electric variant in 2022, and every Maserati launched from now on will feature an electrified version.

Maserati’s fully electric models will start to arrive in 2022 and will all be branded Folgore, meaning thunderbolt in Italian. All the EVs will have a three-motor set-up, with one motor on the front axle and two on the rear. That will enable all-wheel-drive and torque vectoring, with power able to be adjusted to each axle depending on traction.

The EV system will use 800V technology enabling charging rates of up to 300kW, with silicon carbide inverters. Used in Formula 1 and Formula E powertrains, Maserati claims it will allow for more efficient running and longer range. 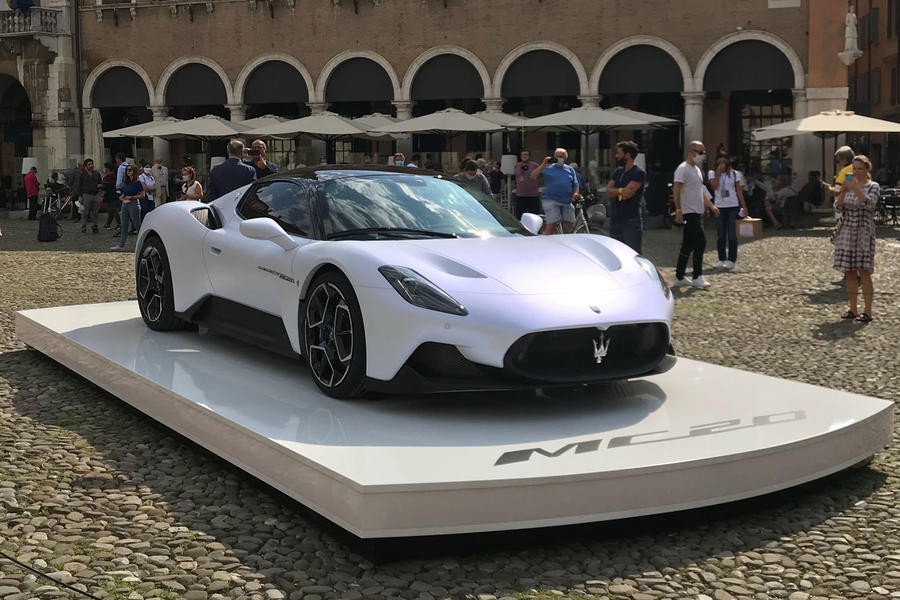 The model blitz will begin when the V6 MC20 goes on sale next year. It will be followed by the firm’s new small Grecale SUV, based heavily on sister firm Alfa Romeo’s Stelvio.

The new GranTurismo and GranCabrio will also launch next year, with the full electric versions of both coming in 2022. They will be engineered in Modena and built at the company's Turin production plant.

The electric versions of the MC20 and Grecale SUV will also arrive that year.

By 2023, an all-new Quattroporte will arrive with combustion and full electric variants. It will be followed by the next-generation Levante SUV, again with both combustion and EV powertrains.

The company expects SUVs to make up to 70% of sales by 2025, at which point it will offer an electrified version of every one of its models. By 2025, the average age of its line-up should be less than two years old.

Maserati also plans to expand its customisation options through a new Fuoriserie programme, which will see a new "car tailoring" shop created at its Modena headquarters. Customers will be able to hand-craft their cars from a choice of three basic collections, across the entire model range.

Echos from the past

I am sure we have heard this before from Maserati and others (Lotus), I just don't think some of it is realistic- the whole range is old and behind competitors, build quality and reliability is behind rivals and on top of that there is a price premium that really relies on the brand heritage than current product. Reskinning Alfa SUV's and charging 50k for it has been tried and failed.

The EV switch is something in the next years ALL manufacturers are going to HAVE to do so I don't think it's as much as a game changer anymore.

Although I agree that this is what we have heard over and over again, especially from those like Maserati, I am hopeful of such a revival being successful. Both Alfa and Maserati came out with the Stelvio and Levante and neither have achieved the sales they had hoped for even though for the most part the models have been fairly well received. However, these models have shown that Maserati and Alfa are capable of producing decent quality vehicles and so it may lead to a shift in perception about the brand. I am all for the new MC20 and should it prove to be a good drivers car it could really help the brand return to its former glory.

There can also be an case made for the fact that Maserati's branding really works in places like Asia and with new SUVs and EVs they could really be onto something. I will say that FCA have so far lagged behind when its come to EV adoption with Marchionne even stating his dislike for the original Fiat 500e and now it seems they are playing catch up but almost seem wary of doing so by producing ICE and EV versions of each vehicle rather than stand alone EVs.