BACK TO ALL NEWS
Currently reading: LEVC boss pleads for government to retain plug-in grant
UP NEXT
Exclusive: Aston Martin seeks funds to safeguard its future

The boss of taxi-maker LEVC has called for the UK government to retain the grant for plug-in vehicles, as he announced plans for a significant expansion of his company.

Joerg Hofmann told Autocar that the grant is scheduled to expire in six weeks, but that it is vital in ramping up sales of plug-in vehicles. Buyers of LEVC’s range-extender taxi benefit from a grant of as much as £7500 when buying a top-of-the-range £59,000 TX5 cab.

The grant is also seen as vital for LEVC’s expansion plans, which should see the Coventry factory’s output expand from 2500 units in 2019 to the plant's capacity of 20,000 units annually, by the end of 2022.

Key to this huge expansion is the new LEVC range-extender van, which goes on sale in October.

‘We are transforming from a niche taxi builder to competing in the commercial vehicle market’ Hofmann told Autocar. ‘We will be competing in the 1 tonne van market, which is worth 600,000 sales across Europe annually, though this may rise to as many as 1 million over the coming years’ he said.

‘At the moment this market is 99% diesel, but our new van will be a viable low-emissions vehicle for the majority of logistics companies. We call this market “distribution to door”. Hofmann says conventional EV vans cannot compete in this market because they are so limited on range.

The TX van, however, gets 80 miles from its 31kWh battery and has a three-cylinder petrol range extender for a total range of around 400 miles. Like the new London cab, it’s expected that users will employ the range-extender while travelling from logistics bases, deploying the battery when they reach the city centre. Hofmann also revealed that the new van should be ‘notably’ cheaper to buy than the TX cab.

Using figures from existing TX cab owners, LEVC estimates a saving of at least £100 per week on fuel compared to a conventional diesel van, and says that a lease cost of around £180 per week is entirely feasible. The cab has an official CO2 rating of just 20g/km; LEVC claims the taxis it has sold so far (which have covered a total of 95 million miles to date) have allowed a reduction in CO2 of 30,000 tonnes over the equivalent diesel taxis, along with a 99.5% reduction in NOx emissions. 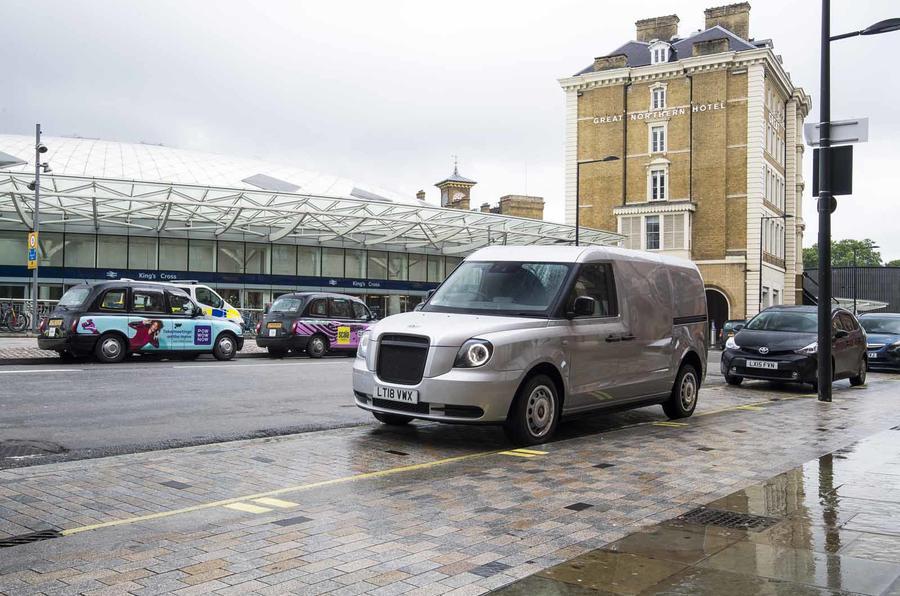 When the TX van is in full production, it is expected to account for 14,000 of the annual 20,000-unit factory capacity. LEVC has also opened an export office in Frankfurt and says it has had interest from Japan, the Middle East, Australia and other global markets. The company is also set to recruit an extra 100 people this year.

Hofmann also gave an insight into the difficulty of making a business case for plug-in vehicles. He told Autocar that the 31kWh battery - which is sourced from LG in Korea - amounts to nearly 30% of the cost of the whole vehicle.

He hinted that LEVC profit margins were ‘very tight’ at the moment due to the cost of battery technology. However, it seems that the UK government is actively working on supporting a big expansion of battery design and manufacturing in the UK.

The Coronavirus outbreak has not yet affected LEVC production, but Hofmann said that supplies from China were currently only certain for two weeks. The supply of components to the TX line can be split by value: 40% UK, 30% EU and 30% Rest of the World, Hofmann said.

He also cautioned the Government that the UK automotive industry desperately needed a a trade deal with the EU that was tariff-free. ‘Without that we are in trouble, it’s a big problem for all the industry. An FTA [Free Trade Agreement] with no tariffs means we will be fine’.

Thing is the Goverment has plans to ban all ICE PHEVs in 15 years or so, in which case it'll look pretty stupid giving cash grants to aid development/spread of PHEV's

I see no reason why the Government couldn't keep the grant going, provided the vehicle was for business use only. A/ Businesses need encouragement to go electric, B/We all benefit from having electric transport and deliveries as the vehicles have to be working to pay their way. Win/Win. Grants for private cars is just shovelling money into consumers' and Lease Plan Lenders' pockets.

We need to be supporting

We need to be supporting these guys. The product looks good, they are trying to innovate in a key market sector.