BACK TO ALL NEWS
Currently reading: Lamborghini to launch four-seat EV crossover and electric Urus
UP NEXT
2025 Volkswagen ID 1 is Spanish-built, £17,000 entry EV

Lamborghini's first electric car will be an all-new four-seat crossover, launching in 2028, followed by the all-electric second-generation Urus SUV.

It was already known that Lamborghini was plotting a 2+2 seating configuration for its first EV, but now CEO Stephan Winkelmann has given more details on its positioning, which will be radically different to that of any model the brand has launched before.

Speaking exclusively to Autocar, he said: "When it comes to the first full-electric car, it's clear that our approach is clear and prudent.

"Clear because we say: 'Yes, electrification is part of our future'. And prudent because we say: 'It's a completely new car: the fourth model. It's a segment we haven't been in for decades, if we speak about a 2+2 or four-seater, maybe also high from the ground, with more ground clearance.'"

Winkelmann's comments suggest Lamborghini's first EV will be similar in its positioning to that of sibling brand Bentley, which will also sit higher from the ground than a conventional saloon or grand tourer.

"There will be more ground clearance than a normal car, that's the idea, but there isn't a clear decision taken so far, and therefore it's a bit early to discuss this in depth."

The last 2+2 GT that Lamborghini produced was the Urraco, which bowed out in 1979. The only cars with more than two seats produced since then are the 1980s LM002 and modern Urus SUVs.

Development of the first EV will get under way later this year, Winkelmann said, once the initial concept has been signed off.

"It's advancing in the sense that we're deciding this year what type of car this is going to be, and not only volumes, pricing and body style, but also much more on the content of the car," he said. "If everything goes accordingly, we're going to kick off the project by the end of this year".

He remained tight-lipped on what Lamborghini has planned in terms of its EV's technical make-up, reiterating his previous comment that Lamborghini can choose what to "make or buy" in terms of platform, battery and motor technology.

He said: "Making is important for the DNA of the brand. It's clear the car has to be a real Lamborghini. But on the other hand, there's no manufacturer who does everything in-house, so we have the chance to buy inside the group or outside the group. This is a big advantage we have."

Bentley's first EV will use the premium-oriented Artemis platform currently in development at parent firm Audi for use initially by the all-electric A8 successor due in 2024. It's possible that Lamborghini could seek to reduce development times and costs by using the same architecture.

Following the launch of this four-seat crossover, the larger Urus SUV will go all-electric for its second-generation. "After the hybrid car, the Urus will be fully electrified," Winkelmann confirmed, adding that it will be "a completely new car" in its next generation, with no plans for a combustion-engine offering.

This all-electric Mk2 Urus is likely to arrive in 2029, but it's not clear if the current model, which will be updated next year and hybridised the year after that, will remain on sale until then. 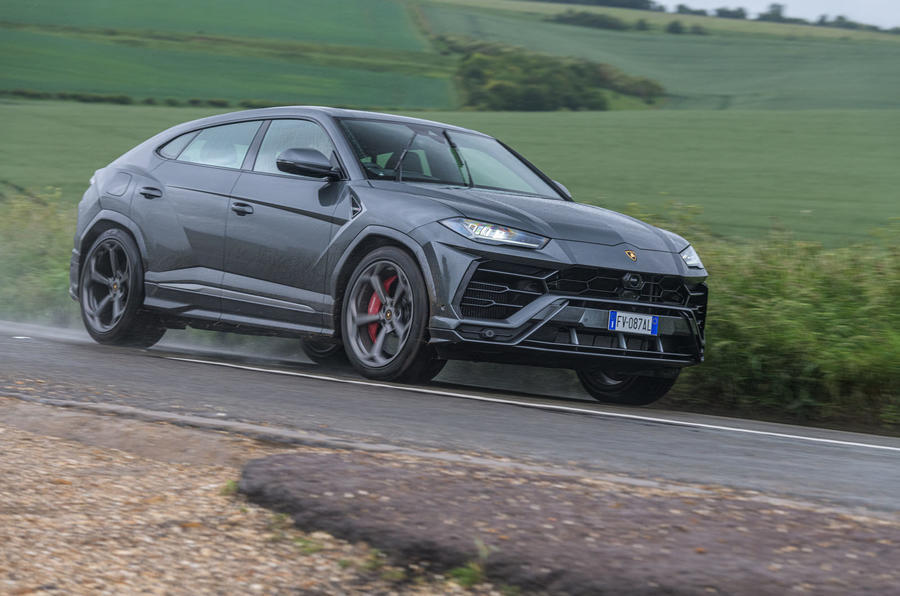 Winkelmann suggested that opting for a more mainstream-friendly crossover positioning for Lamborghini's first EV will make it easier for the brand to maintain its enthusiast appeal in other segments.

"At the end of the day," he said, "it's a more versatile car than the Urus so less affected by the purist approach of Lamborghini, which we have in the super-sports car business."

Lamborghini remains committed to its supercar offering and will usher in hybridised successors to the Aventador and Huracán in the next two years.

Winkelmann suggested there may even be a means of sustaining their combustion engines in the longer term, too: "We don't know what is going to happen after that. It could be that for the super-sports car business, we have an extended period of hybridisation if this is allowed by homologation, sustainability rules and maybe by synthetic fuels. This is a door we're leaving open so far."

Log in or register to post comments
Andrew1 25 January 2022
So, essentially, Lambo will follow Porsche or Aston and become an SUV manufacturer.
When I was a kid I had posters on the wall with sports cars. Porsche, Ferrari, Lambo and others meant sports cars.
Will our children have posters with
Lamborghini SUVs? I think not. Moreover, I think, for them, the brand will be just some fast, ugly, expensive and useless SUV.
eseaton 25 January 2022
You boys really know how to ruin my day.

You think it's possible Lamborghini will use a shared VW group architecture for this car, Autocar?

Its not possible, it's a certainty.

Absolutely. The Urus and the Huracan use shared platforms now. Now we can expect an electric-crossover-shared-corporate-platform "Lamborghini." The only part of this article that doesn't make me sad is the last paragraph. To be clear, I'm not anti-EV, I'm anti-ONLY-EV.

Well, it's likely if only because VW supervisory board voted in late 2020 not to sell off Bentley, Ducati, or Lamborghini - for now, at least. There had been rumours that VW was thinking about off-loading some brands that were not going to mesh with or suit electrifiication or autonomoius driving. Bugatti was in the same position but a solution was found with Rimac.

That said, I get a sense that Porsche is the leader of the pack for VW's electriification of its luxury brands. It is further on with BEVs than, say, Bentley and Lamborghini. As we get to 2030 and beyondm, Lamborghini might no longer have the most powerful cars in VW's group - it will probably be Porsche and "Rimac/Bugatti" (Porsche and Rimac own the joint venture - 45/55 split).