Refreshed supercar drives like a raging bull and, with its doors up, looks like one. We ask whether it has the finesse to match its ferocity
Share
Open gallery
Close
Share story
News
by Dan Prosser
7 mins read

Give me a biro and a sheet of A4 paper and I’ll fill the page with ways in which the Lamborghini Aventador S could be improved.

But nowhere on that list will you see anything to do with electric motors, stacks of batteries, regenerative braking or 15 miles of electric range. None of those things would make the big Lamborghini any more thrilling to drive and that, I reckon, is all that really matters.

From start to finish, the Aventador experience is a very special one. When you see it parked on the side of the road, it looks too low to accommodate human beings and too wide to fit down a residential street. It’s just so mean; almost hostile. 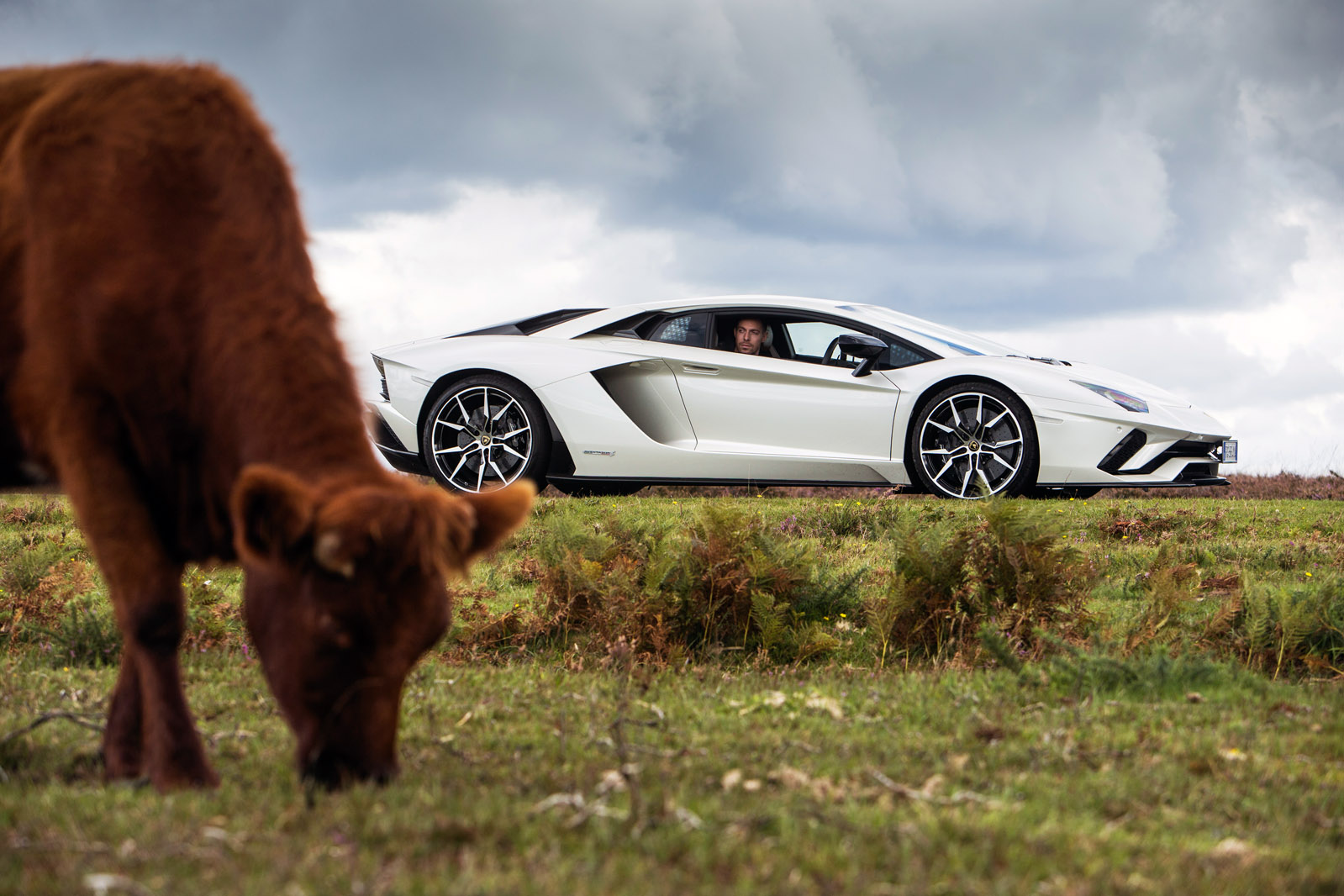 Then you open the doors and they rise upwards like great horns and the cabin, modelled on a fighter jet’s cockpit, is purposeful. You drop into the seat and pull the steering wheel all the way out towards your chest and realise the base of the windscreen stretches even further forward than the tips of your toes. The Aventador makes its stablemate, the Huracán, or even a Ferrari 488 GTB, feel completely pedestrian.

Which raises an interesting question: if the 488 and Huracán are supercars, should we consider the faster, more expensive Aventador a hypercar? The styling and sense of occasion are of that order, certainly, and it has more than 700bhp. It also has some fast car hardware that’s straight out of the hypercar toolbox, including a carbonfibre tub and inboard suspension. The Aventador gets the same reaction out on the road as a McLaren P1 or Porsche 918 Spyder, too: you see the same gawps and the same frantic pocket shuffle as suited businessmen and excitable schoolboys alike reach for their cameraphones.

It’s a long way from having a £1 million price tag, though, coming in at £271,146, and it isn’t limited to a few hundred units. Perhaps hypercar is a stretch, but the Aventador definitely occupies a middle ground between the series production supercars and the ultra-exclusive, mega-expensive hypercars. 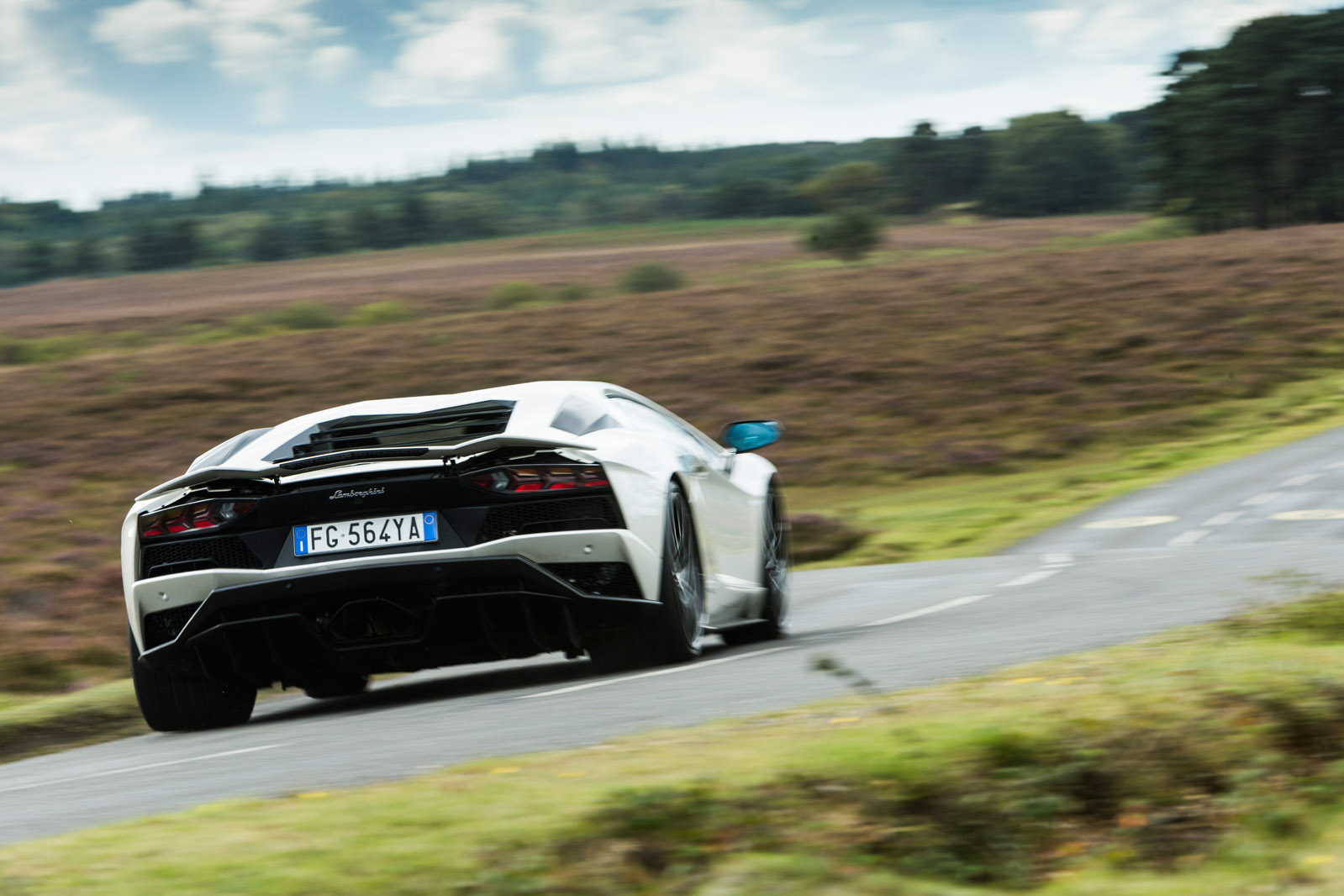 The Aventador S is the updated version of Lamborghini’s heavy-hitting, mid-engined V12. The good people at Sant’Agata kept us waiting – the Aventador saw its sixth birthday come and go before it was facelifted or tweaked in any meaningful way. A glance at the list of updates suggests the wait will have been worth it, though. You’ll pick out the new model by the ‘fangs’ in the front bumper and the restyled rear end, which swaps body-coloured trim for black cladding. The rear arches have been reprofiled, too, and now mimic the swept-back shape of the Countach’s wheel wells. Overall, the exterior shape hasn’t really changed too significantly, and yet the Aventador still looks so arresting after all these years. That’s a testament to the original design.

The cabin is largely as it was, so it’s still an evocative place to sit in, with its acres of dashboard and the pillbox view forward. I can get on board with the slightly silly flip-up trigger guard over the engine start button (it probably wouldn’t work as a design feature in a Golf) and the row of toggle switches. But the over-stylised buttons and some of the infotainment graphics look horribly dated. The seats are pretty poor, too; you perch on top of, rather than sink into, them. After four or five hours on the road, your neck muscles will begin to twitch.

While the exterior styling and the cabin don’t suggest very much has changed, the extent of the updates beneath the skin means the Aventador S is less a facelift model and more the next generation entirely. 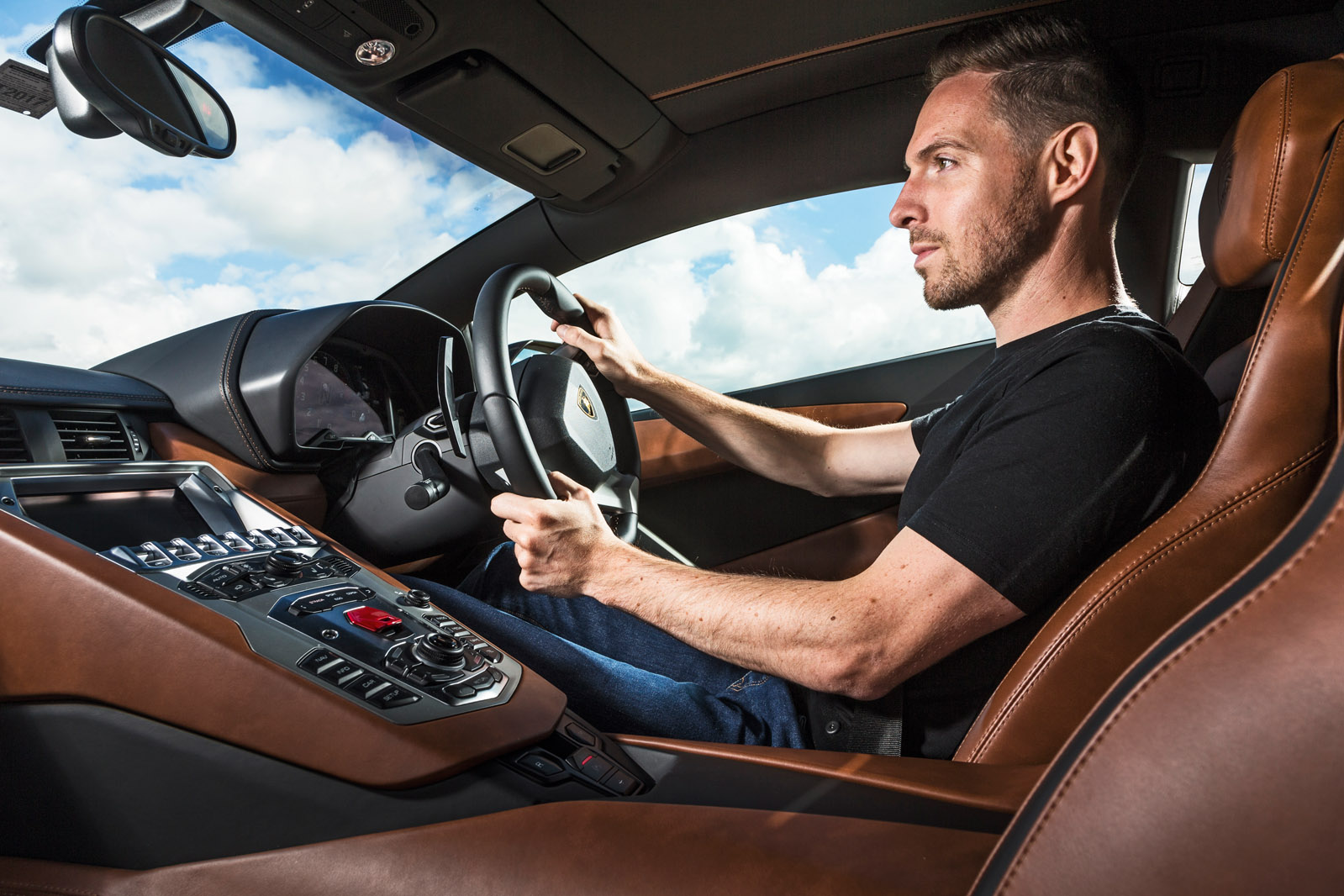 Lamborghini has finally given in and added a customisable driving mode, which allows you to choose how racy you want the car’s various parameters to be. You can now marry the slack, unwound dampers to the headbanging engine and gearbox settings, for instance. They’ve called it Ego mode, which probably sounds good in Italian (it simply alludes to the individual), but in English just sounds a bit daft.

Perhaps the most significant update, though, is the new four-wheel-steering system. Lamborghini will tell you it virtually shortens the wheelbase at low speeds to make the car more agile and virtually lengthens it at higher speeds to make the car more stable – which is true, but reductive. What it really does is make the rear end much more secure in all types of driving and at all speeds, which means the chassis engineers had been let off the leash. They’ve been able to make the steering more direct and the four-wheel-drive system can now favour the rear end much more often. Those measures might just make the hitherto flat-footed Aventador feel a bit more athletic.

What Lamborghini hasn’t done, of course, is fit any sort of electric powertrain. Frankly, if there isn’t space in the cockpit for a drinks holder, there probably isn’t space elsewhere for a pile of batteries and a motor. Even if there were, I can’t believe that adding a couple of hundred kilos to a car that already weighs 300kg more at the kerb than a McLaren 720S would in any way improve the driving experience. 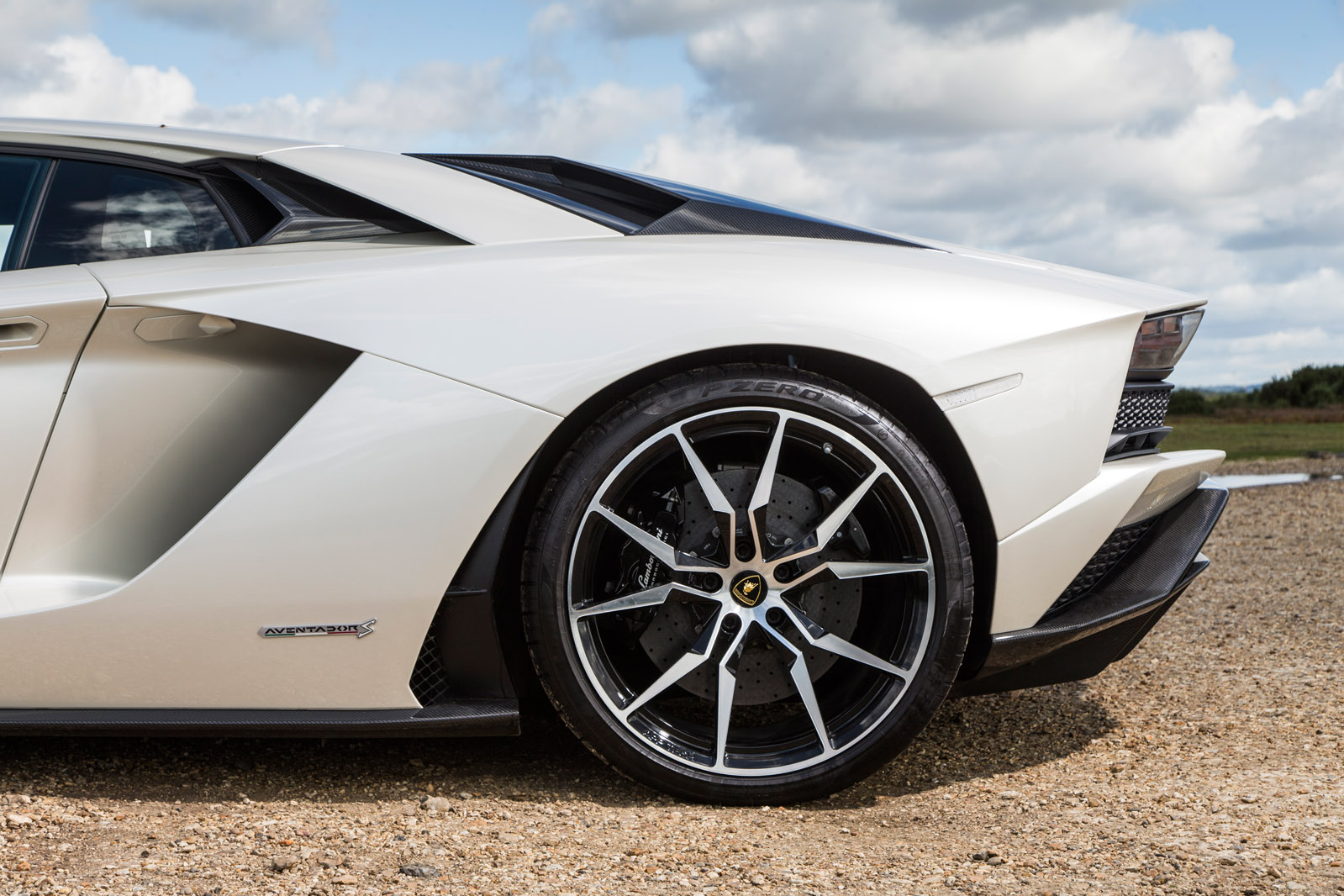 A punchy electric motor could probably offset the extra weight of the batteries that feed it and make the car faster in a straight line, but the whole lot would make the car feel even heftier in its boots in cornering. And it’s not as though the 6.5-litre V12 is turbocharged and has a response problem that an electric motor could disguise – this engine is ferociously responsive and immediate as it is. In fact, propping up the lower end of the torque curve with a motor would make the entire drivetrain less exciting, because you wouldn’t have to get after the 8500rpm redline so often. Yep, my mind is made up on this: many cars could be improved by fitting a hybrid powertrain, but this isn’t one of them.

The big Lambo does need many other things, though. Such as seats that are actually designed to accommodate upright bipeds and a gearbox that can swap cogs at low speed in auto mode without scratching its head for a second or two and change up a ratio in full-attack manual mode without dislodging your spinal cord.

Now rated at 730bhp – 40bhp more than the previous version – the howling V12 probably doesn’t have a great deal left in reserve. That means the Aventador will never be much quicker than it is now but, frankly, it doesn’t need to be. This car doesn’t have a power problem; it has a weight problem. It tips the scales at 1575kg dry, which means somewhere in the region of 1700kg as you drive it. For a carbonfibre-tubbed car, that really is far too heavy. 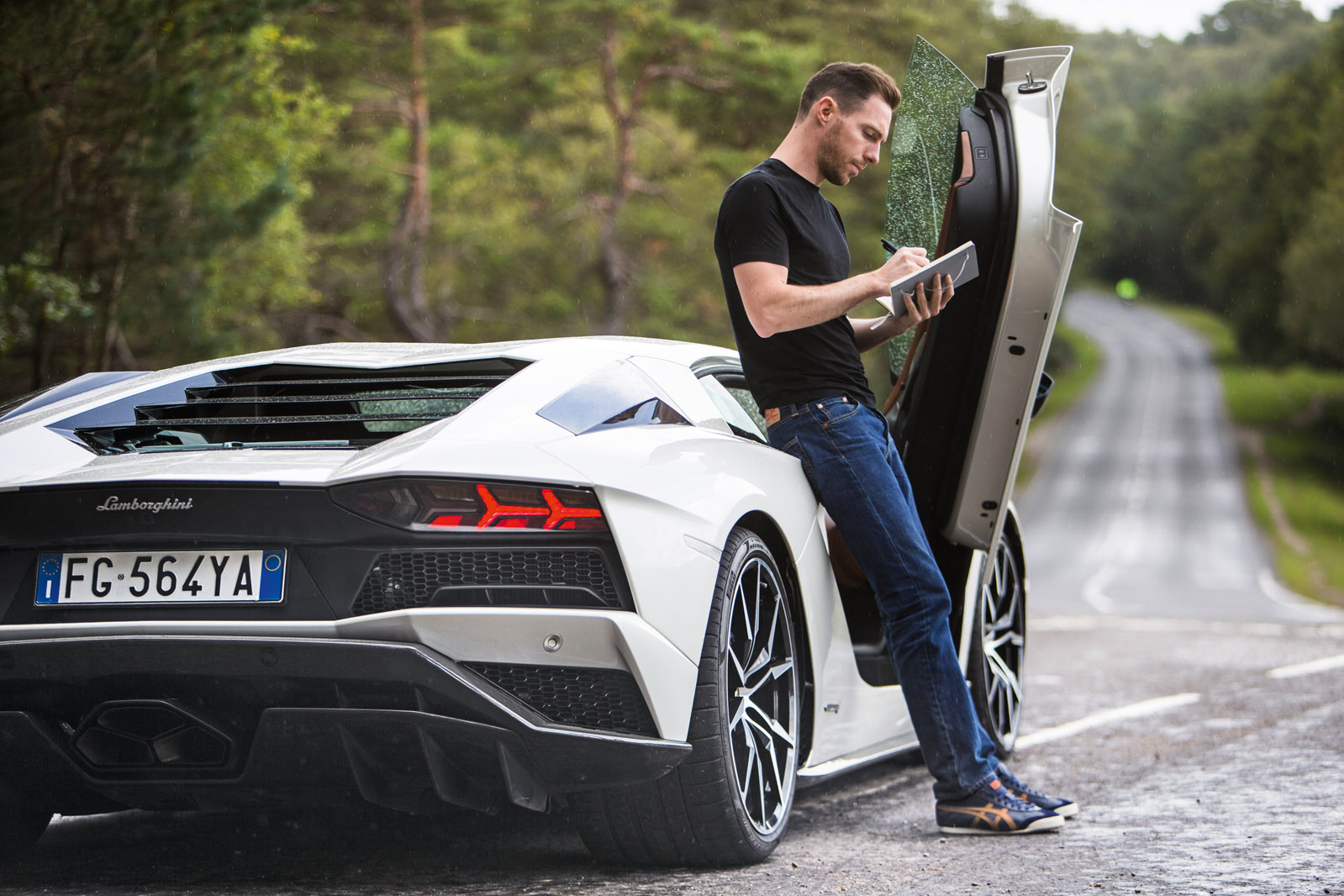 It shows in the way the car finds its way along a tight, winding road. With the revisions Lamborghini has made, the S is far and away the most nimble and best-balanced Aventador so far, but there’s no getting away from the fact that it weighs as much as it does and takes up so much space on the road. Your confidence builds slowly in the Aventador. Just when you think you’re getting on top of it and finding the limit of mechanical grip, something will happen – it’ll start raining or a van will come the other way and you’ll breathe in involuntarily to try to make the car a little narrower, or the throttle will stick open for a split second after you lift off into a bend and fire you a little too close to the grass verge – and you’ll be back to square one. Compared with a 488 or a 720S, both of which fill you with confidence and draw you in, the Aventador S, improved though it is, always keeps you at arm’s length.

I suppose the lasting frustration with this car is that it makes such a fantastic first impression – with the way it looks, the brilliance of its engine, its otherworldly sense of occasion – but it doesn’t back that up with a really rewarding driving experience. This is a car that needs many things, not least a smaller footprint, less weight and a transmission that wasn’t first mooted when Ferruccio Lamborghini was a boy; but a hefty stack of batteries, a motor and yet more straight-line performance would do nothing to make it a better car to drive. 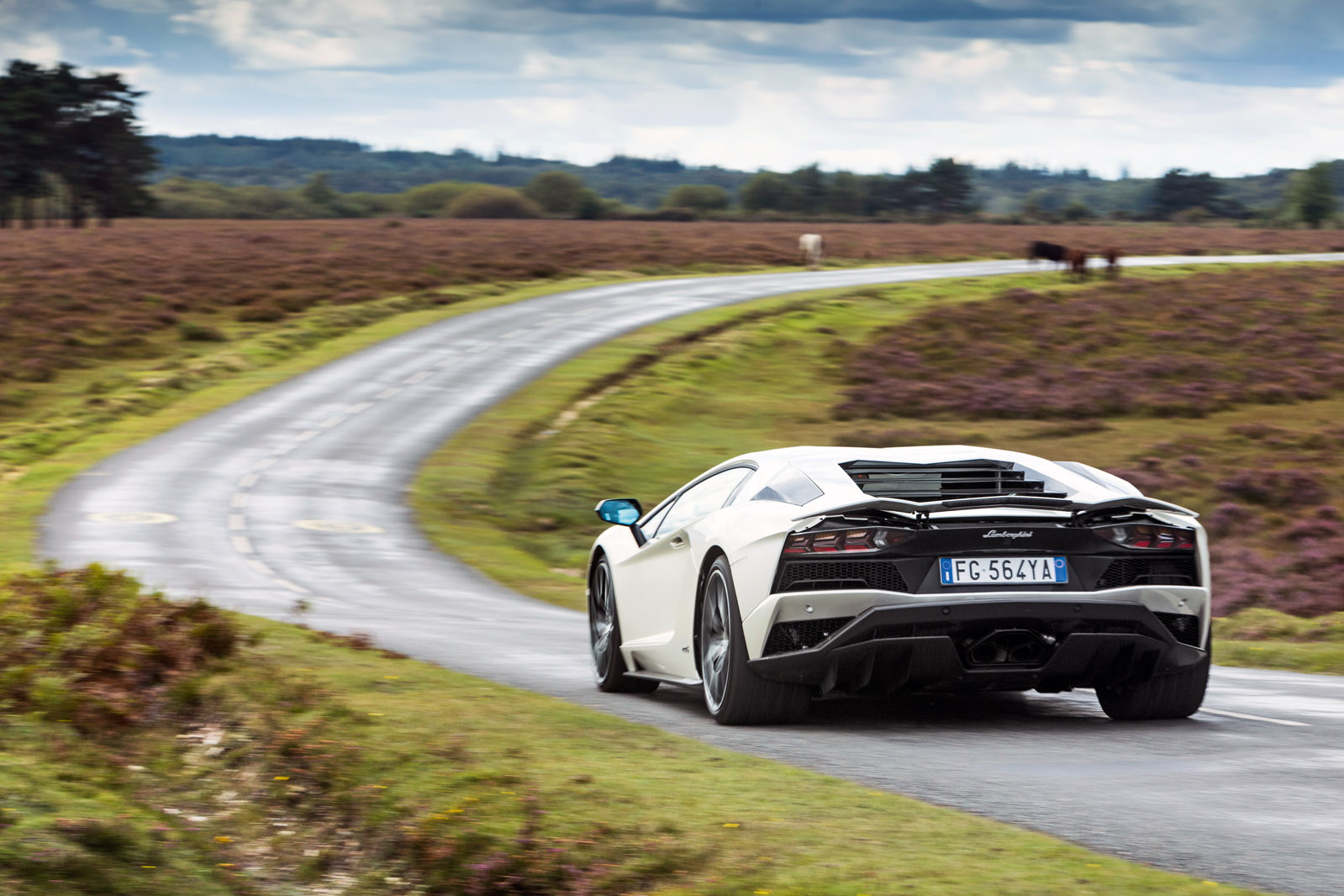 Porsche 911 GT2 RS - the first electrified 911 isn’t far away, but the most extreme model yet from Porsche’s famed Motorsport arm does without any sort of hybrid power, thank you very much. A mighty 690bhp deployed through the rear wheels suggests the new GT2 RS could be the most fearsome 911 ever.

Noble M600 - Leicestershire’s very own Ferrari chaser uses a thumping 662bhp twin-turbo V8, but it isn’t the M600’s engine that leaves a lasting impression. Remarkably enough, its chassis is so brilliant that you’re actually more impressed by its ride and handling balance than its staggering straight-line speed.

Ford GT - Like the Aventador S, the Ford GT uses a carbonfibre tub and racing-car-style inboard suspension, but it has just about half of the Lamborghini’s engine. The 3.5-litre V6 is boosted by two turbos, though, and with much less weight to shift, the 647bhp GT outruns the Italian car.

V12 still cuts the mustard as a supercar.

Sounds so much better than flat plane V8's. Looks amazing.

Having said all that my dream money wouldnt go on this.....Countach 5000 QV please!

A normally aspirated V12 is

14 October 2017
A normally aspirated V12 is much much more desirable and beautiful than a boring flat plane crank V8 with turbos and batteries, completely irrespective of performance.

This is just more exciting and lovely.

The massive engine may and the necessary beafy ancillaries are probably high percentage of that weight problem -- half the cylinder count, half the displacement etc. and the car probably could be designed at least 300kg. lighter as well as smaller in dimensions.

Wonderful motor. Looks slightly out of place next to that cow though...

Gotta love the Autocar. Nitpicking the Aventdador, whilst waxing lyrical about the P1!

Well, I for one, would go for the Aventador every time. The looks, the engine and the sheer drama of the thing are worth multiple P1s, P2s, P3s etc.....

Gotta love the Autocar. Nitpicking the Aventdador, whilst waxing lyrical about the P1!

Well, I for one, would go for the Aventador every time. The looks, the engine and the sheer drama of the thing are worth multiple P1s, P2s, P3s etc.....

I agree wholeheartedly, and Prior neatly sidesteps the P1's glaring flaws, that it's more intimidating to drive than the Aventador.

And Prosser, who usually gets much right, fails to mention the 812Superfast hardly weighs less. Not every idiot wants to always go sideways.