The new Jeep Wrangler Magneto concept provides clues as to how the legendary American 4x4 will survive into the electric era.

The Magneto has been revealed ahead of this year's Moab Jeep Safari, at which the SUV brand traditionally unveils outlandish one-off takes on its production cars.

It's one of four concepts heading to Moab in 2021, alongside a restomod version of the 1968 Jeep Commando, a heavily upgraded take on the Gladiator pick-up truck and an open-top take on the conventionally fuelled Wrangler that pays tribute to the model's heritage.

The Magneto's single-motor powertrain is said to offer performance on a par with the standard Wrangler's 3.5-litre Pentastar petrol V6, packing 281bhp and 273lb ft for a 0-60mph time of 6.8sec and "unmistakable rock-climbing force".

Unusually, the motor is mated to a six-speed manual transmission and a clutch that operates "as it would with an internal combustion engine". Regenerative deceleration like that allowed by a conventional EV's single-speed transmission still features when the clutch is engaged.

The future production version of this concept will likely adopt a single-speed set-up. 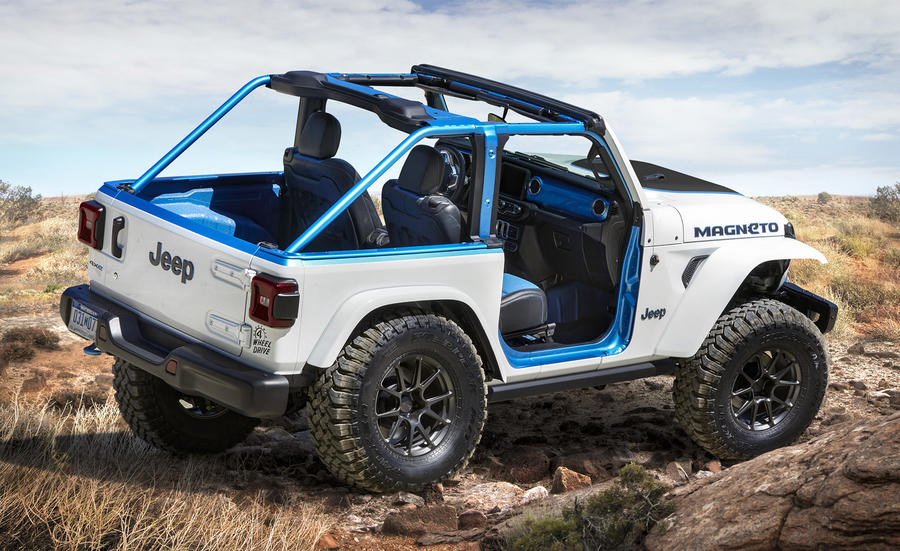 The new powertrain is said to emulate the character of the V6 engine, with a "negligible" perceivable difference between the two in normal use.

Power is stored in four battery packs - distributed around the chassis for optimal weight distribution - with a combined capacity of 70kWh and equipped with 800V hardware for rapid charging. Each is encased in a waterproof enclosure so as to not diminish the Wrangler's off-road prowess (it can wade at depths of up to 30in) and are protected from impacts by custom skidplates.

Jeep hasn't quoted a range for the Magneto concept, but a 70kWh battery capacity should be enough for more than 220 miles per charge, which would likely increase with smaller tyres fitted.

As a concept, the Wrangler Magneto is finished in a striking bright white-and-blue colour scheme and features bespoke styling cues including a redesigned tailgate, uprated lights and a performance-inspired bonnet. Off-road upgrades extend to a 2in lift kit, 17in wheels wrapped in 35in tyres, a roll cage and beefy bumpers with a winch on the front.

Jeep has yet to launch a production-ready pure-EV, although the Wrangler 4xe plug-in hybrid is due in Europe later this year with a combined 370bhp from its petrol-electric powertrain and an EV range of 25 miles.

A six speed gearbox in an electric car seems ridiculous. Only golfers may find interest. After all, they are used to play with sticks.