Hyundai has shown off the performance potential of future electric N cars with the road-legal 799bhp RM20e prototype at the Beijing motor show.

RM stands for ‘racing midship’, and refers to the car’s mid-mounted electric motor, which is said to offer “ideal balance and agility from a low polar-moment of inertia” - meaning it is easier to rotate the car about its axis.

It has been developed as a test bed for Hyundai’s N performance division to explore the capabilities of an electric powertrain, and follows in the footsteps of the similarly conceived RM14, RM15, RM16 and RM19 prototypes from recent years.

With 708lb ft of torque deployed to its rear wheels, the RM20e is said to dispatch the 0-62mph sprint in less than three seconds and be travelling at 124mph after just 9.88sec. Top speed has been limited for the purposes of public road driving to 155mph. Hyundai says it balances these “race-car-like levels of performance, balance, braking and grip” with “daily-driver quietness, responsiveness and road-going capability”.

Last year, the brand unwrapped the similarly conceived Veloster N eTCR as its first electric race car, set to compete in the new eTCR electric touring car series but unable to be driven on public roads. 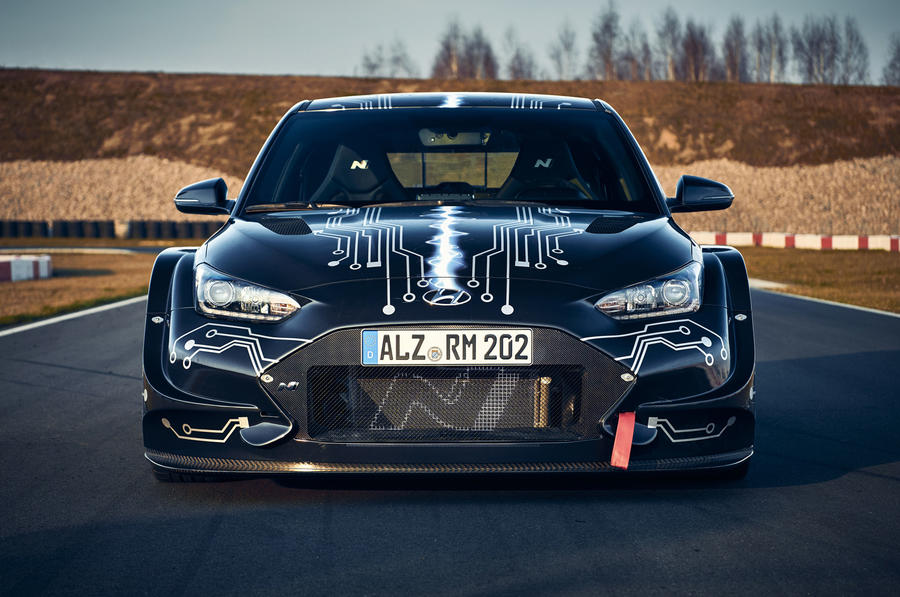 Hyundai’s electric sports cars will be developed with engineering input from new strategic partner Rimac, whose own electric performance flagship, the C_Two hypercar, will touch down in 2021 with 1999bhp and a top speed of 258mph.

Hyundai said the prototype’s RM platform will “continue to evolve along with the growth of this Rimac” and that taking its N brand into “the forefront of environmental responsibility” forms a part of its plan to introduce 44 electrified models by 2025.

The brand’s first electric sports car is likely to be based on the rakish Prophecy concept revealed earlier this year. With a radically different design to Hyundai’s current production cars, the Prophecy emphasises aerodynamic efficiency and features an open, airy interior - suggesting it will not take its power from a mid-mounted electric motor.

Hyundai and Rimac team up to develop electric performance cars​

The racer looks awesome, it would be wild if it go onto the roads in a toned down version with half the power because it would still be a fast car.