The Hyundai Kona Electric is perhaps most simply described as the other battery-powered compact crossover SUV due to be arriving in UK showrooms in 2018.

Given the coverage generated already by the Jaguar I-Pace even before the car has been properly launched to the press, Hyundai might do well to grab more than a moment of limelight for the Kona Electric — a car that, while far from ordinary-looking, hasn’t got the razzmatazz of Jaguar’s design, the sheen of its premium brand, or quite that car’s performance appeal.

But, as a drive in a prototype on German roads has just revealed, the Kona Electric may well have more of what really matters to EV drivers than what Hyundai and Kia has delivered with their electric efforts thus far, or that its direct rivals offer: battery range.

The exact positioning of Hyundai’s second all-electric passenger car to market, after the Ioniq, is still to be confirmed ahead of a UK showrooms arrival later this summer. What’s already clear, however, is that the Kona Electric won’t be priced like too many other compact crossover hatchbacks; company sources suggest they’re working hard to make the top-of-the-line version between £35,000 and £37,000 (before any purchase incentive).

So this’ll certainly be an expensive crossover hatchback in flagship trim, at least, and a fairly pricey compact EV to boot. But it’ll also be a relatively powerful one, with a 201bhp electric motor driving the front wheels and a lithium ion battery that, at 64kWh of storage, is a closer match for the battery capacity of a Tesla Model S than that in a Volkswagen e-Golf or Nissan Leaf.

For those who’d prefer it, Hyundai will also offer the car with 134bhp of motive power and 39kWh of power storage, very likely for a starting price well below £30,000 once the Government’s plug-in car grant has been accounted for. 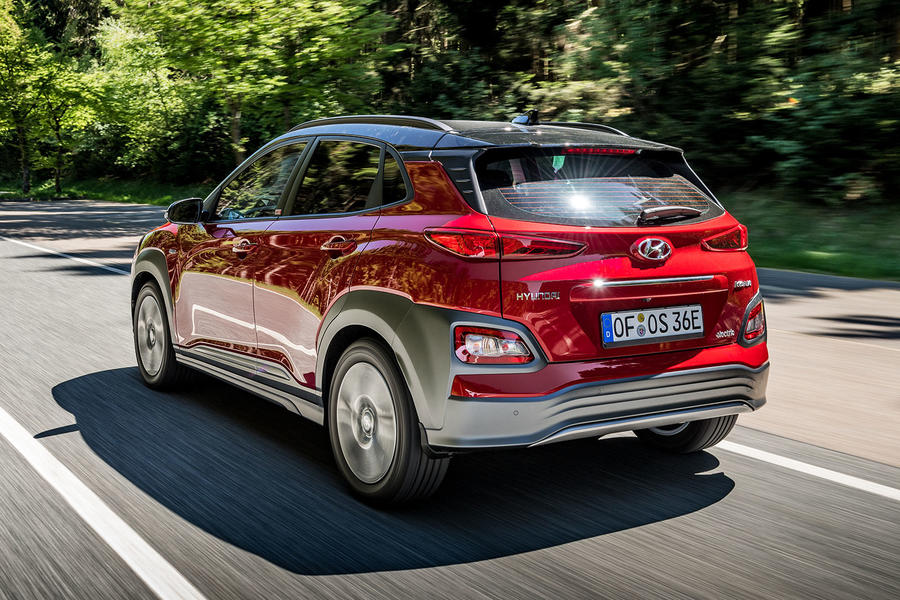 Based on a model platform that was designed for electric propulsion from the start, the Kona Electric has a drive motor similar in concept to the one that powers the Ioniq Electric, but a battery that’s different from that of its sibling in one key respect: it’s liquid-cooled. It’s heavy, too — making the Kona Electric’s kerb weight swell to more than 1.6 tonnes in the case of our test car.

But then big batteries tend to be heavy ones and the Kona Electric’s has been rated as being worth exactly 300 miles of cruising range for the car on the Worldwide Harmonised Light Vehicle Test Procedure lab test cycle. That bests the ‘autonomy’ of the latest Leaf and Renault Zoe by around 70% and is also comparable with the brim-to-brim touring range that you might expect of a petrol-powered Kona of similar power and performance. Charging is possible via AC at-home wallbox or by CCS DC 100kW fast charge, the latter needing 54 minutes to give an 80% charge to the battery.

While the Kona Electric is front-wheel drive, unlike other front-driven Konas it uses the more sophisticated independent rear suspension system you’ll find on the more powerful four-wheel-drive versions instead of the torsion beam rear configuration adopted at the cheaper end of the car’s showroom range.

The car has the high standard equipment specification you’d expect of a car at the price (an 8.0in touchscreen infotainment system, digital instruments, a head-up display and a premium audio system), while a redesigned grille and bumpers, as well as bespoke 17in alloy wheels, distinguish the car from its rangemates. Back on the inside, the Kona Electric offers marginally reduced boot space relative to other models, down 29 litres to 332 litres overall.

The interior of our prototype test car wasn’t representative, we were assured, of the final production version for material specification or fit and finish. Our car certainly suggested Hyundai will have its work cut out to make this feel like a car worth a £30k price tag, with trim quality on the door consoles in particular looking and feeling a bit cheap — albeit perhaps misleadingly so. The Kona Electric’s also only averagely practical by compact crossover standards; there’s enough rear-seat accommodation for growing teenagers but the back seats are a bit of a squeeze for full-sized adults. 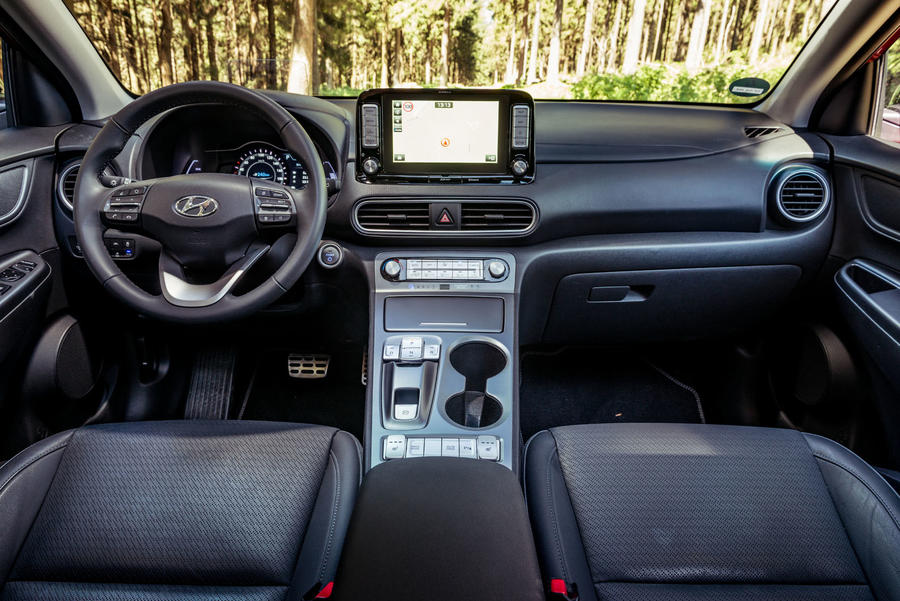 What is the Hyundai Kona Electric prototype like to drive?

On the move, our test car rode with decent suppleness at town speeds and with reasonable isolation on the motorway, in spite of its efficiency-boosting tyres. But while the car corners flatly, its grip levels are quite modest — even on bone-dry Tarmac — and are such that, even though its traction and stability control systems make the car easy to keep control of, you couldn’t call it fun to drive. Weighty steering and vertical body control that can run away a little unchecked over bigger lumps and bumps combine to make the Kona Electric feel like a bigger, heavier car than its dimensions might suggest.

You can certainly feel the effects, at times, of that 291lb ft of torque (a figure that’ll be common to both versions of the car) being transmitted to the road exclusively through the front wheels. There’s a pervasive numbness to the car’s steering, but it can’t quite mask the effect of all that tractive force interfering with your chosen steering line when you accelerate hard from lowish speeds. We should add, however, that while our test car wasn’t quite production-spec in terms of interior finish, neither was it quite representative of the finished version in terms of suspension tuning.

The Kona Electric’s performance level feels strong – although, due to its weight, perhaps not as strong as its headline power and torque lead you to expect. Hyundai quotes a 0-62mph showing of 7.6sec — which beats any comparable rival save for BMW’s i3.

But like all directly driven EVs, the Kona Electric feels much stronger when speeding up from town speeds than it does on the motorway, where it remains only adequately responsive and quiet. There is, of course, excellent throttle response and linearity to enjoy about the way the car responds to your right foot, but there's also a slight sense of fussy oversensitivity to the accelerator feel that can make the pedal tricky to modulate when using Sport driving mode; we much preferred driving the car in Comfort mode.

And for those primarily interested in whether the car’s battery range is really as good as Hyundai claims, there’s encouraging news. Our test route included town, motorway and mountain roads, and intensive driving as well as touring. While the car’s indicated average energy efficiency, tested over extended distances, was as high as 7.0kWh per 100km and as low as 16kWh at times, our overall experience suggested that you could easily average the 12kWh per 100km necessary to make good on Hyundai’s 300-mile real-world range on a mix of urban and extra-urban roads. At times, you could even improve on it.

While price may therefore make the top-of-the-range 64kWh version a tough sell to some, to others it’ll earn consideration for its battery range alone. On this evidence, it’ll be a car with strong performance and refinement, as well as respectable if undistinguished handling.

But it’ll be the 39kWh version of the Kona Electric that could represent the greater threat to the market’s bigger-selling battery cars, whose near 200-mile range should also be believed on this evidence. Its positioning could represent a tempting proposition to customers clearly predisposed towards a crossover bodystyle, who are ready to make the jump to an electric car with just enough usability to meet their needs. 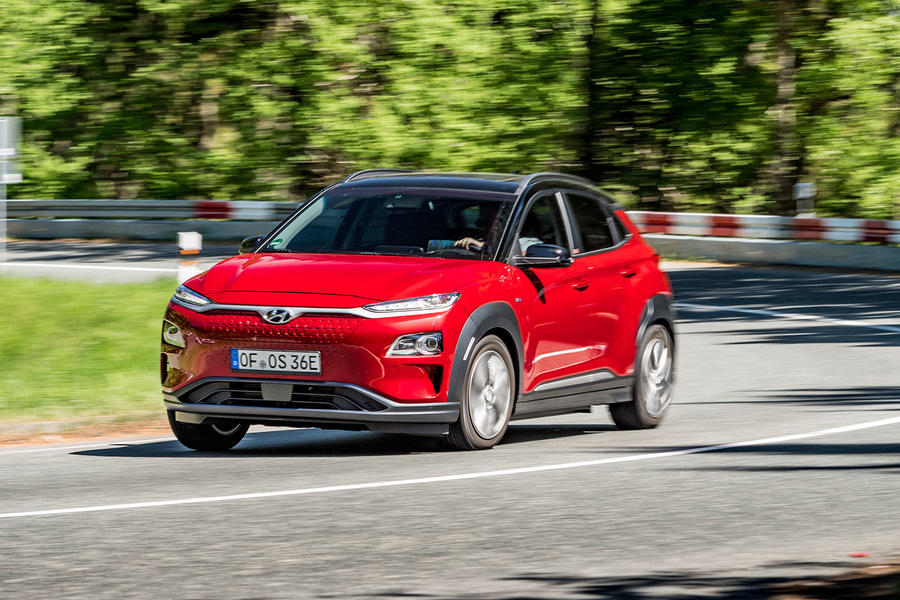 Have you seen the Jag in real life

I have and sad to say it is not pretty.  The rear end is more Juke than anything, and the windows are too small with too much metal in the sides. Plus it is priced at £65K to £85K on the day I saw it. The seats not very good, the driver set very far back, and the interior space not that good when you look at how large it is. sorry to slam Jag, I expected a lot and it fell short in my eyes.

This car, ok its not great looking but its price is a lot lower. If the range is good I may well be tempted.

For a small crossover i think its distinctive and smart , it's got a Citroen vibe going on , which at the moment is a good thing !
Einarbb 11 May 2018

Worth considering, this car's performance as well it's electric

It has about the performance of Golf GTE while being pure electric not hibrid. It would be possible to offer a cheaper pure electric version with lower trim level smaller battery and weaker electric motor. At least halfing the gap if not more between current variants of Kona and this particular electric variant. Clearly buyers soon shall have choice of around 30K to 30K plus electric cars with very acceptable range. That is probably not yet cheap enough for electric cars to take over the market - for that to happen they'd probably have to be available another 10K down the price range while still offering very reasonable range. That's probably another car generation away - but in another 10 years such cars have probably arrived.