BACK TO ALL NEWS
Currently reading: Hardcore BMW M3 CS revealed
UP NEXT
Sorry, wrong number: the forgotten problem of car clocking

BMW’s M division has applied its latest performance-enhancing Club Sport treatment to the fifth-generation M3 with the introduction of the limited-edition M3 CS.

The new performance saloon is powered by a 454bhp twin-turbocharged 3.0-litre in-line six and follows the M4 CS, with which it shares much of its mechanical package. The M3 CS will be available to order in the UK in January 2018; deliveries will be due after a planned start to production in March.

Building on the developments used on the M3 Competition Package, the M3 CS adopts a number of lightweight body components in line with the approach taken for the M4 CS. These include a carbonfibre-reinforced plastic roof and bonnet. The new roof is claimed to save 6kg over the steel structure in the standard M3. 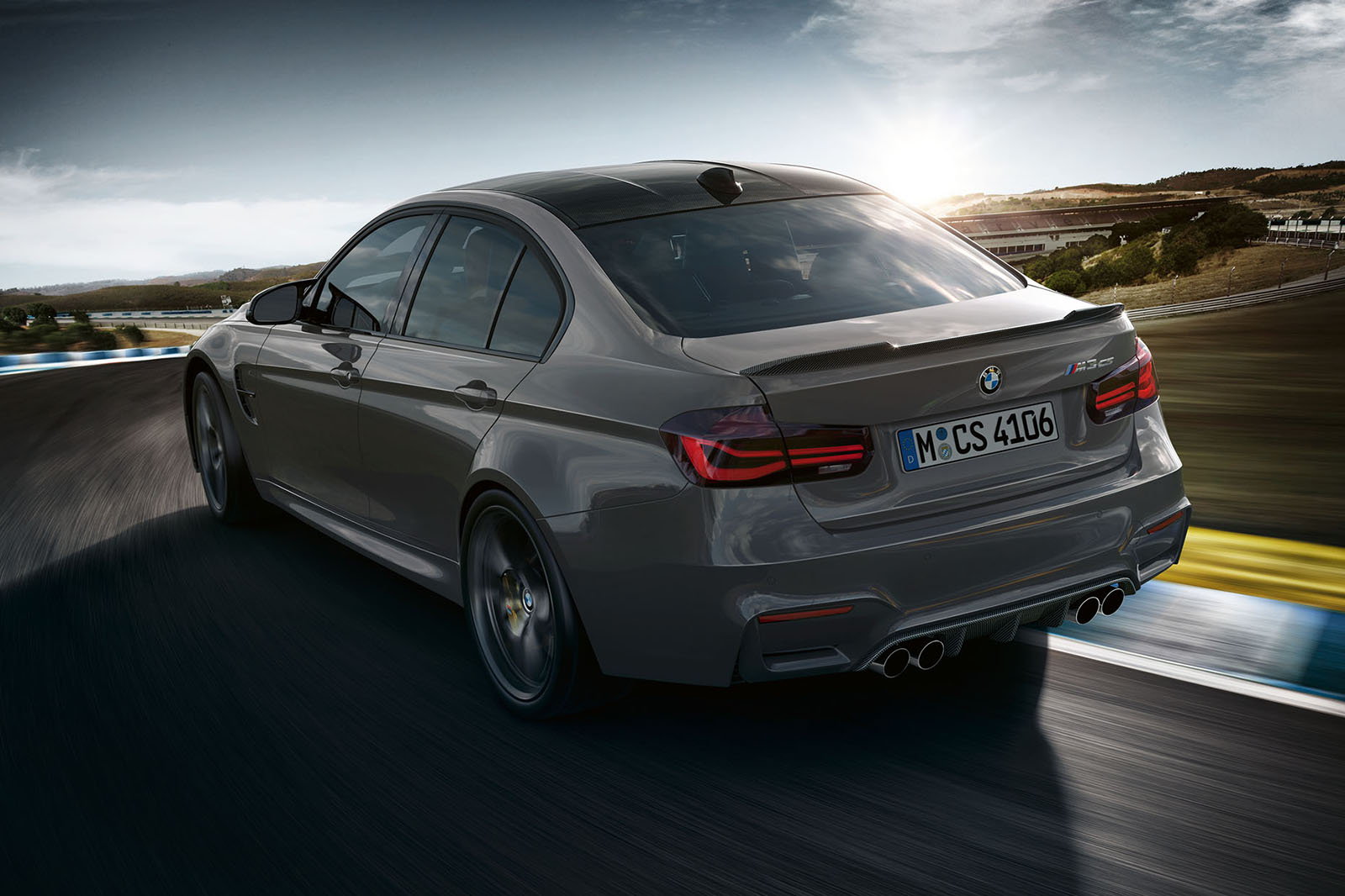 Inside, the M3 CS acquires the lightweight M sport seats and sport steering wheel from the M3 Competition Package. Borrowing a cue from the new M5, there’s also a new red starter button.

Despite the focus on performance, features such as BMW’s Professional navigation system, climate control air conditioning and a Harman Kardon sound system are fitted as standard, and the rear seats are retained. However, buyers can specify the new four-door with a series of unique Alcantara and leather accents as an option. 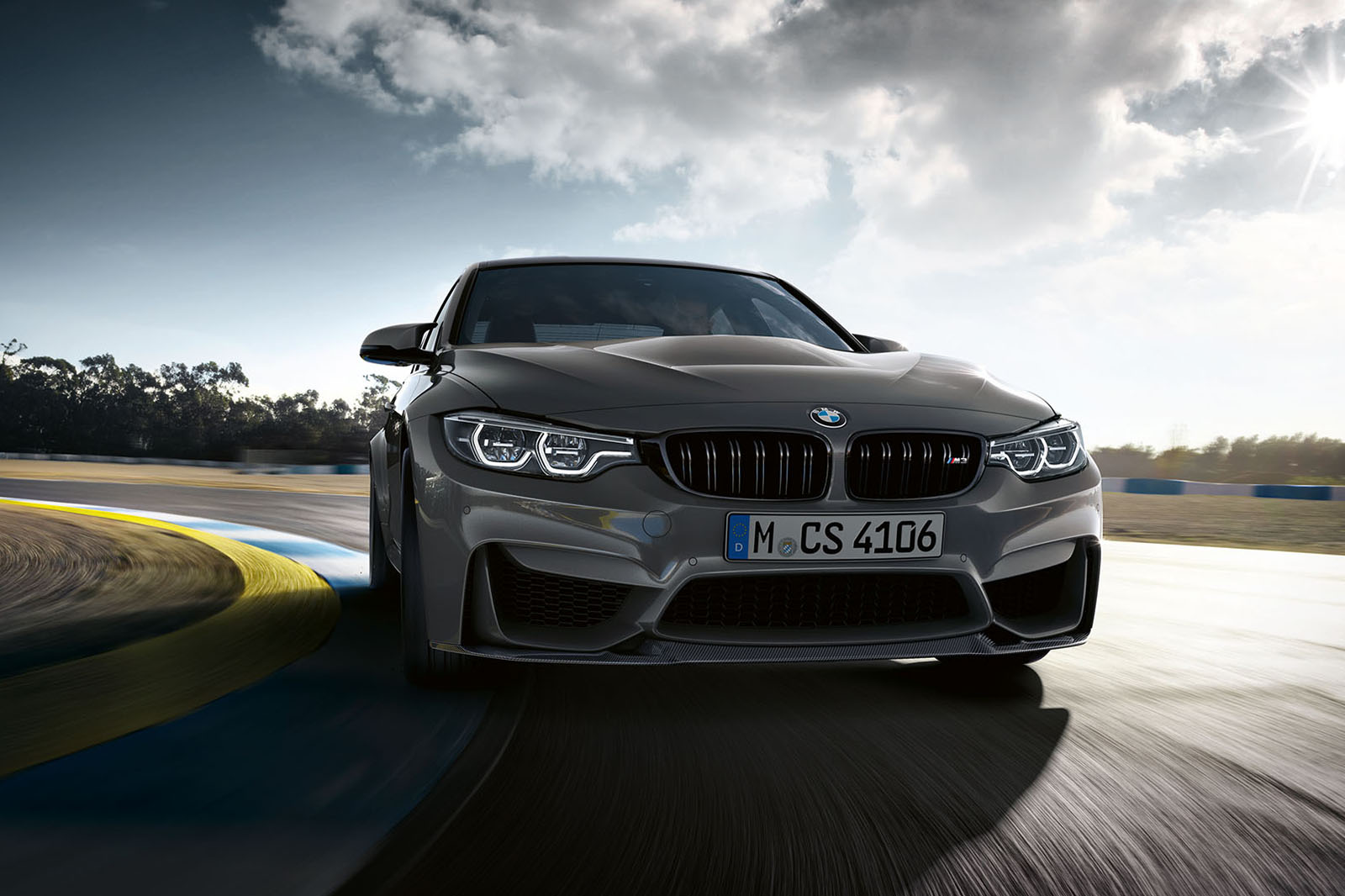 Overall, BMW M claims a 10kg reduction over the standard M3 at 1585kg. Although this is not a significant loss, insiders suggest the M3 CS’s centre of gravity is lower than that of the already heavily focused M3 Competition Package.

Power for the M3 CS comes from the same evolution of BMW M’s twin-turbo 3.0-litre straight-six petrol engine unveiled in the M4 CS. With 454bhp at 6250rpm and 443lb ft of torque from 4000rpm-5380rpm, the longitudinally mounted unit develops 29bhp and 37lb ft more than the motor used by the standard M3. It also packs 10bhp and 37lb ft more than the earlier evolution of the engine developed for the M3 Competition Package. 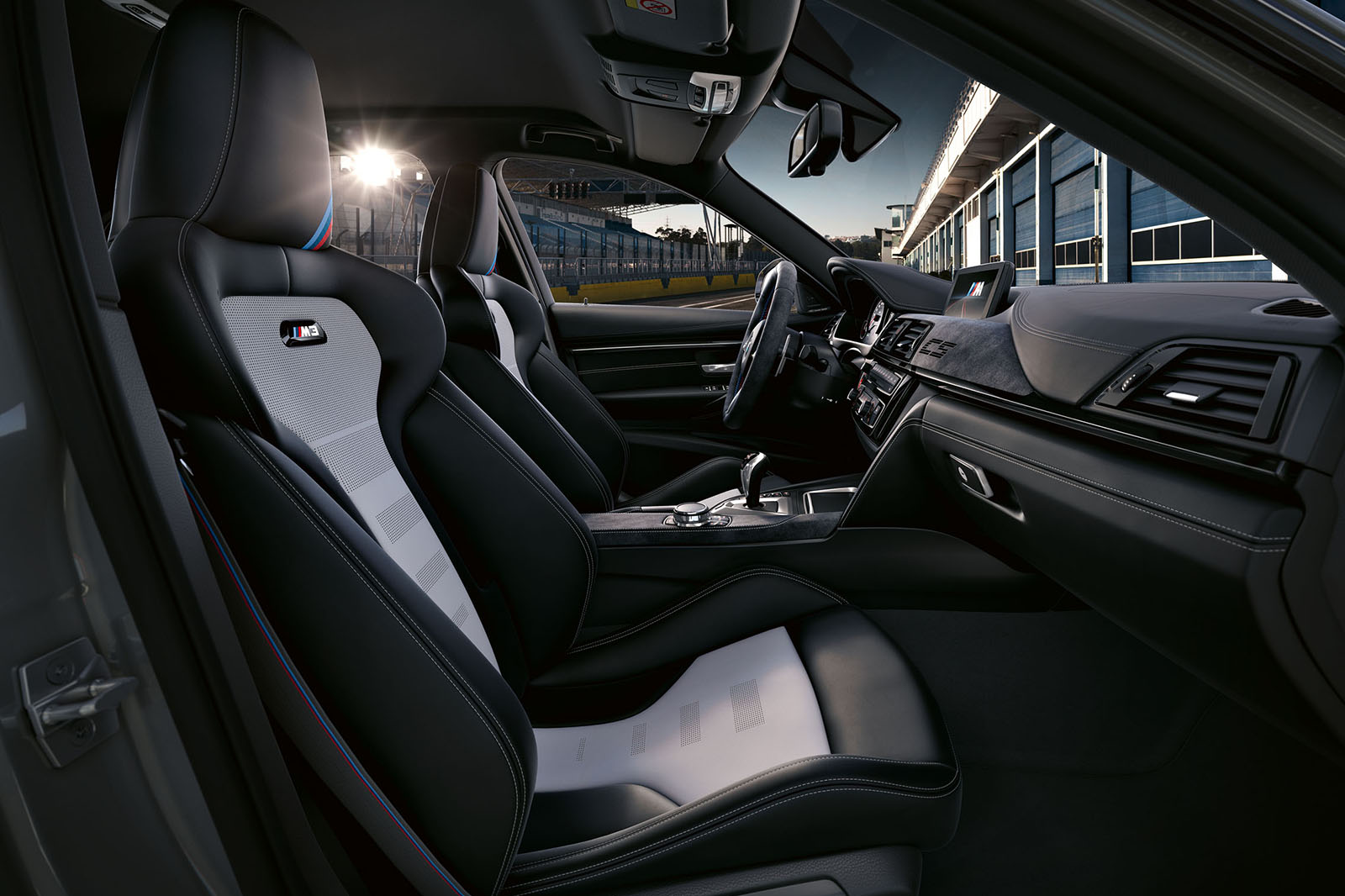 Power is channelled through a standard seven-speed dual-clutch gearbox and electronically controlled M differential to the rear wheels.

BMW quotes a 0-62mph time of 3.9sec, making the M3 CS the fastest-accelerating road-going M3 model yet. By comparison, the standard M3 has an official 0-62mph time of 4.1sec and the M3 Competition Package takes 4.0sec.

The top speed of the M3 CS is the same as that of the M3 Competition Package at 174mph. 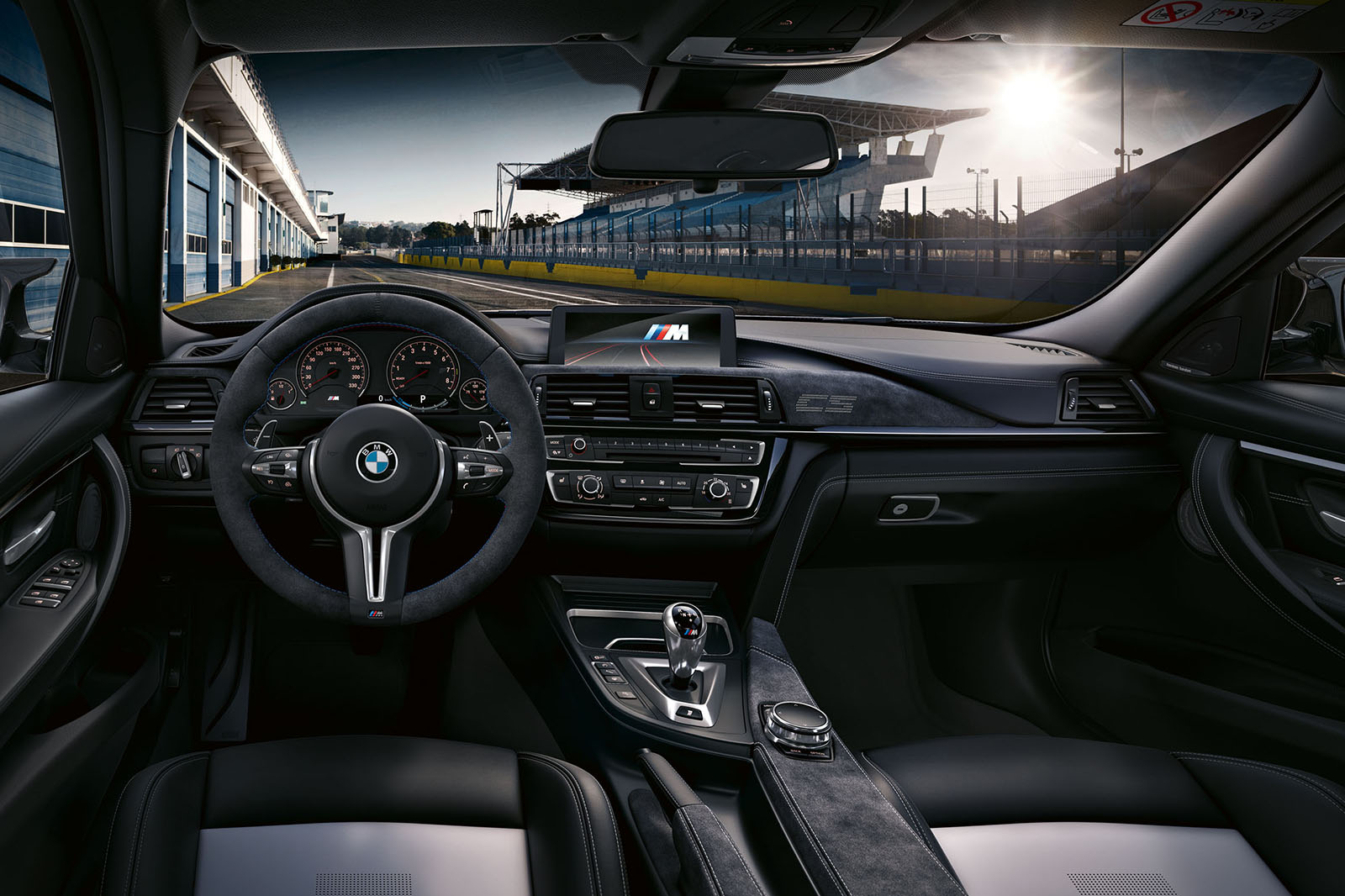 Along with the increase in power and torque, the new engine also receives a reworked sports exhaust featuring what BMW M describes as a CS-specific exhaust note.

The M3 CS rides on a specially tuned version of the M3 Competition Package’s suspension. It is combined with standard 19in front wheels shod with 265/35 Michelin Pilot Sport Cup 2 tyres and 20in rear wheels with 285/30 rubber.

In line with the M3 Competition Package, the M3 CS also employs BMW M’s compound brake package, which features four-pot calipers up front and two-pot calipers at the rear. 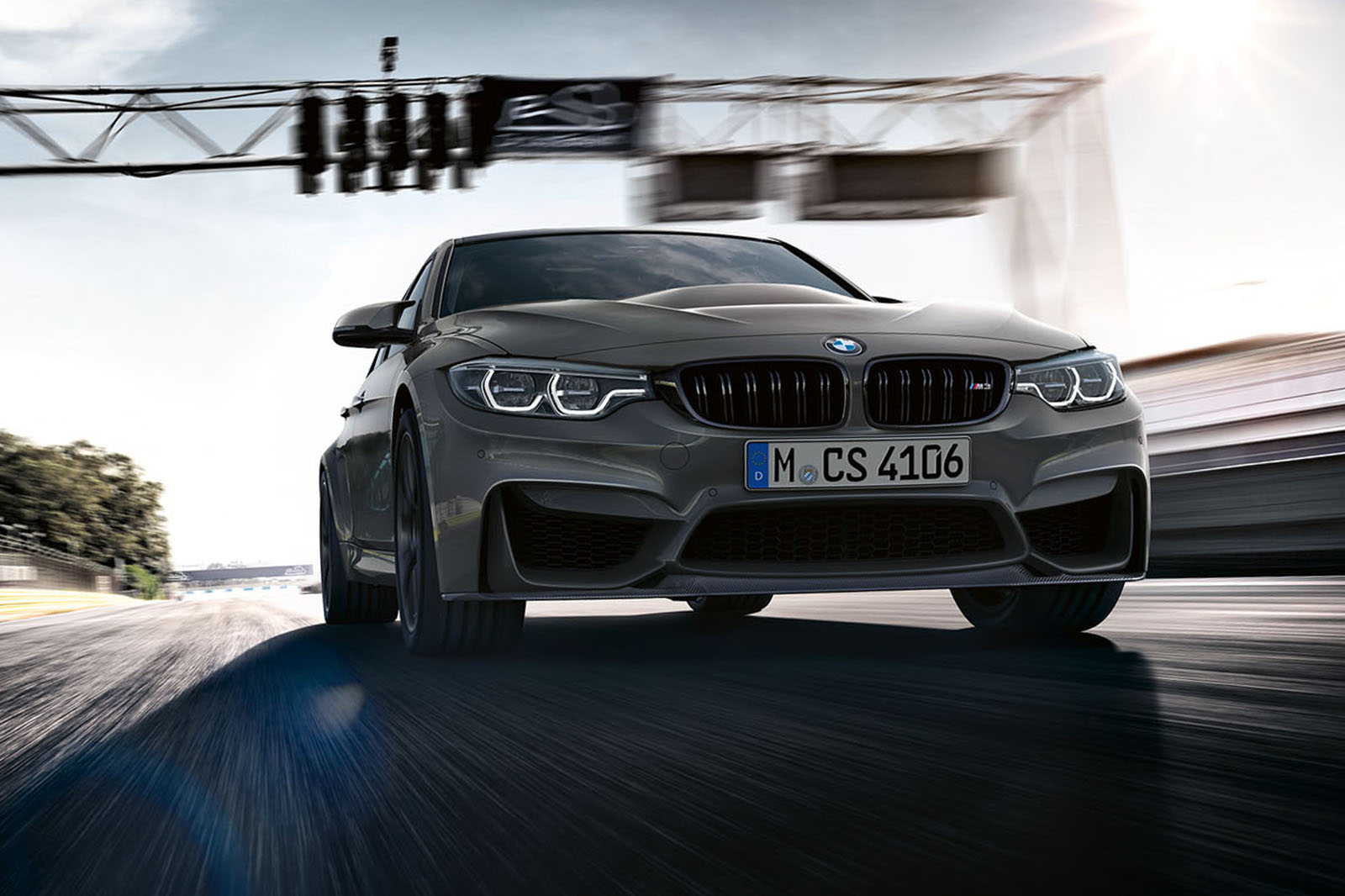 Production of the M3 CS will take place at BMW’s Regensburg plant in Germany and will be limited to 1200 units.

The article is wrong

"The top speed of the M3 CS is the same as that of the M3 Competition Package at 174mph."

No, the raised top speed of the M3 CS only comes with the M Drivers Package, the M3 Competition Package version does not have this. That car is limited to 155mph, the same as the standard M3.

...and I don't just mean the apparent 'attack-of-the-accountants' that has occured by cheapskating in the lubrication department...if Bimmerpost is to be believed. And I do indeed believe them.  The worst M3 engine ever made ?  Certainly the worst sounding. I've no desire to own one, drive one nor,  indeed, to be aurally assorted by one on the street. There's something deeply "I-own-a-chain-of-Cash-&-Carry-warehouses-in-Bradford" about the F82....unfortunately.

Something has gone tragically

Something has gone tragically wrong at BMW, and M in particular.
Symanski 8 November 2017

Something has gone tragically wrong at BMW, and M in particular.