BACK TO ALL NEWS
Currently reading: Full new Nissan X-Trail details revealed - plus new pictures
UP NEXT
Analysis: Subaru staying in Europe despite 2020 "disaster"

The new Nissan X-Trail, which shares its platform with the Qashqai, will start at less than £25,000; seven-seat option to be offered, too
Share
Open gallery
Close
Share story
News
by
2 mins read

The all-new Nissan X-Trail will cost less than £25,000 when it goes on sale in May, while range-topping models will cost just over £30,000. Three chassis configurations will be offered, along with five- and seven-seat options.

The X-Trail will initially be offered with the same 1.6-litre turbodiesel as fitted to the new Qashqai, which develops 130bhp. The 1.6-litre DIG-T from the Juke Nismo will be offered after launch, but for this application power output will be reduced from 200bhp to 160bhp in an effort to increase economy.

Nissan says around 45 per cent of buyers will choose a front-drive variant, with a similar number opting for four-wheel-drive models. Around 10 per cent of models will be fitted with Nissan’s X-Tronic CVT transmission driving the front wheels.

In front-wheel-drive guise, emissions are rated at 129g/km, rising to 135g/km and 139g/km for X-Tronic and four-wheel drive models. Fuel economy is said to be around 57, 55 and 53mpg respectively.

The sleeker styling is a direct effort to attract current Qashqai+2 owners, a model that is no longer offered. Although around 100mm longer, prices are expected to climb slightly for comparable engines. No prices have been confirmed for the seven-seat option, but an insider said prices would compete with the £1200 option in the Hyundai Santa Fe range.

Both five- and seven-seat variants will have broadly the same bootspace, although five seaters will gain additional under-floor storage. The rear doors open to 80 degrees and the rear seats recline and slide, boasting best-in-class rear legroom.

Although the full range has yet to be confirmed, a source said the range will closely mirror that of the Qashqai. Higher spec models, like the Tekna trim pictured here, will feature 19in alloy wheels, electric leather seats, a full-length, part-sliding sunroof and a powered tailgate.

Nissan confirmed that despite sharing the Qashqai’s platform, the X-Trail will not be built in Sunderland. The plant is running at near capacity, and the forthcoming Infiniti Q30 hatchback will increase plant output further.

The X-Trail is already on sale in North American markets, badged as Rogue. That model features a 170bhp 2.5-litre petrol engine mated to Nissan’s X-Tronic transmission. Nissan has confirmed that engine will not be offered in European models, though. 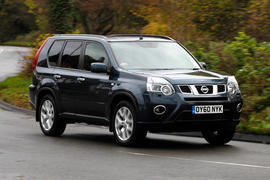 The Nissan X-Trail has well-judged ride and handling, but it gets expensive when kit is added

This is not a seven seat car. It's a 4.5 +2 seat car. Any car targeting the family market would have a 33%(ish) split on the second row - AND IT HACKS ME OFF HOW FEW 'SUVs' HAVE. I walked away from the Santa Fe due to this 'issue'. I'm still tooling around in my 9 year old (from new) XC90 waiting for someone to give me a reason to spend some money. This is all because I've had the audacity to have three children.
Walking 2 May 2014

If you only have 3 children why do you need 7 seats? Try looking for a car with 4 children under 7! I drive a mazda 6 which fits me 2 booster seats and 2 front facing child seats. For the whole family we have a Honda FRV which works great. We looked at some 5 + 2 options however at the time all 4 needed help strapping in which looked a nightmare with that setup.
Kamelo 11 April 2014

Messy exterior design and as for the interior - well, it looks like it was designed 4 years who, and is just as messy. The next 5 or or so years will see interiors become much more refined, sophisticated, with far fewer buttons, and much less 'in your face'. This interior will look naff by the end of 2015. Just wait though for the marketing bullsh**, and I bet you won't have to look far before that often overused and little understood buzzword for the 2010's - yes, you guessed it - 'PREMIUM', will make a few appearances. X-trail has always been competent but never really outstanding at anything, except perhaps space. Noisy, unsophisticated, mediocre materials, huge depreciation, and you don't see many of them past 6 years old - mostly driven by grumpy looking old men. Of course, there will always be people who will have had 3, never had a problem with them and wouldn't buy anything else - but you have people who say that with ANY car!
fadyady 11 April 2014

Basically this is a 7-seat Qashqai or at least a replacement for that.
View all comments (10)