BACK TO ALL NEWS
Currently reading: Ford Puma ST hybrid prototype spotted at the Nurburgring
UP NEXT
Toyota Prius: hybrid pioneer set to enter fifth generation in 2022

Ford looks to be testing a hybrid version of its hot Puma ST at the Nürburgring, which means a more efficient yet more potent powertrain option could be on the cards.

The car was spotted with ST-Line badging but sported several of the design features bespoke to the full-fat ST, including its unique alloy wheels, bumpers and red brake calipers.

The yellow sticker on the rear windscreen indicates a hybrid element in the powertrain. There was no charging flap on display, ruling out the possibility of a plug-in powertrain. That means the model undergoing tests was either a full-hybrid or mild-hybrid set-up. The latter is more likely, given the Puma is not offered with the 2.0-litre engine common to all full-hybrid Ford models. 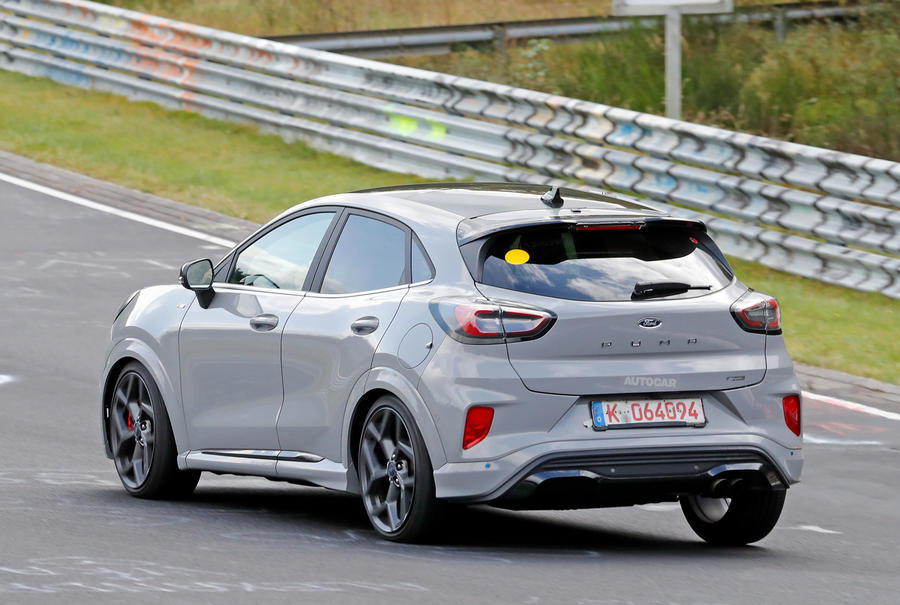 The standard Puma is currently sold with a mild-hybridised 1.0-litre Ecoboost triple producing 123bhp, but the Puma ST is not yet available with an electrified powertrain.

The model currently offers 197bhp, so a move to hybrid power would be likely to push the model over the 200bhp barrier while delivering improved economy figures.

The performance crossover is already set to receive a hybrid powertrain in a motorsport capacity in line with new World Rally Championship regulations in 2022, which will see all competing cars equipped with hybrid engines.

Ford's new Puma-based WRC racer, built in partnership with Cumbria-based racing and motorsport engineering firm M-Sport, was revealed at this year’s Goodwood Festival of Speed and is driven by a 1.6-litre turbocharged engine mated to a 134bhp electric motor, producing far more power than the road-going version.

Get your facts right Autocar please, the Puma is offered in both 1.0l MHEV in both 123PS and 155PS variants

Great, just what we need - a heavy, expensive, 130mph, jacked-up and no doubt firm-riding Fiesta. Whatever happened to the simple affordable stuff Ford used to make?