BACK TO ALL NEWS
Currently reading: First drive: 2021 Skoda Fabia prototype review
UP NEXT
Next Mazda MX-5 to maintain driver focus with petrol power

The car you see here beneath the digitally themed camouflage is the fourth-generation Skoda Fabia. Although it is still six months away from a planned UK launch, we can confirm that it is very much a new car, right down to its platform – the same MQB A0 structure used by its Volkswagen Group siblings, the Volkswagen Polo and Seat Ibiza.

The new platform replaces the structure used by the third-generation Fabia launched in 2014 – the PQ26. It is in essence a complete reset for Skoda’s most affordable model, now that the Citigo has been retired from the Czech car maker’s line-up.

The adoption of a new platform is only the start of a wide range of changes, though.

The Fabia also receives a number of other key developments, including greater structural rigidity, a revised range of engines and a more advanced electronics architecture with more contemporary infotainment and connectivity functions, among others, all of which promise to increase the competitiveness of the Fabia, not only alongside its popular Volkswagen Group siblings but also against other compact hatchback favourites such as the Ford Fiesta, Peugeot 208 and Renault Clio.

Not that it has ever really lacked buyer appeal. Since its introduction in 1999, the Fabia has racked up more than 4.5 million sales worldwide, making it the second most popular Skoda model after the Octavia and a key player in its sales growth over recent years.

The prototypes we drove all wore a liberal covering of camouflage wrap. However, the new model does appear to include many of Skoda’s signature design elements, including a prominent grille, angular headlights and a characteristic kick within the rear side window ahead of the C-pillar. 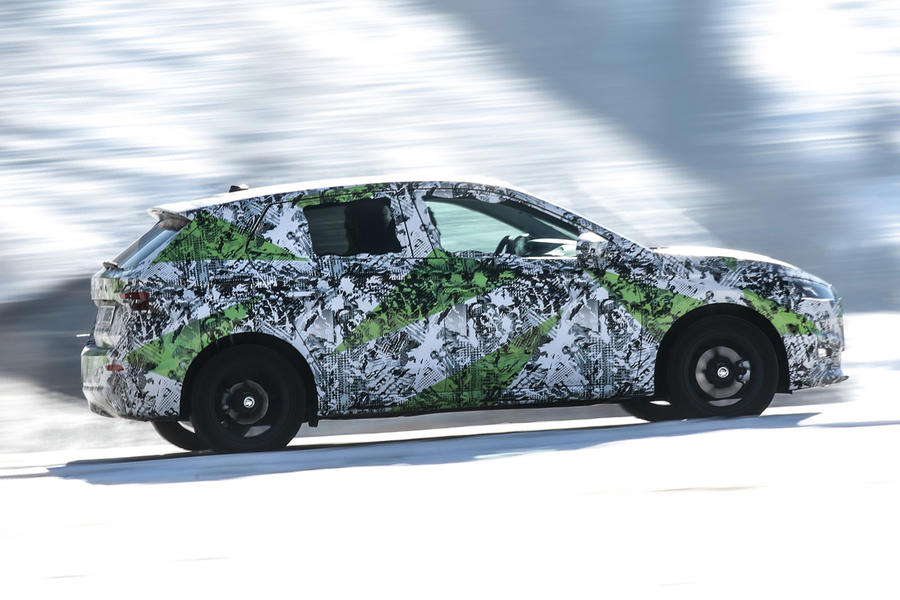 Dimensionally, it has grown: length is up by 111mm at 4108mm and width increases by 48mm to 1780mm. The changes are accompanied by a 94mm- longer wheelbase and wider tracks – both of which play their part in providing the car with a distinctly more confident stance. Larger wheel housings also accommodate a new set of wheels that range from 14in to 18in.

Despite the Fabia’s larger dimensions, Skoda claims a best-in-class drag coefficient of 0.28, helped in part by additional underbody panelling and a newly developed spoiler mounted above the tailgate that helps to accelerate airflow across the roof.

Alongside the hatchback model seen here, Skoda is developing a replacement for the Fabia Estate, although we’re told it won’t be launched until later next year.

The 2021-model-year Fabia draws on the latest evolution of the Volkswagen Group’s three- and four-cylinder petrol engines – all featuring Euro 6 emission compliance and a claimed reduction in consumption compared with the units they replace.

There are three engines in all, led by a naturally aspirated 1.0-litre three- cylinder unit featuring multi-point injection with either 64bhp or 79bhp. The majority of UK sales, though, are expected to come from a turbocharged 1.0- litre three-cylinder engine offering either 94bhp or 109bhp. At the top of the new line-up is a turbocharged 1.5-litre four-cylinder with 148bhp.

Front-wheel drive and a six-speed manual gearbox are standard on both of the three-cylinder engines, with a seven-speed dual-clutch automatic gearbox standard on the four-cylinder, according to early information provided by Skoda.

Predictably, diesel engines have been dropped from the new line-up because of reduced demand in key markets and the sheer expense required to engineer them to meet the latest EU-mandated emission standards. 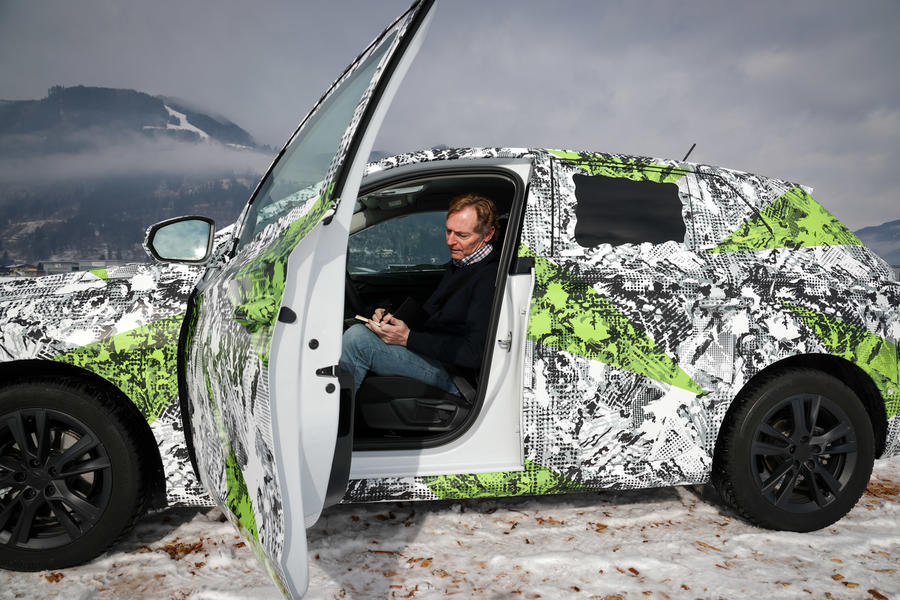 Our prototype test car, a mid-range 1.0 TSI model, runs a turbocharged 1.0- litre petrol engine developing 109bhp in combination with an optional seven- speed dual-clutch automatic gearbox. It is agreeably smooth with a typically raspy but well-isolated three-cylinder exhaust note, delivering reasonable if not exactly muscular step-off properties. Once percolating above 2000rpm, it is quite strong for a small-capacity engine, with a willing and rev-happy character through the mid-range.

A software issue with the gearbox on the prototype we drove meant there was an unusually long pause on upshifts, although Skoda’s development team assures us that it will be ironed out before the new Fabia heads into UK showrooms in September.

With the engines now more economical than before, Skoda has seen fit to reduce the capacity of the standard fuel tank by five litres to 45 litres without, it claims, any compromise in overall range. However, buyers can still specify a 50-litre tank. Official figures are yet to be revealed, although the 1.0 TSI is expected to return close to 60mpg on the WLTP test cycle.

Having only driven it on snow-strewn Austrian roads at below 0deg C, we can’t tell with certainty how the new Fabia might deal with British B-roads.

However, there is greater precision to the steering, which is light but very direct. It feels more agile than its direct predecessor and there are clear lines of communication and very progressive body movements. With an appreciably longer wheelbase and wider tracks giving it a larger footprint than model it replaces, it corners with greater enthusiasm, too.

The biggest improvement in on-road character, though, is reserved for the ride. There is added suppleness and greater absorption to the MacPherson strut (front) and torsion beam (rear) suspension, which while shared with other MQB A0 models – Polo and Ibiza included – has been tuned specifically by Skoda to give the new model its own unique on-road feel. With greater rigidity to its structure, it fidgets less over high-frequency bumps at lower speeds around town and is generally better controlled out on the open road.

Although hidden under the camouflage of this prototype, the interior is set to be a key highlight of the new Fabia. It draws heavily on the digital and connectivity functions as well as the design and material quality found in other recent new Skodas, albeit with quite a few unique touches.

The key attraction is the 10.2in digital instrument panel. It is accompanied by either a standard 6.8in or optional 9.2in touchscreen infotainment display mounted high on the dashboard. The new entry-level Skoda also now includes up to nine airbags.

The driving position is well resolved, with generous adjustment for the seat and steering wheel. Rear-seat accommodation and boot space are typical Skoda strengths, so it comes as no surprise to discover that both have been improved. The boot is particularly impressive, gaining an extra 50 litres over the old Fabia’s for what Skoda describes as a class-leading 380 litres. 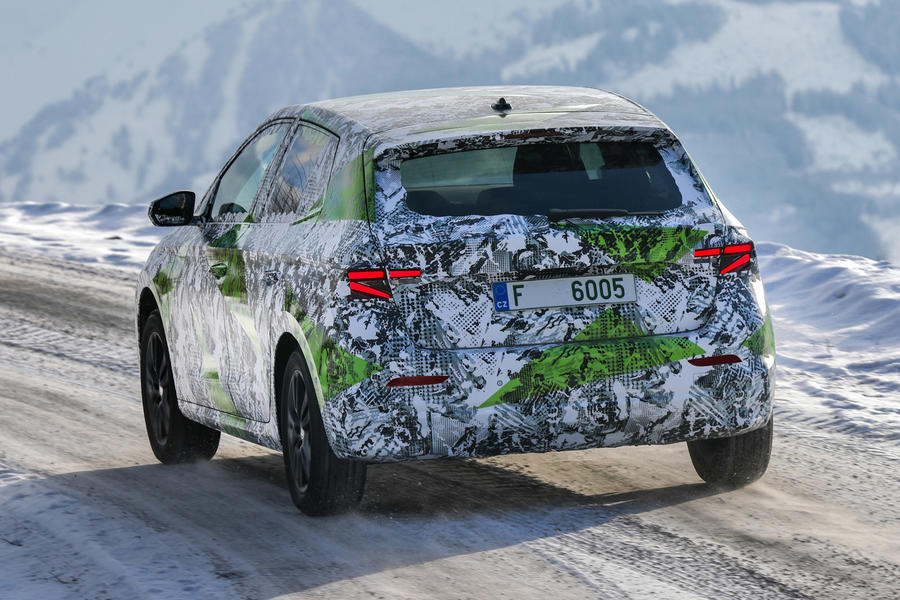 From what we’ve seen so far, the new Fabia is a clear improvement on its predecessor. It does what all mainstream Skoda models in recent years have done, offering a distinctive design, adequate performance in more affordable models like the 1.0 TSI driven here, fail-safe handling, impressive accommodation, a comprehensive equipment list, above-average quality and some clever interior touches.

Success will, however, hinge on price, and indications some six months out from its UK launch are that it will remain close to the £14,605 starting point of the outgoing third-generation model. In a market segment that prizes value for money, this will be crucial.

Let's hope that chassis is well sorted: with the 1.5 engine, it should go quite well (it is the same combo as in my IBIZA FR and that little car is very entertaining when the radar goons have gone for lunch...)

As for VW being unreliable: after many VWs of various sizes, I only moved to SEAT because the equivalent POLO was not available with that power-train... Over many years with VW, hardly any bits have fallen off: lucky me or reliable motors?

I would've been interested in a new shape Fabia a few years ago, especially if they were going to drop a more powerful engine in it.

But let's face it, it's going to be very expensive (as almost all new small cars are and Skoda especially have forgotten their value for money roots) and it's going to have flawed / unreliable VW bits.

And before VW fan boys get shirty, we had a Skoda Octavia from new and it was one of the least reliable cars we'e owned, as well as having poor build quality. Not quite as bad as my abysmally terrible Mazda, but still not good.

This growth in size makes you wonder where it leaves the Scala which as far as I can see doesn’t seem to have been a sales success in the UK. Like so many cars before that sit between the defined B and C classes it gets overlooked.