Beneath the plastic bag shrouds and dazzle camouflage is Peugeot’s new compact crossover, which is codenamed P24. However, to you and me it’s the forthcoming 2008, due to hit UK showrooms sometime in 2020.

Aiming to build on the success of the brand’s larger 3008 and 5008 SUV models, the 2008 has gone fairly radical and adopted the latest CMP architecture. Not only does this mean more safety and space, it allows Peugeot to offer a pure electric version, which is what we drive here - albeit in pre-production guise.

Obviously the garish paint job means we can’t judge the looks (although Peugeot has now revealed the finished article), but it is possible to see the new 2008 is a bigger car than it’s predecessor. Yet while it’s longer and wider than before, it’s also 20mm lower, creating a sportier, more purposeful stance, bagged-up exterior notwithstanding.

The scalable CMP platform is a slightly stretched version of that already seen on the DS 3 Crossback, and will also underpin the forthcoming 208 and Vauxhall Corsa superminis.

Designed from the outset to accommodate EV running gear it uses compact battery packs that are housed in areas that would be home to the exhaust system and the fuel tank of the internal combustion engined versions. This is linked to a 100kW (134bhp) electric motor that drives the front wheels through a single speed gearbox. Peugeot claims that this delivers a WLTP assessed range of 196 miles, which is well short of rivals such as the Kia e-Niro and Hyundai Kona Electric.

Anything else? Well, there will also be internal combustion engines, in the form of turbocharged 1.2-litre (99bhp or 128bhp) and 1.6-litre (153bhp) petrols, plus a 1.6-litre diesel with either 99bhp or 128bhp. Gearbox choice will between six-speed manual and eight-speed automatic. We were given turn behind the wheel of the most powerful versions of the diesel and 1.2-litre petrol, but with suspension and NVH settings far from being signed off (each was essentially running DS 3 Crossback calibration) there was little meaningful to be gained. The EV on the other hand was much closer to production specification. 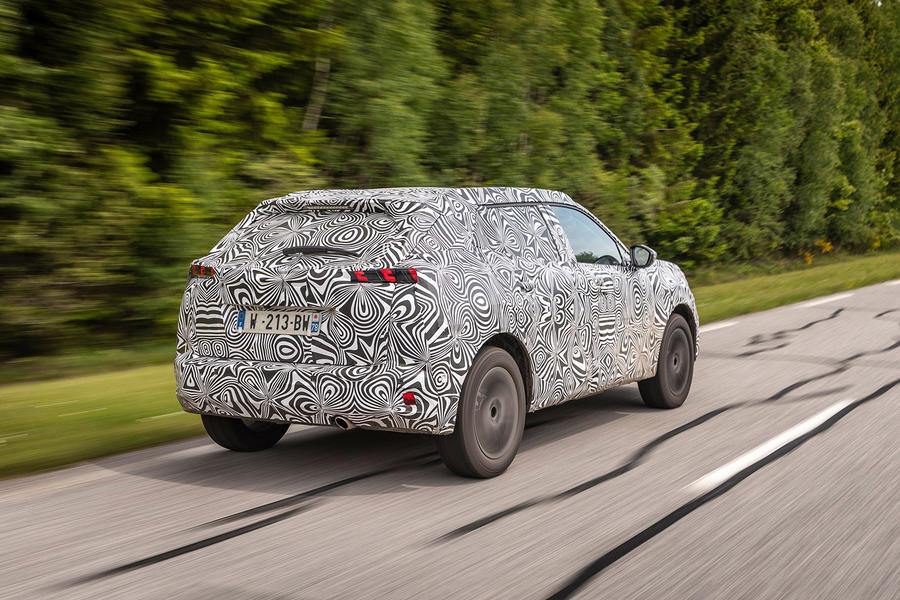 We were only given a few laps of a short loop on Peugeot’s La Ferté-Vidame test track 80 miles or so out of Paris, but it was enough to give us a fair impression of what to expect. To add interest, Peugeot had also brought along a Volkswagen e-Golf and a Hyundai Kona Electric for comparison.

Moving off is as simple as you’d expect from an electric car - prod the ignition switch, push the button marked ‘D’ and away you go, accompanied by the very slightest of whirrs. The first big surprise is that Peugeot doesn’t have the instant and muscular low down punch you expect from an electric motor. The 136bhp motor delivers brisk rather than truly quick acceleration, the 2008 feeling far less responsive than the assembled rivals, even with its Sport mode dialled in. Yet it’s impressively refined, with wind and road noise well suppressed, even as the Peugeot tops 100mph. The more powerful regenerative brake function is effective too, slowing the car strongly enough that the brake pedal needn’t be used most of the time.

Through the corners the 2008 felt by the far the most planted of the three, a corollary of the batteries being placed low and fairly centrally in the e-CMP platform. Where the Golf in particular felt a little flighty, it’s narrow, low rolling resistance tyres quickly overwhelmed by the torque, the Peugeot felt totally composed. It’s not exactly engaging, but there’s decent steering weight, a low roll stance and more than enough grip. The torque vectoring system is effective too, keeping understeer in check without that feeling that the little dabs on the brakes aren’t slowing the car unnecessarily. And while the relatively smooth surface made proper assessment of the ride difficult, the Peugeot’s suspension was quiet with an underlying suppleness that suggested comfort was the order of the day.

Another highlight is the interior, which is several step changes ahead of the old 2008 for style and quality. With the disguise peeled back you could see the satin finish switchgear and 10-inch infotainment screen that ‘floats’ on top of the dashboard. The materials that were finished also has a pleasant look and feel, easily good enough to back up Peugeot’s claim to deliver the best ‘mainstream premium' experience. Yet the highlight is the configurable 3D effect TFT instrument cluster.

It’s also more spacious than before, that extra width and length being put to good use, particularly in the back, where there’s more head and leg room. And while no official figures have been revealed the boot looks more commodious too. 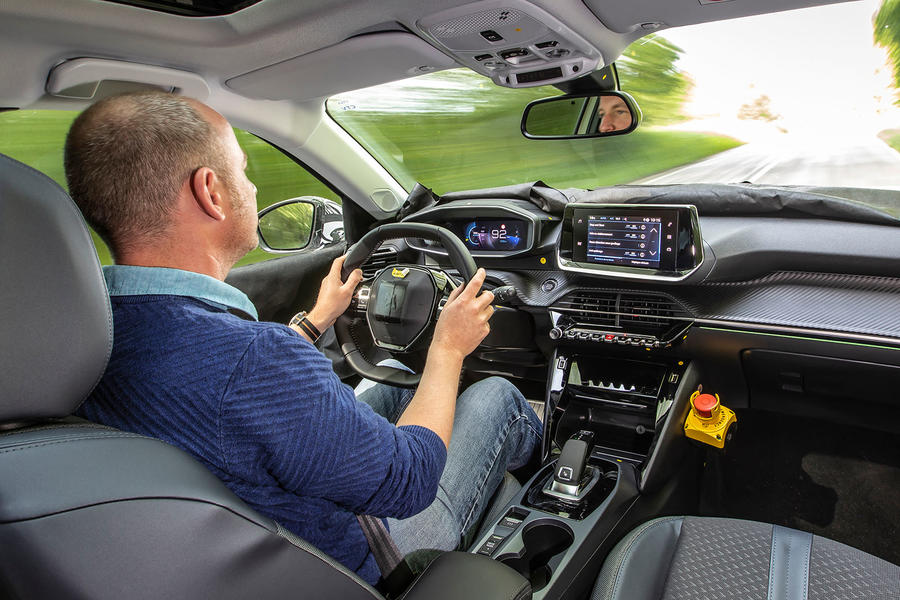 The 2008 is still a way off going on sale, but the initial signs are promising. It has the looks inside and out to win over customers looking for a ‘premium’ experience, while the improvements in space and refinement are welcome.

In terms of its installation, the electric drivetrain is a success, the clever packaging means the EV loses nothing in practicality over the internal combustion engined models. Yet achieving this has required a smaller battery than was probably desirable, with the result the 2008’s WLTP range in 196 miles, which is around 100 miles short of its Kia and Hyundai rivals. Project manager for the 2008, Thierry de la Prade, reckons this isn’t a problem as most buyers will happily put aside any range anxiety if the price is right. We’re not so sure.

And while the Peugeot is quick enough on the road (think 1.6 TDI levels of performance), the normally urgent low to mid-range acceleration you expect from an electric car is missing. Even sharpening the ‘throttle’ response doesn’t make much difference.

On the plus side, the handling is composed and grippy, while on this evidence it rides with suppleness and impressive quietness. No it’s not very invigorating, but that’s arguably not what the target market is after. Crucially, while it’s close to production ready, there’s still some room for a little fine-tuning.

Not so sure about the range

I only do 8k a year but I do quite a few longer trips, often to places with limited charging infrastructure (think Lake District, Snowdonia etc). A 200 mile range might just get me to my destination but if I can't easily charge it's a serious problem. The Kona and e-Niro are therefore more desireable. But, if the charging infrastructure can be improved, this becomes less of an issue.

The vehicle has the following engine options:

"The 1.2-litre, turbocharged three-cylinder will arrive in a choice of 99, 128 and 153bhp outputs with either 6-speed manual or eight-speed automatic transmission. A 99bhp, 1.5-litre four-cylinder diesel will also be available with a six-speed manual only."

The range is plenty if you

The range is plenty if you can charge it overnight in your garage or on your drive. However, that doesn't bond well with its claim of "City SUV" (whatever that means). The vast majority of people in London won't be able to charge it overnight and therefore would have to use the sparse and slow charging infrastructure, and quite often.
200 miles per charge is more than enough for a city car but I would hate to have to find a charger and wait 45 min or so every few days.
xxxx 19 June 2019

Up the apples and pears

.....The vast majority of people in London won't be able to charge it overnight and therefore would have to use the sparse and slow charging infrastructure, and quite often. 200 miles per charge is more than enough for a city car but I would hate to have to find a charger and wait 45 min or so every few days.

You do know people buy cars outside London, and even hundreds of thousands of people living within the M25 have a driveway.  Your comments are like saying 'No' to a Cayman because they don't seat 5.