Ferrari is planning to build a production hybrid that will combine supercar performance with the ability to travel as far as 30 miles in electric-only mode.

The plans are detailed in a patent application that has been uncovered by Autocar and was filed last June.

There’s no direct clue as to the identity of the new model, aside from it being front engined, which puts the replacement for today’s F12 Berlinetta (most likely by the end of the decade) in the frame. However, the nature of Ferrari’s new hybrid layout - with slimline batteries built into the floor structure and an electric motor attached the rear-mounted transmission - makes it suitable for future models with both front and mid-mounted engines.

This means the hybrid system is also likely to be used on a version of the new entry-level Dino model, which is expected to be a more ‘affordable’ mid-engined car, powered primarily by a V6 turbocharged engine. 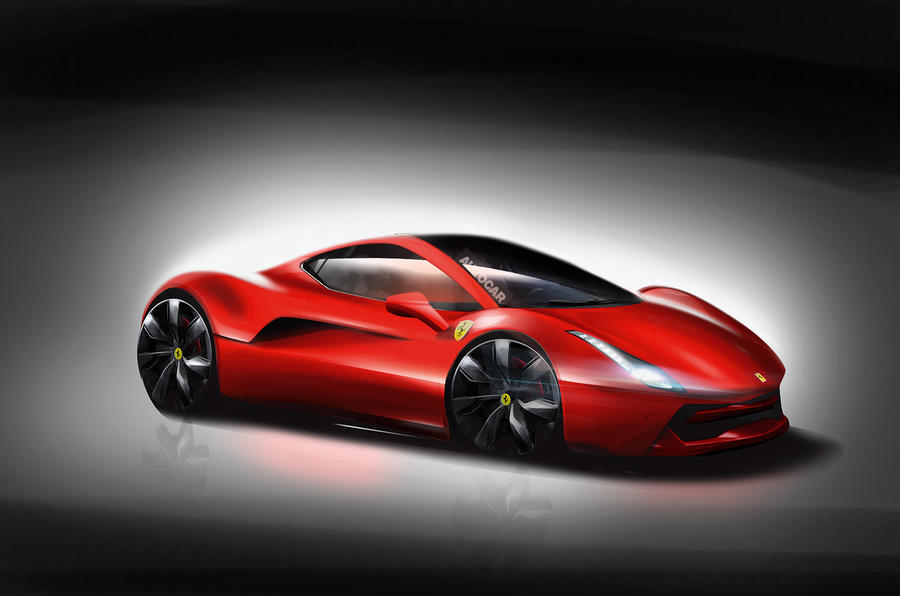 Ferrari showed its first hybrid concept, based on the 599, in 2010 and used electric motors to boost the performance of the low-volume LaFerrari hypercar in 2013. However, this is the first time that Ferrari will have used hybrid technology on a series production model.

As with most car makers, Ferrari believes that many big metropolitan areas will introduce zero-emissions zones during the next decade or so as a way of radically reducing air pollution.

Indeed, London has already announced that all vehicles entering the city centre could have to be zero-emissions capable by 2025.

Like the California T, the new Dino is intended to be a more everyday Ferrari that will attract buyers in affluent metropolitan areas.

In 2013, a Ferrari mule based on the current California T and wearing body panels that disguised it as a shortened 599 was snapped by spy photographers. It’s thought this prototype was an early road-going test mule for the new hybrid system shown in the patent.

The actual patent is for a front-engined, rear-wheel-drive car that has two large battery packs mounted under the floorpan. Although the rear-mounted dual-clutch automatic gearbox is conventional, it also has an electric motor attached to it in a layout that’s similar to the 599 Hybrid concept’s.

The big difference with the proposed car in the Ferrari patent application is the size of the battery pack. The 599 concept had two small lithium ion batteries, which had a combined capacity of just 3kWh. By contrast, today’s plug-in hybrid Volkswagen Golf - a much smaller and lighter car- has an 8.8kWh battery.

This patent shows how Ferrari engineers have tried to solve the problem of needing a much bigger battery pack. The engineering hurdle was trying to squeeze the batteries into a compact supercar that has a space-hungry transmission at the rear. Using a large battery pack under the floor was probably ruled out because Ferrari needs to be able to mount the seats as low as possible.

The solution is a series of individual cylindrical cells, which are mounted together in a herringbone pattern in a single layer and built into the floor structure. Much of the patent detail applies to a ‘support matrix’ in which the individual batteries are mounted. This is thought to be the key to being able to mount the battery packs so close to the car’s sill.

In the event of a side impact, the batteries need to be adequately protected from the consequences of the crash forces. To this end, aside from the large sill beam shown in the patent drawing, Ferrari’s engineers have come up with a new ‘support matrix’ for the batteries and a clever way of connecting the individual batteries together.

These battery connections are described as ‘disconnecting plates’, and should they become ‘disrupted’ in the event of a big side impact, individual batteries become disconnected from each other. 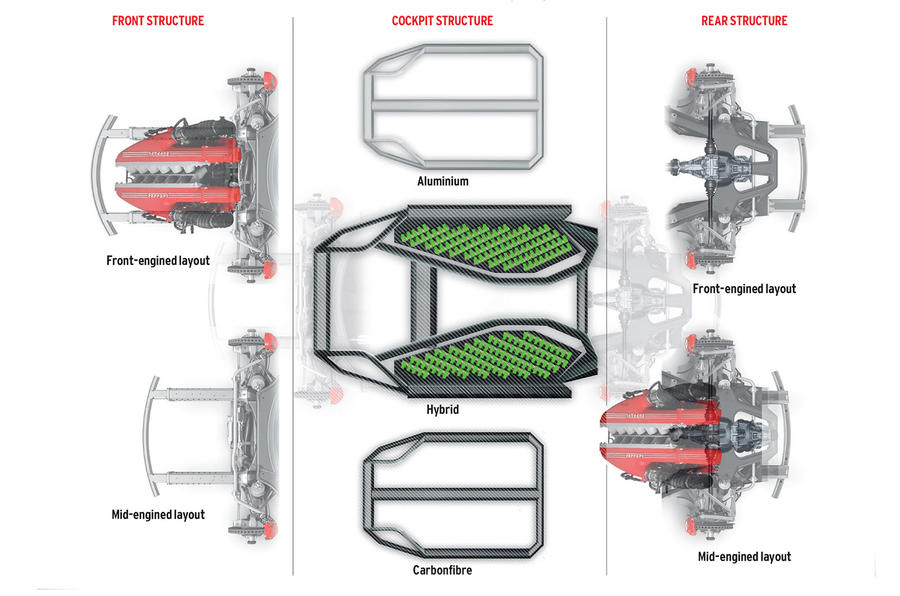 Ferrari’s patent says: “The chemical batteries that are displaced [in an impact] automatically disconnect from the electric circuit, thus reducing the risk of short-circuits or electrocution.

“Therefore, after the crash there are many chemical batteries not connected to one another, thus individually having a moderate electric voltage.”

This means the risk of electrocution after an accident is low, because the individual batteries are relatively weak. Only when they are all connected together do they create enough energy to drive the car via the electric motor mounted on the gearbox.

There’s also evidence that Ferrari could be preparing to build all of its future models - both front and mid-engined - around a common structural cockpit module.

Ferrari has patented a new construction method that would allow a car’s front and rear superstructures to be bolted to the central cockpit.

There are a number of advantages to this method of construction, including shortening build time in the factory and making major repairs easier. In addition, it’s a mechanical fixing technique that will work with any mix of composites, steel or aluminium.

However, it also means that Ferrari can save significant sums by building a common central cockpit structure, which could be used with both future front and rear-engined cars. It also seems likely that this common cockpit will be able to accommodate the new Ferrari battery pack technology.

The upshot is that Ferrari will make significant savings on future model development with this common cockpit, and its likely ability to also accommodate battery packs would allow hybrid versions of all future Ferrari models using this modular platform.

There’s probably no purchase more discretionary than a supercar, and Ferrari’s product planners and futurologists know it. The company needs to ensure it is attractive to a new generation of wealthy consumers raised in a very different world.

There’s plenty of evidence that the globally richest 1% are much greener in their outlook than any other group. They are likely to be less interested in motorsport, including Formula 1. Tesla’s success in sparking a market for high-end, low-CO2 cars has pushed automotive giants such as Porsche and Audi to respond. And many in the car industry expect some city-centre areas to become zero-emissions zones, making 10 or 12 miles of battery-powered running essential.

So Ferrari is laying the foundations for a future when all of its models will come with the option of a hybrid transmission. More to the point, Ferrari is now a publicly quoted company. Its shareholders will be expecting it to futureproof itself and its profits.

The 1% are responsible for

The 1% are responsible for more consumption and pollution per person than any other group. I hardly think they are 'greener' in outlook - but perhaps they are keen to mitigate the consequences of their enormous consumption of resources.
xxxx 11 February 2016

The real reason for production hybrid

Is they can't be seen as being left behind by Porsche, McLaren and new Honda on the tech/performance front.
Bullfinch 11 February 2016

I can believe "the globally richest...are likely to be less interested in motorsport, including Formula 1." - if you're cash rich but time poor, why waste it watching telly and eating pizza? - but Ferrari depends on its racing heritage to differentiate itself from a mass of wannabe brands. Also one wonders if that green thing extends as far as their megayachts and personal jets. I'm guessing not.