This grainy picture claims to show the upcoming GTO version of the Ferrari 599.

The Ferrari 599 GTO was expected to be shown earlier this month at the Geneva motor show, but instead Ferrari revealed a hybrid version of the V12-powered supercar.

The GTO will be a more focused version of the 599 than the current GTB and HGTE models, and was confirmed by Ferrari boss Amedeo Felisa on a trip to Australia last month.

Power will likely be north of 650bhp, with a similar rise in torque and performance.

Weight will be reduced to less than 1650kg, and the car will also likely feature the higher performing ferous iron brake pad technology pioneered on the hardcore 599XX model plus, perhaps, the more aggressive gear shift software and certain elements of the aerodynamic upgrades seen on the 599XX.

Expect a price tag between £250-300k, depending on options and deliveries could start as early as June, according to previous reports. 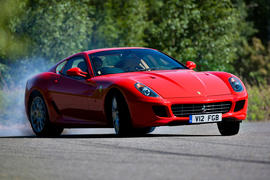 Looks like something Burt Reynolds would have driven in the 1970's

So put a stripe on it and some louvres in the bonnet, some Carlos Fandango wheels and chrome exhaust and charge double the price?

I salute them and pity the poor fools that buy it. They are the types that used to do it to their Capris in their own garages.