BACK TO ALL NEWS
Currently reading: Euro NCAP's Kia Venga caution
UP NEXT
Audi A9 E-tron: electric luxury saloon due in 2024

Kia Venga buyers are being asked to contact their local dealer to have a safety modification fitted.

A problem with the Venga's restraint system was highlighted during recent Euro NCAP crash tests. After the frontal impact test, Euro NCAP discovered a cut in the webbing of the driver’s seatbelt, and concluded that this had been caused by ‘interaction’ with the seat runners.

In total, around 2100 Kia Vengas are affected.

To solve the problem, Kia has produced a polypropylene sleeve to be added to the belt, and is asking all owners to return their car to the dealer to have this fitted, as well as delaying delivery of all new cars until the modification is fitted.

Despite this, the Venga earned a four-star rating in the tests, but Dr Michiel van Ratingen, secretary general of Euro NCAP, said: "Any reduction in the performance of the seat belt not only poses a serious risk to the driver and passenger, but also compromises the validity of the Euro NCAP rating awarded to the car. Customers must ensure that the modification is fitted, so that the four-star rating applies."

Following the organisation’s introduction of higher standards for its star ratings this year, only the Toyota Verso scored the maximum five stars in the latest tests.

The Seat Exeo and Nissan Cube scored four-star ratings. The Seat did well in protecting pedestrians and infants in the rear, but was criticised for stiff structures in the dashboard. The Nissan Cube was let down by its child occupant protection during the frontal impact test.

The Citroen Nemo Multispace, a commercial vehicle-based family car, earned just three stars overall. Itts score of 59 per cent for adult occupant protection was attributed to the lack of standard curtain airbags and poor whiplash performance of the seats. 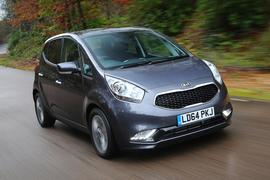 oh great its just out and problems like this already! possibly getting too big to quick Kia?

a 4 star safety rating on a small light car is inexcusable really. They are already at a severe safety disadvantage anyway. Manufacturers should be able to make all small cars gain a 5* rating

I won't be surprised if this is on the news by tonight... it's still a safety recall!

[quote Mini1]I won't be surprised if this is on the news by tonight... it's still a safety recall![/quote]

The only reason such a fuss was made out of Toyota was because they brag about their reliability. It was what they offered. If you wanted style, you could get a ford, or a vauxhall. Toyota brought Reliability to the table and didnt really offer much in the way of style or desirability.

Like at school, when the kid who always got A's got a C - a big deal is made out of it, but nobody cares about the kid who usually gets a C.

Basically the moral for Toyota is, if you want to brag about somthing, best make sure you keep it up.

[quote fhp11]a 4 star safety rating on a small light car is inexcusable really. They are already at a severe safety disadvantage anyway. Manufacturers should be able to make all small cars gain a 5* rating[/quote]

Agreed 5 Star should be achieved. However I believe they messed with the scoring percentage system recently making it much harder, this 4 star car may well be as safe or even safer than many of last years 5 star rated cars.

NCAP are not brilliant at making fair systems.