BACK TO ALL NEWS
Currently reading: Electric Volvo XC90 successor on track for late 2022 reveal
UP NEXT
Lotus Emira vs Porsche 718 Cayman

The unconventionally shaped successor to the hugely popular Volvo XC90 SUV is due a reveal in the final quarter of 2022, Volvo bosses have confirmed.

The Swedish marque's financial report for the first quarter of 2022 revealed a dramatic dip in profits in light of the supply chain crisis, rising material costs and factory shutdowns, but it remains committed to rapidly ramping up its electrification plans on the way to selling 600,000 pure-electric cars annually from 2025.

The new SUV flagship, as the marque's first totally bespoke EV and the first atop a new platform, will play a fundamental role in this ramp-up, and asked by Autocar if it was still on track to arrive in 2022, Volvo CEO Jim Rowan said: "We are very much on track. We've made commitments that we would be launching a certain amount of vehicles every year, and we'll make the decision on when we release that, but the fourth quarter this year is when we will release more details on that product.

"It's a very exciting time for us because it takes us into another sphere - it's another building block towards the future. That model itself is an extremely important vehicle for us."

Following Volvo's earlier confirmation that the new arrival will take a name, rather than an alphanumeric designation into production, a recent filing suggests it will be called the Embla.

The manufacturer filed a trademark application for the name with the European Union Intellectual Property Office late last year. A Volvo spokesperson refused to confirm the brand's intentions for the nameplate, but with the model's reveal date approaching and given that ex-Volvo boss Håkan Samuelsson already confirmed its name will start with a vowel, it seems a likely outcome. 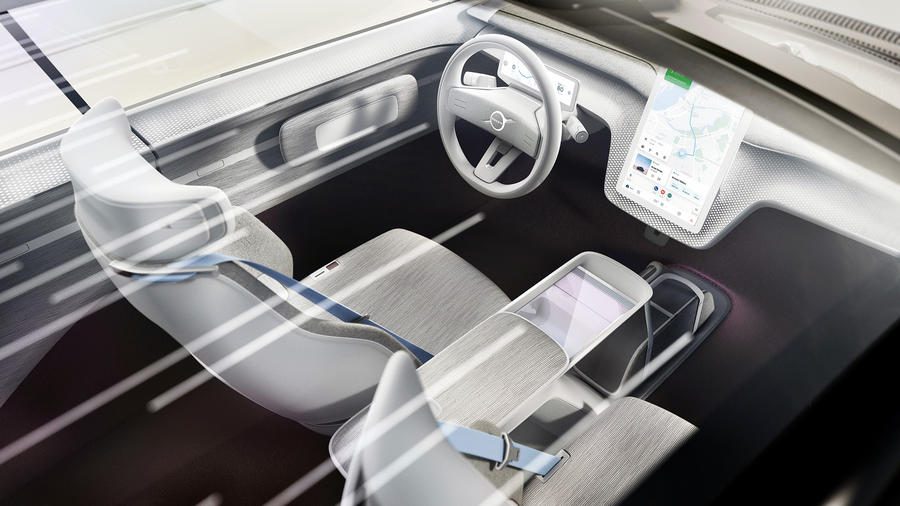 Embla was the name of the first woman in Norse mythology, which could signal a naming strategy for future models centred around Volvo's Scandinavian heritage.

A production-ready version of the bold Concept Recharge shown in 2021, the new arrival will provide Volvo with a long-awaited entry into the increasingly important full-sized electric SUV segment, into which most premium-oriented manufacturers have launched their debut EVs in recent years. Volvo’s existing pure EVs, the Volvo XC40 Recharge and coupé-backed Volvo C40 Recharge, sit a segment lower and use the same CMA platform as the conventionally fuelled XC40.

Meanwhile, the XC90 successor will use Volvo’s new SPA2 platform. This evolved version of the current car’s architecture will accommodate a choice of combustion and pure-electric powertrains. It will be the first production car to use the new underpinnings before they are rolled out to other Volvo models and sibling brands owned by parent company Geely Auto. As part of a new platform-sharing agreement, Geely will in turn offer Volvo access to its latest SEA architecture.

The Concept Recharge heavily hinted at how Volvo will ensure its new flagship EV retains the XC90’s core characteristics while ushering in a totally new approach to exterior and cabin design, as well as a host of advanced new technologies. The Swedish brand’s biggest model remains a consistently strong seller, even as the current, second-generation car enters its seventh and final year on sale. In the first 10 months of 2021 alone, the XC90 accounted for around 6.5% of Volvo’s global sales, putting it third only to its Volvo XC60 and Volvo XC40 SUV siblings.

So although the XC90 successor will adopt a radically different design, it will continue to major on space and practicality. The ‘less is more’ approach exhibited by the concept points to an enhanced focus on minimalistic design in Volvo’s new electric era, as well as a drive to minimise the well-to-wheel environmental impact of each vehicle it produces.

Unlike the vast majority of mixed-powertrain platforms currently on the market, the SPA2 will be offered in two distinct forms. This will allow the electric XC90 successor to benefit from a completely flat floor, shortened overhangs and a more overtly cabforward stance, whereas the combustion-engined versions will have slightly more familiar interior proportions, given the need to accommodate an engine, transmission and exhaust system.

Some of the concept’s more outlandish and futuristic cues will be toned down for production – the four free-standing seats, for example. However, the skateboard-style architecture will offer new levels of interior space and flexibility, which concept designer Robin Page likened to a “Scandinavian living room feeling”. To that end, the production car will ditch physical controls for a cleaner and simpler driver environment. Most of the functions will be controlled through a large-format central touchscreen using operating software developed by Google – as first adopted by the XC40 Recharge and Polestar 2.

However, Volvo’s next SUV will not be so easily categorised as an SUV because, although it sits high off the ground and emphasises all-round visibility like the current car, it has a straighter-edged two-box silhouette reminiscent of estate cars such as the 240, 940 and Volvo V70, which once ranked among the Swedish marque’s most important and best-selling models. Company boss Håkan Samuelsson recently told Autocar that Volvo will gradually downsize its conventional estate offering – currently comprising various forms of the Volvo V60 and Volvo V90 – in recognition of the simple fact that “people really are fond of high seating positions”.

The XC90 successor will therefore straddle the boundary between two segments to capitalise on the popularity of SUVs while differentiating itself from rivals and avoiding alienating buyers of lower-slung models. Page called it “a new type of vehicle”, which “displays new and modern proportions that go hand in hand with increased versatility” – hinting at the potential for other Volvo models to follow suit in blending design cues from different segments.

Volvo remains guarded about details of the new car’s powertrain offering, but the firm’s well-publicised push to reduce emissions across its line-up means all combustion variants will feature some form of electrification, be they mild hybrids or plug-in hybrids. Diesel will not be offered at all. It remains an option on certain Volvo models but will be phased out entirely as the brand’s line-up is refreshed.

The electric variant, meanwhile, could usher in entirely new powertrain setups distinct from those offered on the CMA-based XC40, C40 and Polestar 2 EVs, while four-wheel drive is highly likely to be standard, given its large SUV billing. Volvo will offer a choice of battery sizes on its new EVs, giving buyers the option of standard and long-range versions, the latter capable of travelling up to 310 miles between charges. 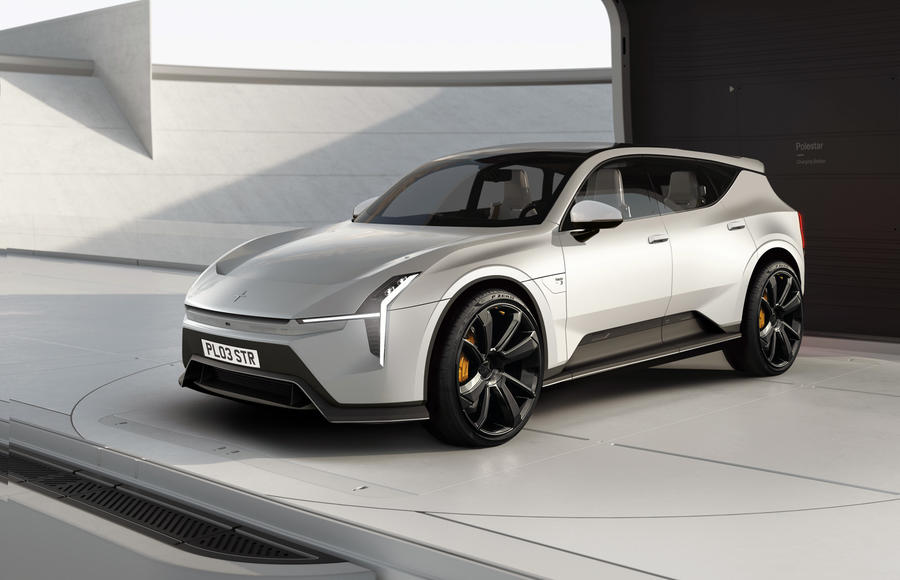 Electric performance brand Polestar will use the SPA2 architecture for its crucial second series-production model, the 3 SUV, as it continues to differentiate itself from part-owner Volvo.

Although the Polestar 3 and the XC90 successor will be close relations technically, Polestar’s own take on the large electric SUV will feature a unique design and interior set-up, as well as distinct performance and dynamic characteristics.

The first hint of the 3’s final look came with the unveiling of the Precept concept in 2020. Although that car has itself now been confirmed for production in 2025 as the 5, Polestar’s new SUV will still draw heavily on its defining design cues, namely its sharp-looking front end, its coupé-style sloping roof and the raised wraparound rear light bar.

A recent preview image of the 3 left much to the imagination but it gave further clues about how it will be set apart from its Volvo sibling. Polestar CEO Thomas Ingenlath said the model’s defining characteristics will be its “incredible power and stance”.

The 3 will be sold exclusively as an EV, as with its 2 sibling, and Ingenlath confirmed to Autocar that while the Volvo will be offered with seven seats, the 3 will have only two rows of seating in line with its sportier and more luxurious positioning.

For the same reason, the 3 will get more power in top-rung guises, allowing it to compete more effectively with hot electric SUVs like the Audi E-tron S and upcoming Porsche Macan EV. Single- and dual-motor powertrains will be available, catering to customer preferences in different regions, so the 3 will essentially give the same standard- and long-range offering as the 2.

The 3 will be simultaneously produced for the US alongside Volvo’s electric SUV in Ridgeville, South Carolina, and for various other global markets, including Europe, at Polestar’s own facility in Chengdu, China, which will keep production and shipping costs down while minimising the car’s environmental impact.

Due on sale in the first quarter of 2023 after a reveal in 2022, shortly after the Volvo, the 3 is expected to command a premium over its sibling at a starting price of £64,000, which will make it the top-rung Polestar model until the 5 arrives in 2025.

I refer dear readers to the answer I gave in January below.  I really hope they haven't ruined what makes the current XC90 so great - light, airy, 7 good seats and great family layout (high rear seats, inbuilt booster seat, good view out for all people).  I fear the new design will feel claustrophobic in row 3 and cause travel sickness.  Please prove me wrong Volvo or my next car will be a different brand!

Classic?, do we think turning out the same new Car designs with the subtle hint of retro sell a Volvo?, what about the current or future potential Car owners, might they be put of a Volvo because it looks a bit dated?, this new Volvo coming looks good and I'm sure Volvos innovative tech will be good to, but, really shouldn't be wrapped up in a comfy pair of Slippers so to speak.