BACK TO ALL NEWS
Currently reading: David Brown launches hot version of Mini Remastered
UP NEXT
Volkswagen ID 3 vs Nissan Leaf: Battle for the EV top spot

The Oselli Edition has been modified by classic motorsport specialist Oselli. It features an uprated version of the original A-Series engine but with capacity increased from 1.0 litre to 1.4 litres for a power output of 109bhp – a 40% increase over the standard Mini Remastered unit.

Alongside the addition of a fifth gear for lower revs at higher speeds, the Oselli Edition receives a revamped exhaust and air intake system to cope with the extra power.

Underneath, there are Spax adjustable performance dampers, wider wheels and tyres and an upgraded braking system comprising four-piston calipers at the front and alloy drums at the back.

Buyers can choose from two bespoke paint schemes inspired by historic motorsport liveries, with the option of grey or white for the main body and red, blue or green for the racing stripes. The engine cover will be painted to match the chosen stripe colour, while chrome trim is replaced with black pieces to mark out the special edition.

Further visual differences from the regular model include build number markings to the front and rear and a pair of rally-style spotlights in the grille.

The Oselli Edition can be specified as a two or four-seater, with the option of a hand-trimmed roll cage for track use. Seats will be trimmed to match the exterior stripes and can be fitted with conventional seatbelts or a race-spec four-point harness.

Mini at 60: its greatest spin-off models​ 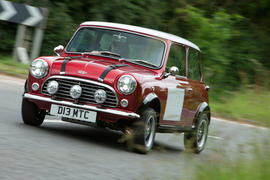 A hundred grand for a mini.

A hundred grand for a mini. People have lost their minds.

A hundred grand for a mini. People have lost their minds.

I read elsewhere they are all sold out. I would also go with the KAD twin cam head at the price they are charging.

9 September 2019
Each one involves a genuine mini being converted into something ridiculous for the very wealthy.

As a classic mini fan all my life, I can't stand these. I'm sorry.

Fantastic job, but at that price?