The government must take firm control of the expansion of the UK’s EV rapid-charger network or it risks the project failing, Britain’s biggest manufacturer of charging points has warned.

"Private enterprise is willing to do as much as we can, but we need much clearer policy on costs and charges if we are to invest," said David Martell, boss of Chargemaster, at an industry event last week. "All this is very unclear now."

One of Martell’s major concerns is the set up of a free to use £15 million trunk road rapid-charger network announced by the DfT and Highways Agency last year. "If a government body is going to provide a free nationwide network, where does that leave private involvement in EV charging?" said Martell.

Martell would prefer that the government uses funds to allocate sites and upgrade the local electricity grid infrastructure, and then have open tenders with private companies for the operation of the chargers.

"Government should lay the groundwork and set a policy for private enterprise to operate within," he said. "A free nationwide network of chargers will discourage private companies."

Rapid-chargers are the breakthrough technology to push EV ownership into the mainstream because they top up a battery to full in just half an hour, making long distance journeys a more practical proposition.

However, rated at 50kW, compared to the typical 7kW street-side unit, they cost more than 10 times to install, raising the cost of investment to around £20,000 per charger. They also drain so much energy from the power grid that locations, such as service stations, need major upgrades to their electrical circuitry.

Martell wants the government to invest in the infrastructure, leaving the charger manufacturers to fund the chargers - costs it will recoup with a tariff for EV drivers. "It has to be recognised that the days of free charging for EV drivers are coming to an end," says Martell.

Chargemaster’s rival Ecotricity leads the way in rapid-chargers, with around 170 units concentrated at motorway services, but it is also understood to be considering asking EV drivers to pay for top-ups.

The Highways Agency’s proposed rapid charger network is part of a £900m a year budget administered by OLEV, the Office of Low Emissions Vehicles, to promote ultra-low-emission vehicles.

Much of this budget is spent on the £5000 per car subsidy for EV and plug-in hybrid buyers, but significant sums are being sunk into the EV charging network, clean buses and vans and carbon-saving technology. Gordon Murray Design, for example, received a grant to help development of a new recycled carbonfibre material. 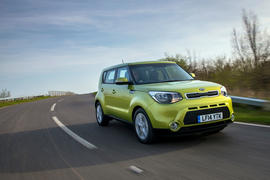 ..... is that if the Highways Agency install a network of free chargers on the motorway network, which sounds like a sensible arrangement to me, then drivers will be reluctant to use a network, like his, that charges for the power that is used. But I think he has to realise that as an incentive to get people to buy non-poluting (even if only at point of use) electric cars then this would be a good way to encourage people. No reason why the Highways Agency could not in future charge for use once there are more of the vehicles on the road. The big attraction of electric cars is their low running costs compared to petrol/diesel cars. Most of my car journeys are of less than 30 miles round trip so an electric car would be great, I've just never actually seen any charge points near where I live.
EndlessWaves 25 March 2015

We haven't even worked out how to cheaply mass produce it yet.

On the subject of charging points electricity is still at the point where it could sink without trace as easily as LPG did so I think we do need central investment. No doubt that'll mostly get sucked into the most dense urban areas that need it least like everything else (broadband etc.) so there should be plenty of opportunity for private companies to cover the rest of the country.