BACK TO ALL NEWS
Currently reading: Caterham Superlight Twenty to celebrate edition’s 20th birthday
UP NEXT
Nissan will build batteries in UK to sustain Sunderland plant

The Caterham Superlight Twenty has been released as a 20th-anniversary edition of the Superlight, with production limited to just 20 cars.

The Superlight Twenty is being launched at the Goodwood Revival and comes with a 135bhp 1.6-litre Ford Sigma engine, a six-speed manual gearbox and some weight saving measures, and claims to offer a raucous experience similar to that of the original. The car now accelerates from 0-60mph in 4.9sec and hits a top speed of 122mph.

The special edition comes with its body finished in bare aluminium and features carbon fibre components including its cycle wings, rear wings and nose. These changes add up to a 6kg weight saving.

Sport suspension, a lightweight flywheel and a limited slip differential come as standard. Special features include a numbered dash plaque and unique gauges, key and gear knob with the models motif. Carbon fibre seats from the Seven 620 R have been fitted, with special embroidery.

The original Superlight was launched in 1996 with production ending in 2004, when Caterham changed its offerings to more track-focused cars with even more performance.

The Caterham Superlight is priced from £29,995 and is available to order now. 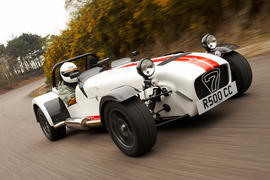 The Caterham Superlight scintillates with simplicity. There's little quicker or more focused for the price